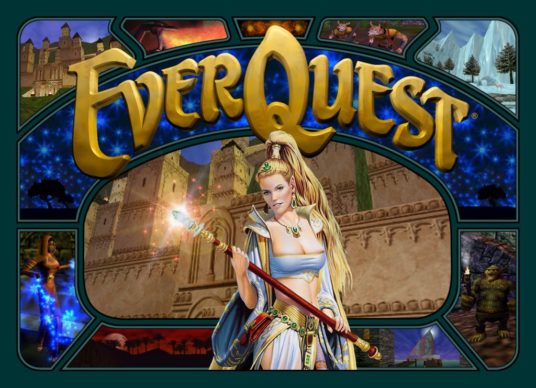 We talk about the good ol days of Everquest when you could sell your account and buy real life items!

END_OF_DOCUMENT_TOKEN_TO_BE_REPLACED

Sony said settlements that are successful remain in the game forever, so what happens if you fail? Can you imagine the crying that will go out if you see videos of a successful settlement and you think it is really cool, but on your sever for whatever reason it failed? Would the risk vs. reward people find it cool that it was even possible to fail or will they be mad they have such “terrible players” that they could not even finish the settlement causing issues within that severs community?

END_OF_DOCUMENT_TOKEN_TO_BE_REPLACED

It will be the largest sandbox style MMO ever designed. The same exciting content delivered in a new way. Something you’ve never seen before. The MMO world has never seen before. We didn’t want more Kill 10 Rats quests. We didn’t want more of the same. If you look at the MMOs out there, they’re delivering the same content over and over again. So are we. We need to change that. When we released EverQuest, we changed the world. We want to do that again with a different type of game.

END_OF_DOCUMENT_TOKEN_TO_BE_REPLACED

So for many when a new MMO is announced, especially if you have not played an MMO in a while and have friends interested in giving it a try. You end up putting more than hopes of a good game on the product. People hope it will rekindle that fire, bring friends back together, improve your life and games by themselves cannot do that. There are documented reports that leaving an MMO can end relationships, friendships and even marriages so it is understandable that people think an MMO might create what it can also destroy.

END_OF_DOCUMENT_TOKEN_TO_BE_REPLACED

Also at the free-to-play launch, all players will receive a Welcome Pack containing items to add to your gameplay experience. You’ll be able to summon a unique Mercenary to fight by your side and we’re including some Bayle Marks to help pay for the services of your newly summoned Mercenary. A couple of Experience Potions are also included to help you increase your experience gained while adventuring. For all the collectors that like to show off all the great wares to your friends, we’re giving you an item to display in your home and add to your collection. And finally, you’ll be able to customize the appearance of one of your weapons with a Weapon Ornamentation – also included in the Welcome Pack. So be sure to check the claim window for your free gifts.

END_OF_DOCUMENT_TOKEN_TO_BE_REPLACED

My prediction, games will get smaller not larger. Remember the, it’s time to slay the dragon commercial for EQ? Sure, it was made fun of, but there was something important there. It was about 5 or 6 friends coming together in a game. I believe that is our future. The large raids and guilds of 200 plus members are over. MMO’s will become games where you can solo and then call a few friends to do larger content.

END_OF_DOCUMENT_TOKEN_TO_BE_REPLACED

Fast forward to the early days of Everquest, when the decision was made to raise the price of their monthly subscription. The player base revolted saying EQ would be done for if this move was made, but as how addiction works, we continued playing.

END_OF_DOCUMENT_TOKEN_TO_BE_REPLACED

We write to you today to inform you that on December 15, 2011, Sony Online Entertainment (SOE) and LucasArts will end all services (MMO and Trading Card Game) for Star Wars Galaxies (SWG). The shutdown of SWG is a very difficult decision, but SOE and LucasArts have mutually agreed that the end of 2011 is the appropriate time to end the game.

END_OF_DOCUMENT_TOKEN_TO_BE_REPLACED

For those of you waiting for this review after the sudden ending of the previous portion of this two-part article, I apologize. I wasn’t having problems with time or just pure laziness. No, I had problems with how to word my feelings towards Star Trek Online and how best to give an honest review without completely belittling the game. I know, I know. You’re used to that kind of response from me but I decided to be a bit more delicate with how I explain the faults and pluses of STO.

END_OF_DOCUMENT_TOKEN_TO_BE_REPLACED

I know I could easily deny myself of these experiences if I only made my own group and wrote off some of these people with my own iron fist ruling. Trust me, I have! I don’t take shit when I’m group leader. I don’t like having my time wasted while someone is eating shit in real life. This is my break before real life kicks in and you’re ruining those precious few hours I have. There are just sometimes where it’s easier to join an already forming group than taking the reins into your own hands.

END_OF_DOCUMENT_TOKEN_TO_BE_REPLACED

We all know what’s going on with Sony. For those of you who don’t know, you either don’t game or you live under a rock. The greatest hacking escapade of 2011 has left the company’s loyal consumers hanging on the sideline while they hope to the heavens that their credit card info hasn’t been sold to the highest bidder. If you haven’t cancelled your credit card, asked for a new number, or put out a fraud alert by now it’s best advised you do so now.

END_OF_DOCUMENT_TOKEN_TO_BE_REPLACED

In those golden days, PvP wasn’t about fighting another player for hours. It wasn’t about outlasting foes. It was like how PvP was in almost every other game in existence, including FPS. Fights were quick and fast paced. It wasn’t about every player being Batman and trying to pull off as much bullshit as possible. It was about an Enhancement Shaman with Windfury WTF raping their way to victory. It was about the Mage hiding in the back charging up a Pyroblast combo. It was about a rogue hiding and doing what rogues do best, assassinate.

Video game manuals. If you’re over the age of 19 you know what they are and what they used to be like. For those younglings who are reading this who have yet to have had their balls drop, video game manuals consisted of more than “THIS BUTTON SHOOTS AND THIS BUTTON JUMPS!” and the repetitive warnings of “Hey just to let you know, you could have a seizure playing this game.”

END_OF_DOCUMENT_TOKEN_TO_BE_REPLACED

There are also level 50 zone events in the high level zones (and more will be added constantly). Initially, one 20-player raid instance has been released (with more coming over time). There are crafting recipes to continue to collect. Artifact collections to continue completing. Achievements to obtain. Rare crafting recipes to be discovered. Then there’s the level 50 PvP warfront (The Battle for Port Scion), the PvP Prestige leveling system, and so on.

END_OF_DOCUMENT_TOKEN_TO_BE_REPLACED

However, when it comes to some of the music there is no rose colored glasses needed. The music of EQ was excellent from Kelethin to TOV. The funny thing is many people later turned the music off or very low and missed out on many of the awesome tracks that were added to this game.

END_OF_DOCUMENT_TOKEN_TO_BE_REPLACED

It’s Saturday! You know what that means! Time for Umar to rant about something that terrifies or pisses him off. Today, he forcefully tries to sway your opinion on Underwater based quests and dungeons in MMORPGs!

It seems much more frequently nowadays that many MMORPG companies have been accepting their losses and got off their high horses to adopt the Free to Play model. Is this a good thing or a bad thing? Does it really help them bring in a larger player base? It certainly seems to be working for many of these companies but will it be accepted wife spread for future games?