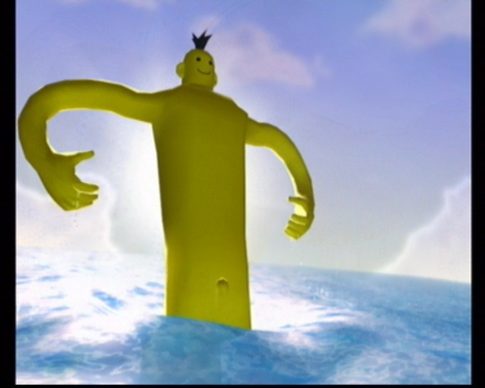 Doshin the Giant managed to suck me into its world entirely. At its core the game is incredibly simple, yet somehow utterly compulsive: you play a friendly yellow giant whose aim is to help four tribes scattered across several islands. The villagers’ requests are pretty simple – they generally amount to raising or lowering the ground or moving trees about – and every time you help them out they send a bit of love your way. The more they love you, the bigger you get, so that by the end of each ‘day’ in the game Doshin is usually towering above even the highest mountains. However, come the next day, he always reverts to his original size, although all the changes you made to the islands remain the same.

END_OF_DOCUMENT_TOKEN_TO_BE_REPLACED

The game also made use of Sonic’s friends and enemies being forced upon the player. You can pick between four teams of three. So you had the good team (Sonic, Tails Knuckles), the evil team (Shadow, Rogue, Omega), the girly team (Amy, Cream, Big), and the weird team. The last team was comprised of the awful characters from Knuckles Chaotix. I have to give Sega credit for bringing back such strange characters for no reason.

END_OF_DOCUMENT_TOKEN_TO_BE_REPLACED

Don’t get me wrong, Twilight Princess is an absolutely brilliant game, but whereas Wind Waker was a breath of fresh air that drew me in from the very beginning, Twilight Princess feels a little samey and derivative. The designers have obviously done their best to throw in a few new gameplay elements, but many of them fall flat – the sections where you play as a wolf, for example, just aren’t as much fun as playing in your human form, and of course they pale a little in comparison with the wonderful Okami

END_OF_DOCUMENT_TOKEN_TO_BE_REPLACED

Puzzles are a mixed bag. The majority are nothing too taxing, but the way the game squeezes as many ideas as it can out of Luigi’s limited moveset is admirable. But occasionally you do feel the game is struggling to design a puzzle that is different enough to a previous one. This doesn’t really detract from the experience to any significant degree though.

END_OF_DOCUMENT_TOKEN_TO_BE_REPLACED

That reason was because Link from the Legend of Zelda was a playable character. Spawn was in the Xbox version while Heihachi from Tekken was in the PS2 version. I remember some fanboys of the other two systems saying Link didn’t even fit in the SC universe. Yeah I’m sure a weaponless fighter and an african-american demon from hell are perfect matches too. Link fit well with his master sword, bow, and bombs.

END_OF_DOCUMENT_TOKEN_TO_BE_REPLACED

The second Paper Mario game has an epically long quest with lots of quirky humor (there’s a tranny ghost who has a crush on Mario; I’m completely serious), and interesting characters. Be warned that the difficulty jumps for no apparent reason right at the end. Other than that, I can say that Thousand Year Door is a worthy successor to not only Paper Mario, but Super Mario RPG.

END_OF_DOCUMENT_TOKEN_TO_BE_REPLACED

I think my favorite part was the crimson head zombies. The regular zombie was no longer a threat, so after a few easy 9mm caps in their butts they go down easy. However after some time, the zombies revive into nastier and stronger version of themselves. The first time you see one of these guys wake up, will make you paranoid about burning or beheaded every zombie you meet.

END_OF_DOCUMENT_TOKEN_TO_BE_REPLACED

Most of the gameplay revolves around traveling the world fighting other Cubivore’s and ripping off their libs. You also collect hearts throughout the game that will allow the female Cubivore’s you mate with to have children. The process of mutation and creating offspring actually has a strategy to it even if the combat itself is simple.