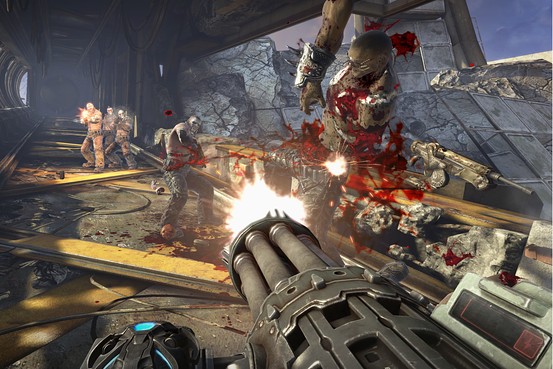 In the wake of the Newtown, Connecticut shootings in December, the debate over violent video games is being waged once again.

Just before Christmas, National Rifle Association spokesman Wayne LaPierre made controversial remarks about violent video games in a public press conference. Over the past week, Vice President Joe Biden invited representatives from the video game industry to a panel discussion about the gun control and violence topic. On January 10, New Jersey governor Chris Christie also noted violent video games as what he believes to be a factor in violence.

“You cannot tell me that a kid sitting in a basement for hours playing Call of Duty and killing people over and over and over again does not desensitize that child to the real life effects of violence,” Christie said.

The topic of video game violence has been going on almost since the day the general public first became aware of video games. In 1976, Exidy’s Death Race became the first video game to spark such discussion. A game which challenged players to run over stick figures with cars,Death Race made national news headlines on shows such as 60 Minutes and created such an outcry that many video arcades removed the game.

“In this game you’re a stick figure with a handgun,” Radecki said in 1981. “The object is to kill as many other stick figures as possible before they kill you. This type of role-playing practice is certain to have long-term harmful effects on the player. It teaches violent reactions. These games are training the next generation of Americans to be even more violent than our current adult generation, already the most violent in American history.”

According to a FactCheck.org posting on December 20, there were 3.59 gun murders per 100,000 people in 2010, the lowest rate since 1981, the same year Dr. Radecki made his statement about Berzerk and similar video games.

A number of gamers from the 1981 generation of grew up to become lawyers, business owners and doctors. Joel West, the 1982 world champion on Berzerk, is a conservative Christian and father who still plays the classic today. Another notable name who has made a living in the gaming world says despite thousands of hours of gaming, including Berzerk, he did not turn out violent.

“Berzerk was one of my favorite arcade games back in the early eighties,” said former Electronic Gaming Monthly writer ‘Trickman’ Terry Minnich. “Today, I own an original Berzerk machine and it is still one of my favorite games. I’ve played every type of game. No matter how bad I am doing, I never kick or punch the machine or throw a controller in anger. I never have and don’t believe I ever will.”

Minnich went on to point out that some members of the early gaming generation, instead of becoming violent, went on to create a major impact on the world today.

“Some of the first geeks and nerds started in that generation,” he said. “The famous ones went on to found Apple and Microsoft and helped usher in the technology we enjoy today. I think that generation turned out pretty well overall.”

What game would you teach your child?