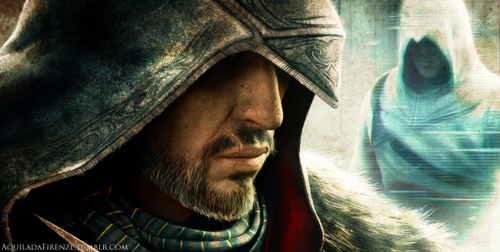 What began as an innovation from Ubisoft with Assassin’s Creed in 2007 became an award winning series with over 28 million units sold. Among the awards given to Ubisoft for Assassin’s Creed: Brotherhood were IGN’s E3 Best Action Game and the Writer’s Guild Award for Best in Video Game Writing all in 2010! The same year Brotherhood also raked in the Best Action-Adventure game of the Video Game Awards. They even added in a little humor for the character winners of their respective awards: Ezio Award Winner Humor.

So…what now? Revelations! According to an interview of the lead writer, Darby McDevitt on CVG, Assassin’s Creed: Revelations will NOT be the end of the series, because it will not answer all our “burning questions.” It is not mentioned in this interview if Ezio’s story will end, however.

Another interesting article that backs and adds to this claim I came across was one in which the AC: Revelations lead game designer Alexandre Breault said that there is no way creating an annual Assassin’s Creed series could “fatigue the franchise”. He more specifically says that “As long as each iteration is better than the previous one, we believe players will want more of it. They won’t say ‘enough of Assassin’s’ as long as the game is better than the previous one.” More of the interview can be seen on Gamerzines.

As much as I would love to play a successful AC game every year, fans have their doubts including I. A few more comforting quotes I want to get down before I end this article are some by the production manager Jean-Francois Boivin:

“We know what we’re doing, we’ve had a plan for a long time where this license is going to go.”

“Assassin’s Creed 3 is yet to be officially announced. Don’t be surprised to see it next year.”

I’m extremely excited, but a little worried as well. By the way, these quotes pretty much make the end Ezio’s trilogy a certainty.

In the meantime, enjoy the Assassin’s Creed Revelations E3 trailer that brings this gamer tears to her eyes every time she watches it. This is from Machinima’s youtube page:

Angelika is an English major who is simply aiming to contribute to the gaming community. Her favorite series include but are not limited to Assassin's Creed, Devil May Cry, and Dragonage.

What video game(s) do you wish would be made but were not?