Tired of swords and sorcery, of level and faction grinds, of dragons and dungeons, well welcome to the apocalypse. Fallen earth combines the depth of a role-playing game with the action of a first-person shooter all set against a post-apocalyptic earth in the year 2156. This online game brings you all the things you like about MMO’s like player advancement, gear and weapons, crafting and clans and kept out the things people hate like grinding for gear and long boring raids.

Recently Fallen Earth released their state of the game address discussing such issues as PVP, new contact and end game raids. Obsolete Gamer had a chance to talk with Marie Croall, Senior Game Designer on Fallen Earth about the game and the coming changes.

Let’s begin with the basics for those who may not be familiar with Fallen Earth. The game is a hybrid of First Person Shooters and Role Playing Games, can you tell us about this combined dynamic?

Marie Croall: All of our weapons use a reticle that you need to have on your target in order to hit them, once you hit them we resolve damage based on stats, skills and resists.

So in a nutshell, the Shiva virus began to spread across the world and nuclear war broke out leaving a wasteland, sounds like the perfect setting for a story. Can you tell us about the world players will find themselves in?

Marie Croall: Fallen Earth takes place 150 years in the future; humanity has just gotten to the point where they are starting to rebuild when clones (players) start showing up. To some, the clones are the solution to all their problems, but to others the clones represent something to be feared or worse – exploited.

There are factions the players can join, each one showing how different mindsets handle the fall of civilization: There are the CHOTA—wasteland barbarians dedicated to returning to the “old ways,”  Enforcers—descendants of military and police forces trying to keep up  traditions, Techs—scientists, scholars and engineers, Lightbearers – spiritual healers trying to calm the warring world, Travelers—racketeers and con men out for their own profit and the Vista—guerilla warriors bent on stopping the exploitation of  the healing Earth.

Each faction has its own allies and enemies, but there is no guarantee that any member will be friendly. Clones have to watch their backs pretty closely in FE.

Now some fans liken the world to Fallout. We know post-apocalyptic lands are not owned by any one game, but were there any influences on Fallen Earth from Fallout or other post-apocalyptic games?

Marie Croall: We’re all huge fans of the Fallout games, but most of our inspiration came from post-apoc and dystopian books and films.  It’s a genre we’re all very much into and favorites range from “A Boy and His Dog” and “Road Warrior” to “Six String Samurai.”  We’re also pretty addicted to the Post-apoc shows on the History and Discovery channels.  “Life After People” and “The Colony” are two of the more entertaining ones.

Can you give us a breakdown of customization and progression in Fallen Earth?

Marie Croall: We are a classless system. As the player gains experience they gain AP which they can put into any of the attributes or skills.  At level 15, players can select a faction, start participating in Conflict towns and begin to develop mutation lines if they choose.

We have a fairly extensive crafting system—about 95% of items are crafted. Scavenging and exploration are large parts of the world and the player experience.

Now the world is open and as far as PVP, there are arenas or you can flag yourself PVP and fight other flagged players, is that correct?

Marie Croall: There are actually three different ways you can participate in PvP. You can flag yourself for world PVP at all times, you can enter Blood Sports or you can enter an open PvP zone out in the world.  The open world PvP zones are usually found with conflict towns (settlements players can fight to control for their faction), or Faction Control Points. Taking a town generates merchants and questors specific to the controlling faction, gaining control of the Faction Control Points gives a buff to faction members.

What would you say is the learning curve to play Fallen Earth; do you have to be a MMO or FPS pro?

Marie Croall: There is a bit of a learning curve, but we’ve worked very hard to make sure that the game is challenging rather than frustrating.  Our player base has MMO players, FPS players and those who are new to both genres. 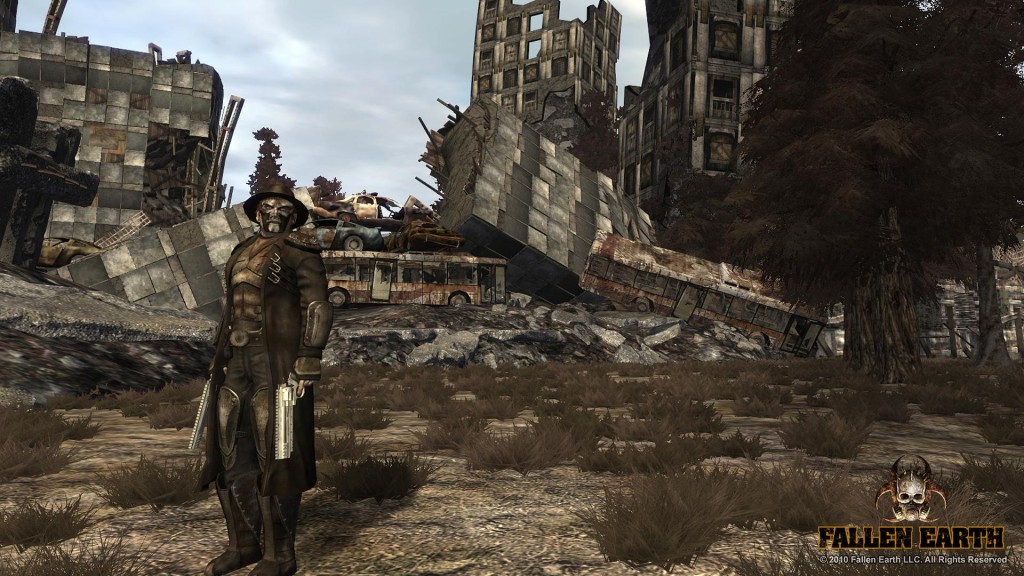 Can you tell us a little about Terminal Woods?

Marie Croall: Terminal Woods is a bit of a bridge between Kaibab and Alpha County. It’s got quite a bit of mission content and introduces players to the Scavenger Bosses—group encounters that players will be able to craft a lure for the Boss. Rewards from the bosses can be used to upgrade existing gear.

Can you give us a hint about some of the long-term projects you plan to add in Alpha County?

Marie Croall: We’ve got quite a few new features coming. Progress Towns, settlements that players can build and defend, World Events and a crafting augmentation system are some of the new features we will be adding.  We will also be expanding our skills set with two new skill lines for players to add to their builds.

How important has feedback from the community been to the Fallen Earth team?

Marie Croall: We work very hard at reaching out to our players, getting their feedback and incorporating it in a way that works for our design and for the benefit of the community as a whole.

Can you tell us about Blood Sports and the changes you are working on?

Marie Croall: The changes we are implementing for Blood Sports revolve around fixing stability and team creation bugs.

About raid content, in your state of the game address you talked about not wanting the have people grind raid instances for gear, what would be a raid style that you feel would fit with Fallen Earth?

Marie Croall: Although we want to maintain the strategic element to battles. we will be focusing on smaller team size  and goals that fit well with the existing Fallen Earth systems.  It’s important to provide compelling motivation.

Can you give us a bit more info on the large-scale instance you are working on to be release post Alpha County?

Marie Croall: I can show you some concept art, but further info gets a bit spoiler-y.

What are some of the classic games the Fallen Earth team likes to play?

There you have it. If you are looking for a new experience in the MMO world then Fallen Earth is right up your alley. You can pick up Fallen Earth using their Online Download for about twenty bucks. The subscription fee for Fallen Earth is $14.99 monthly.

Check out our Gamer Profiles on some of the Fallen Earth team members:

The Interview: World of Tanks