Interviews
February 1, 2012March 15, 2014 Konstantinos Dimopoulos 0 Comments dave barton, Multiplayer Online Games, world of the living dead, zork universe
Dave Barton, one of the creative people beside the recent MMO version of the Zork universe and the latest World of the Living Dead zombie MMORPG, has gone very indie indeed, and has been kind enough to discuss games, zombies and browser-based gaming with a gnome. 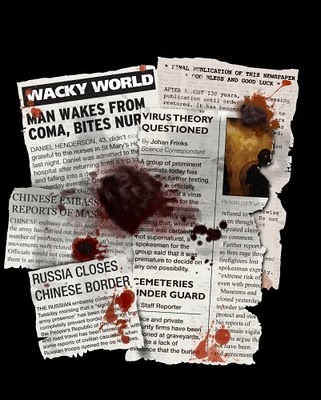 1.Well, David, how about introducing yourself to those troubled souls that seem to enjoy Gnome’s Lair?

I’m one of two developers on a game called World of the Living Dead. I do the game design, graphics, writing and web design, or anything else that needs to be done. We decided to keep this a very small project in terms of people, although the scope of the game itself is extensive. I was the chief game designer on the Jolt/Activision game Legends of Zork, and also worked on the ill-fated NationStates 2. As a regular reader of Gnome’s Lair, I’m rather troubled to hear that I’m a troubled soul…

2.And you’ve been working on games for how long?

I got a Fighting Fantasy gamebook (The Forest of Doom) when I was nine. I loved it and I really wanted to create my own. I wrote three full gamebooks before I was thirteen, just for the pleasure of creating my own little worlds. The first was typed up on an old Olivetti typewriter from the fifties, although I later saved up enough money to buy an electric typewriter. Working out the structure of those books would have been a lot easier on a computer. I really got into the creation of imaginary worlds came when I discovered roleplaying. I went through everything I could find: D&D, Call of Cthulhu, Rolemaster, Spacemaster, Cyberpunk 2020. There weren’t too many role-players where I lived, so I mostly spent my time fleshing out detailed campaigns and maps. Like many games, they didn’t survive the introduction of actual players. They were usually more interested in just killing the townsfolk or otherwise trashing the place, and usually had little interest in the extra immersion I tried to provide, in the form of carefully-aged messages or maps.

Roleplaying gave way to gaming once I got a Spectrum and then an Amiga. I started playing at the tail end of text-based games, when it started to become all about the graphics, so I never really thought I could make my own. The intervening years were spent as a consumer of games. Fast forward to a few years ago and I jumped at the chance to work on games for Jolt, first on UI and art direction then as a game designer. The skills I had learned working in print and online media seemed to come together and allow me to revive my passion for creating virtual worlds. 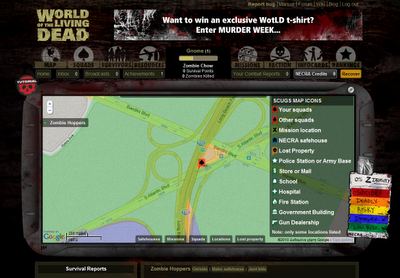 3.Care to reminiscence on that online Zork game you worked on?

It was a privilege to work on an actual licensed Zork game. I had a lot of fun immersing myself in the world and piecing together what could be used for a game based on the series. I was the game designer, but I also took on the role of art director and worked on the UI. The brief was very specific, so it was always going to be a certain type of online game. I know that disappointed a lot of people, but I was very careful to stay true to at least the mythology that had accrued over the various incarnations of Zork, and I tried to make use of elements like the Double Fanucci cards to keep even the game mechanics relevant to Zork. I hope that the excellent artwork created and sourced by Jim Zubkavich – who was a pleasure to work with, always enthusiastic and able to bring my descriptions to life exactly as I had imagined them – helped to make LoZ a pleasurable diversion for some Zork fans. I decided to leave Jolt very soon after the release of LoZ, so the game has developed differently from how I would have hoped.

4.So, what are your current projects?

World of the Living Dead is what we’re focusing on, although we also started a micro-patronage site called Karmafan a few years ago, as we had a lot of artist friends who wanted to get support from their fans but didn’t know how. The whole voluntary payments thing really took off a little later but by then I was working for Jolt and so Karmafan didn’t get the attention it needed to develop. Artists still sign up from MySpace, but times are hard so there isn’t much support from fans. I’m also working on a WotLD comic, but my artistic skills have atrophied over the years, so that will probably take quite some time to appear. We both have day jobs, of course.

5.Could you describe the World of the Living Dead?

I like to describe it as a survival strategy zombie sandbox MMO. Players control groups of survivors using a heavily-modified Google Maps interface. The concept is that the players are members of the fictitious National Emergency Control & Relief Agency (NECRA) who have been sealed into secure locations. They have been tasked with remotely assisting survivors via an emergency system set up when the authorities realised that centralised control and evacuation methods were futile. The government and NECRA seem to have disappeared, but these operatives have their mission, which is to ensure the survival of their own “cell” at all costs. Simulations showed that large groups would always lead to infection, so competitive survival was seen by NECRA officials as the only hope for humanity. The game is primarily about scavenging for supplies and avoiding contact with other groups of survivors or, alternatively, about finding other groups and stealing their supplies. Characters are managed by placing them in squads. The live position of any plays in the area around your squad is updated real-time – so the game is effectively a browser-based RTS, but with no Flash required.

I’ve been fascinated by the genre for a long time. Not because of the gore and horror, but the constant pressure on survivors to gather supplies and find safety. It’s about the apocalypse, really, so zombies are really only one aspect of it. I recently rewatched a UK series created by the often brilliant Terry Nation in the 1970s called Survivors which I remembered enjoying in the ’80s when I saw it (it was also remade recently). A virus killed over 90% of the population of the world, and the remnants of humanity are left to try and rebuild society. I find that premise fascinating, especially when rival groups form based on such basic needs as seed for planting, or a safe water supply. When zombies are involved, there’s also the tension which comes from how easy it is to be turned into the enemy, to be infected and lose control or to be killed and then “come back”. I think that fear taps into something deep inside us, a sense of how random death can sometimes be. Most of the good zombie/infected films get that fear exactly right. Other influences were Threads, a particularly harrowing UK docudrama about how a nuclear holocaust eventually leads to the collapse of society, or any number of the apocalyptic stories which seemed to be everywhere at the end of the last millenium.

In the zombie genre, the magnificent comic The Walking Dead deals with exactly these difficulties. The zombies just happen to be there in the background and only leading to deaths when the characters are tired or distracted, whereas it’s the other survivors that you really have to worry about. I’m really looking forward to the TV version of this, which starts at the end of the month in the US. And of course there’s World War Z and the Zombie Survival Guide, both of which I had great pleasure in rereading repeatedly throughout the design process. 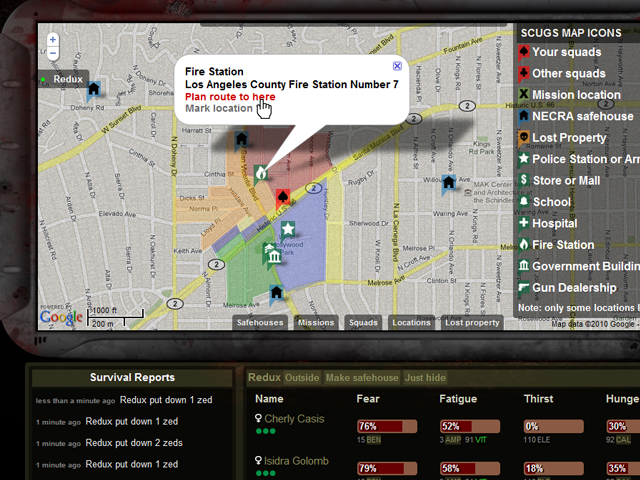 7.What would you say are its most innovative and/or unique mechanics?

I wanted the zombies to be a faceless horde, so decided that they would be represented by z-density, rather than as individual enemies. Z-density is basically a shorthand used by NECRA to determine how dense the zeds are on the ground, based on satellite tracking of their movement. We take real city blocks and work out how many actual zombies are in the block (there are over 9 million zombies moving around the LA County area we’re using for beta testing – they react to player activity, including the use of firearms, over time). Based on the size of the block, we calculate the z-density as a percentage. The players have to imagine this, as z-d is represented by colours, but we might introduce more graphics once we’re happy that all the mechanics are working correctly. Combat is effectively automated, with survivors using firearms or weapons if they have the skills to wield them. Every route completed can result in them putting down some zeds, or in injury and even death for the characters.

The need to consume enough food and liquids each day is something I wanted to have, although I know that it’s a risky prospect for games. Characters need a certain amount of calories and volume of liquids or they will start to accumulate thirst and hunger. Once these reach maximum, the character will die the following day. It takes about four days for dehydration to result in death, and 28 days for hunger to prove fatal. Even if players find supplies, they can’t just feed and water their characters back to full strength. If you neglect them for a few days, it will take a few days for them to recover, as they can only eat and drink so much each day. We decided to make consumption automatic, to avoid forcing players to feel that they had to continually tend to the characters, but it can be tough to keep a large group supplied with enough liquids. Locations do not replenish once they’ve been exhausted, so that means that players have to stockpile when they can, or work out a way to barter for their needs. 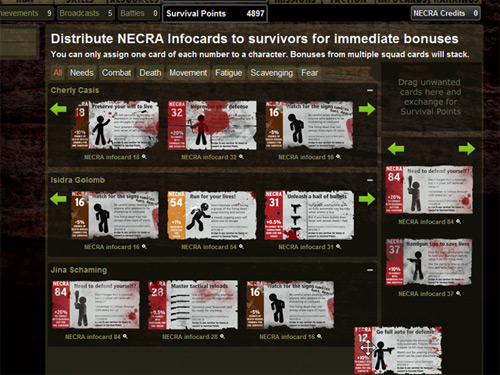 8.How long have you been developing it?

9.When will it reach the MMO masses?

I sometimes feel that we’re on Valve Time, so I’ll just say that we hope to be out of beta by the end of this year or the beginning of 2011. We are determined to go into open beta over the course of the next two months.

10.Any plans for the future?

Any other concepts for games have had to be consigned to my notebook while we’ve been developing WotLD. I hope to start working on at least one of those once WotLD is running smoothly, although we don’t really plan on stopping development on the game. The list of features we have planned for WotLD is extensive, and we hope to be able to grow and develop the game so that it becomes a huge multiplayer simulation of the zombocalypse. Vehicles will be making an appearance in the relatively near future, as will a deluge of content once we go into open beta, including hundreds of items and weapons. The graphics side of the game has been limited to what I can create myself, so I’m also hoping to be able to focus more energy on that as the balancing and tweaking settle down. The period of rebuilding civilization after an apocalypse provides plenty of scope for developing the game in some interesting ways.