It’s Wrestlemania time, and I thought I’d tackle the first licensed wrestling game that I remember playing, WWF Superstars, by Technos in 1989. Overall, this is one of favorite all-time grapplers, but it also has a couple of flaws that I normally would choose to overlook.

There are 6 total wrestlers that are playable, each with their own mannerisms and finishing moves; Hulk Hogan, Macho Man Savage, Big Boss Man, Honky Tonk Man, Ultimate Warrior, and Hacksaw Jim Duggan. You’ll see Hulk with the Leg Drop and posing to the crowd; Macho with the Big Elbow and a brutal clothesline; the Shake, Rattle, and Roll; and etc…..

The character sprites, as well as the audience, are big, bright, detailed, and colorful, and capped off with a huge ring to play in. The pumped-in sound is constant, and does give you that feel that you’re performing for a sold-out crowd. 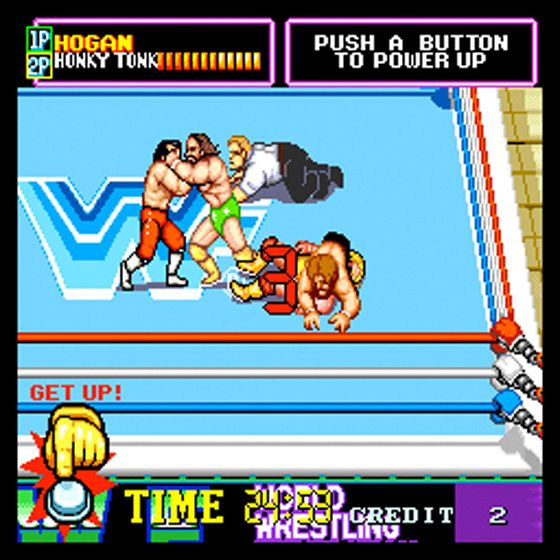 The play itself is a joystick and just 2 buttons, one for a close grapple and the other for attack. After a grapple, you can toss your opponent into the ropes (which bounce nicely) for a kick to the face or an up and over move. Each player will have similar offensive moves such as a hit/slap or kick, but there are variants such as the finishers. There are also typical wresting moves like suplexes, piledrivers, etc…, but there are also special perks like going off any top turnbuckle, or tossing a man over the top rope for 20 seconds of unrefereed mayhem with tables and chairs. Just about everything you would have seen during the super 80′s wrestling explosion, you’ll see here. 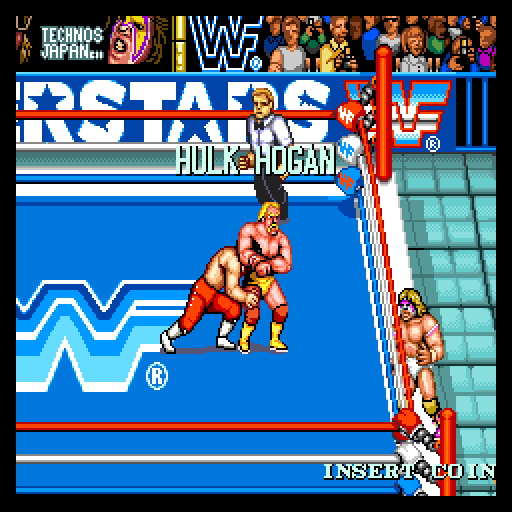 The game itself is strictly a tag-team tournament, so no solo character play here. But, as your life/exhaustion meter dwindles, you can tag in your second character to help. It’s also a 2-player game, so your buddy can be your partner or your opponents. You’ll fight through just 3 matches made up from the other 4 wrestlers before you reach the tag-team champions in Ted DiBiase and Andre the Giant (neither playable characters). After you beat them you’ll be crown champs, but have to play a couple of more matches the retain the title to be considered game-beaters.

Mostly, I loved the game, but here are the flaws that I alluded to before: Firstly, there are only 6 playable characters. Great ones, yes… but I would kill to be Andre and press Hogan….I was denied. Secondly, there is an easy trick around the life meter: As long as you have plenty of quarters plugged into the game (or credits through MAME) you can hit the start button and refill. So, if you’re getting hammered you can do your own version of “Hulking out” and retain full life. The game is pretty easy if you use this “cheat”.

But overall, it’s a crapload of fun, and I try to enjoy almost any smack-talking game. This made for a fun arcade time back in the day. Highly recommend it.