Tweeting back and forth with TheSocialGamer about the TurboGrafx-16 led to some serious retro T16 game-groovin’ on my handheld TurboExpress, replaying some Blazing Lazers, Dragon Spirit, and Bonk’s Revenge before calling it a night. 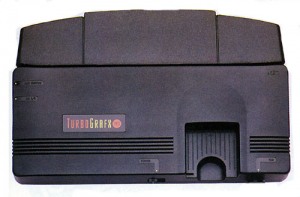 For those that have NO idea what I’m talking about, the TurboGrafx-16 was a video game system sold in North America by NEC (it hit the shelves in 1989).  It was known as the PC Engine in Japan, where it debuted 2 years earlier (those damn Japanese got all the new game tech!).  This was a killer system in its day: 16-bit graphics capable of 482 colors at once.  It suffered a pretty big drawback, though, with initially only 8K of memory available for the games to work under.  (As a comparison, the Super Nintendo had 128K.)

It came packaged with one game (Keith Courage in Alpha Zones) and one controller (called a TurboPad).  Some awesome games were available for this system, like Blazing Lazers, Neutropia, Order of the Griffon, Bomberman, Bonk’s Adventure, Alien Crush (and its sequel, Devil’s Crush), Cadash, Klax, and Military Madness, just to name a few.  You could hook up an accessory called a TurboTap which would allow you and 4 of your gamer buddies to play certain games (like Bomberman) for serious multiplayer fun.  Oddly enough, there was only ONE controller port on the system. 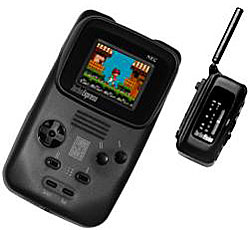 What made the TurboGrafx unique was how they promoted their handheld game system.  Most competitors used separate games for the console systems versus the handheld systems (like the NES and the GameBoy).  If you wanted to play Tetris on the NES and GameBoy, you had to buy one NES version and one GameBoy version.  But the TurboExpress (the handheld version of the TurboGrafx-16) used the very same games that it’s parent console used!  The games – called HuCards – fit in either system and played the same.  The TurboExpress even played in FULL COLOR!  Wow, back in the day that was an AWESOME gaming experience. 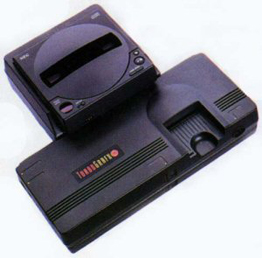 This is the TurboGrafx-16 with the TurboCD attachment.

Another nifty accessory you could get for the TurboGrafx was the TurboCD, which allowed you to play the really great CD games that were out there, as well as play music CDs.  It came with a HuCard called a System Card which you put into your TurboGrafx to boost the RAM so the CDs could play (64K).  Another memory card, the Super System Card, gave you an additional 192K, which gave access to the Super CD games.  You haven’t played a 16-bit system until you’ve played Lords of Thunder.

So why didn’t NEC rule the 90′s instead of Sega and Nintendo?  There are plenty of reasons that come to mind, such as the aforementioned 8K memory limit and an intially high price on the accessories that made it a gaming system juggernaut (the TurboCD and TurboExpress).  The real T16 killer was that the system was not embraced by 3rd Party developers.  Companies today should look at the history of the TurboGrafx-16 to see what happens when all your innovation and development comes inhouse.  Had NEC been able to bring more developers on board right away, the system would have had a massive library of games and accessories, which everyone knows is the gamer geek’s kryptonite.  Who knows how console game systems would look like today if NEC’s TurboGrafx had dominated the market? Perhaps Sony wouldn’t have been able to get a toehold because the TurboDuo drowned out their sales?  Maybe Nintendo would have skipped past cartridge-based systems right into a disc-based system like the GameCube right away?