After revitalising the fighting game genre with Street Fighter 2, the mid-90’s saw a huge influx of titles. The 16-bit consoles got a lot of good (and not so good) ones and this continued with the 32-bit systems with the added bonus of some fancy new 3D ones too. Many franchises popular today were born during this period, with the Saturn as well as the PlayStation getting some top titles. Given the unfortunate lack of success for the Saturn outside its native territory, many of its best games never left Japan including a lot of fighting games. Consequently there’s still a lot I haven’t played, but of the ones I have played, these are my favourites:

Games-Related Top Fives Disclaimer: I’ve traditionally stuck to the games I know and love so far, and these game-related top fives reflect that. One of the purposes of this blog is diversify my gaming experiences, to play games I haven’t played before, so I will do new game-related top fives in a few years to see how different they are!

This third (and so far, final) entry in the Darkstalkers series from the awesome Capcom was only released in Japan so I wasn’t really able to play it until I finally got my lovely Skeleton Saturn. My copy of the game unfortunately came without any instructions too, so I had to try and work out most of the moves myself, but it was worth the effort! This highly creative series never really seems to get the plaudits that Capcom’s other franchises do which is strange as its horror/monster themed character roster gives it huge potential which is largely realised with some outrageous combatants and special moves. The graphics and music are also of the usual Capcom high quality and there’s really no bad points to be found here. Another one please, Capcom!

Capcom and SNK were both great supporters of the Saturn but it was releases by the former that dominated mine. X-Men Children of the Atom was good but the game suffered somewhat during the PAL conversion process, as was often the case. Marvel Super Heroes, however, was also a fantastic game but also received a top-notch port too. Despite featuring some typically flawless play-mechanics, let’s face it – there’s one reason why this game has such appeal and that’s the opportunity to smack people up as Spider-Man, Hulk, Iron Man, Magneto, and all the rest! It’s a pretty short game, and pretty easy for Capcom standards, but the graphics and music are awesome and the moves given to these famous characters are supremely satisfying to execute.

Not many people seem to know about this one for some reason which is a bit odd considering it kicks arse! Converted from the arcade game of the previous year, Last Bronx is a weapon-based fighting game set in a alternate Tokyo run by vicious street gangs. There are eight selectable characters battling for supremacy as well as a final boss, and each uses his or her own weapon. Graphically this is among the Saturn’s best – it runs in high-res mode and with 60fps and the backgrounds are in full 3D. There’s even motion-blur on the weapon attacks! Yes, you could say it’s Virtua Fighter 2 with weapons but I much prefer this to the more well known game. Featuring a nice selection of characters, some superb moves, and a decent challenge, this violent brawler is well worth your time. 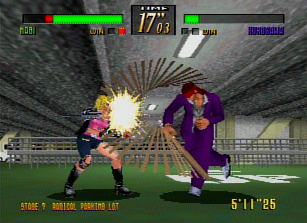 Virtua Fighter 2 or Fighting Vipers. Which do you prefer? For me it’s the latter, hands down. To be honest, I just can’t be arsed to spend months learning all the intricacies of the characters in VF2. Vipers is far more accessible for me with its amour-cracking, wall-smashing mayhem. Then again, Sega, if you’re going to give me both in the same game I certainly won’t complain! Celebrated upon its release as a possible saviour for the Saturn and still sited as one of its ‘killer apps’, Megamix truly was a treat for Sega’s loyal and long-suffering fans. It featured, what was at the time, a staggering array of characters, play modes, and secrets and remains without question one of the system’s most entertaining titles.

Sorry, maybe it’s predictable and not terribly daring but the simple fact is, I’ve played this more than all the previous four games combined! I just love the Street Fighter ‘universe’ with all the distinctive characters and their back-stories and this is one of my favourites. The graphics are top-notch too with superbly drawn sprites and backgrounds and the energetic soundtrack really adds to the atmosphere. As is usually the case, I’m not sufficiently skilled to make the most of the highly intricate gameplay that is typical of the series but that doesn’t stop me from getting a lot of enjoyment from repeatedly playing through the game as Ryu, or even being daring and trying another character! A near-flawless fighting game, and probably my second favourite ever! 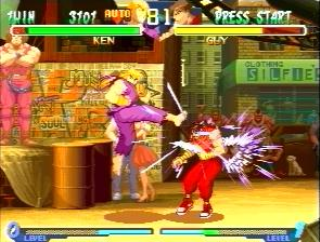 Special Note: Apologies for the quality of the screenshots here, I haven’t yet worked out how to grab my own for Saturn games so I’ve had to rely on alternative techniques! P.S. if you’re one of the ones I borrowed a screen shot from, thanks for not being one of dicks who tags theirs!

How Video Games Changed My Life