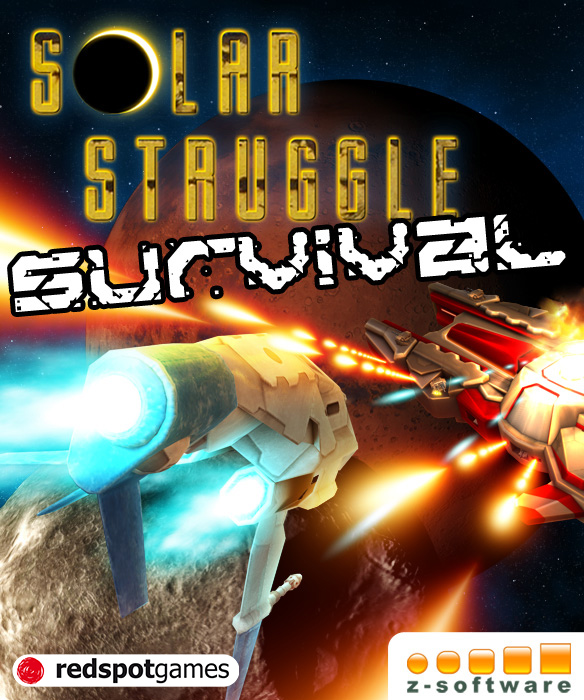 At one time or another, all of us have come across a space shooter that we just loved. For classic gamers it can be mega hits like Space Invaders or Galaga. For some more modern gamers maybe it was one of the Star Wars games or something from the Decent series. The space shooter is a staple of video game play and the legacy of great space shooting games continues with the Solar Struggle series.

Solar Struggle: Survival was recently released on the Xbox live platform and Obsolete Gamer had a chance to sit down with Andreas Heldt, CEO of Z-Software to talk Solar Struggle and gaming.

Can you start off by giving us an overview about the game Solar Struggle?

Andreas Heldt: The Solar Struggle world is settled in the 2169th year where the world population is divided into three fractions: The military, who maintain stability, the Consortium, a big commercial power, and the Outlaws, who fight against the suppression of the Consortium. The main character in the original Solar Struggle game joins the Military to serve a higher purpose but over time he discovers that the Military’s point of view doesn’t coincide with his own ideas.

How did you come to want to create a game of this type?

Andreas Heldt: We’ve always been attached to space-themed video games. As we saw the “Solar Struggle” project, which was maintained by one man, we almost instantly decided that we had to support the game! Ever since did we extended the game and also introduced the “Skirmish” mode, which is the main element of the new “Solar Struggle: Survival”. We just weren’t happy with the original implementation of the skirmish mode and felt that the players wanted a more arcade-style game.

With many space based games 3D is the normal, but you decided to mix a 3D environment with a 2D plane, can you explain the thought process behind that decision?

Andreas Heldt: Navigation in full 3D space is pretty complicated and you can quickly get irritated. The complex movement controls also weren’t suited for a pretty fast paced, arcade-style game. All these problems are solved by the 2D approach that we chose for Solar Struggle.

Can you tell us about the development process behind the game?

Andreas Heldt: The game has been developed by a single programmer for a long time. We found the project at the games convention 2008 in Leipzig and decided to support the one-man project to get it done faster and improve the asset quality. In the last months before the release we increased the number of people working on the title so we could add a lot of polish in a short amount of time.

What is it like creating a game for the Indie Games section of Xbox live?

Andreas Heldt: Creating games for XBLIG is a real comfortable process. The tools from Microsoft allow us to make quick iterations and maintain a fast development pace. Sadly, if you’re developing for the Xbox, you won’t get access to all of the features which the “big games” have, like leaderboards or achievements.

All the reviews we have read praise you for such a polished game, what steps did you take to insure the game would be the best it could be?

Andreas Heldt: The whole game balancing has undergone a meticulous testing process. This makes the game challenging as well as keeps the frustration to a minimum. Furthermore, for “Solar Struggle: Survival”, we put in a lot of effort to convey the mood of the game. We switched from the vibrant graphic style of the original Solar Struggle game to a more stylized look.

While the game might be considered a space shooter there is a very good storyline associated with the game can you tell us about how you created the story and implemented it into the game?

Andreas Heldt: The story has been thought out with the goal of giving the player the opportunity to play as part of each of the three different fractions. A linear story mode was chosen to carry the story better with surprising moments. On the game side, all missions were laid out with a level editor and scripted with C#.

One of the few criticisms was that the time limit mixed with the wave of enemies made it difficult to focus on the mission, was this your intent with the design?

Andreas Heldt: It was intended, the goal was to keep the action going. The player should immerse himself in the tense battles.

Tell us about the award system and the way you got around the center server system?

Andreas Heldt: Unfortunately, you don’t get access to Leaderboards or Achievements when developing an Xbox Live Indie Game. But we wanted to incorporate “Achievements” into the game so we searched for a way to circumvent the lacking abilities of the XNA framework. We came up with a solution where the player is served with a unique award code which resembles all the awards he has been unlocked while playing.

The award key is then entered into our awards center website (http://awards.solarstruggle.com/), where you can compare your progress with other gamers. Unfortunately, the system has not been used very often. Possible reasons are that most Xbox gamers won’t copy a code from the TV and enter it on a PC in a website and that the code is pretty long and you have to remember a lot of characters.

Can you tell us a little about the gaming background of the team?

Andreas Heldt: Most of the developers who worked on the title are passionate gamers themselves – also everyone has their own favorite game genre.

Were there any games that inspired the creation of Solar Struggle?

What was your favorite classic space shooter?

What’s next for the team?

Andreas Heldt: We’re currently working on a yet unannounced game which will be released for the PC only (sorry guys), but there are still plans to expand the Solar Struggle universe in a later project.

Rift Q and A

World of Warcraft: Ask a CDev