The story I am about to tell you is a true one. It happened to me in the early 1980s, long before anyone talked about Reptilians in public, at least what I know of. This is the first time I publish my own experience with something people would probably call a super-natural being. I have intended to tell this story a long time, but something has told me to wait. I now feel it is time.

I can’t remember the exact year this happened, but I know it was sometime in the early ’80s, probably close to 1982.� In this period of my life I was partying quite a bit, and drank more alcohol than was good for me. I mention this, because it could have triggered what happened to me. For the record I have to say I was absolutely sober at the moment of the incident, and hadn’t been drinking within the last few days. The reason I know this is because I remember I was rehearsing with my rock band pretty intensively, preparing for a gig in the next coming week or so.

This particular night I was laying in bed, trying to go to sleep. After a while, I floated into the stage between being awake and being asleep, where you are still aware of your environment, but slowly entering “dreamland”. Suddenly I felt how the room was getting icy cold and my hair stood right up on my neck. I remember opening my eyes, and I was clearly awake in an instance. The room got even colder and I noticed I was totally paralyzed and couldn’t move one single muscle in my body. I had a very eerie feeling in my stomach.

Then, out of nowhere, a horrible creature appeared in the opposite part of the room, close to the bedroom door (I was living alone in an apartment at the time). In retrospective, I can see that the creature looked something like how people would describe the Reptilian race. When this happened, I had no other way of describing it than as a demon. I have no recall that the reptilian-like being was taller than a human, but he was extremely muscular. He was naked, his skin was green and his eyes were ruby red and glowing. The sense of evil in the room was beyond comprehension. 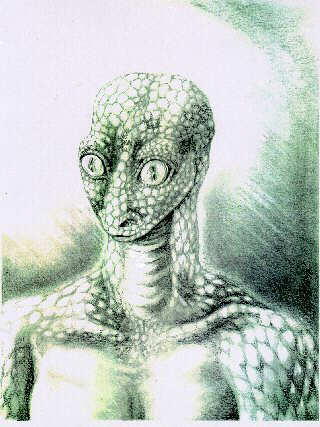 I yet have to find a picture which shows how the creature looked like. This one is somewhat similar, but his eyes were red and his body structure was wider and even more muscular. The guy on this picture looks friendly in comparison. If I find a better picture, I will exchange them.

This creature was staring at me for I don’t know how long, but it feels like it was maybe half a minute, while I still couldn’t move or scream. He suddenly started growling and before I knew it he was over me in my bed, furiously roaring. His big, ice-cold hands grabbed my neck, trying to strangle me. He was extremely heavy, and one of his knees put an enormous weight on my chest. I recall I could feel his breath in my face, but can’t remember how it smelled, probably because I was choking. I was thinking, my God, this is it. I am dead! I couldn’t breathe at all, due to him strangling me. And all the time he was roaring loudly and furiously. I remember my next thought was: “what’s gonna happen now? Where will this creature take me?” I was horrified, but couldn’t do anything. Even if I wouldn’t have been paralyzed, there was nothing I could do; this creature was much too strong. His strength was probably at least ten times the strongest man on Earth.

I could feel my life energy fading rapidly, and I knew it was just a matter of seconds before I was going to pass out. I prepared myself mentally to die. Then, in a blink of an eye, I heard a long “sweeping sound” (this is the only way I can describe it) and the creature disappeared in thin air. I was not paralyzed anymore and I sat up in my bed, desperately catching my breath, coughing and choking. My heart was pounding like a hammer in my chest, and I could still feel the tightness around my neck and the pressure on my chest from his knee. The room was still ice-cold, but slowly went back to normal room temperature. I can’t remember if I went back to sleep that night or not. The rest of the night is a blur.

I have never experienced anything like this after that, and I have no idea what it was; I can only speculate. The creature was definitely reptilian in shape, but also looked like a demon to me at the same time. Was this a creature from another dimension, or a classic demon? Or are these two basically the same thing? I don’t know, I only know this was the creepiest experience in my life, and even now, when I think about it, it gives me goose bumps. By drinking and partying, could I have been sensitive to pulling in those lower dimensions in my life, or is it unrelated? Who knows? I was not into the occult at that moment, either; that happened a few years after. Did my experience have anything to do with joining a secret society in 1985? Also, why didn’t he kill me? Why did he disappear just before I died? Was I “protected” somehow, which prevented him from taking me away, or was he feeding off from the fear I felt at the moment and sucked me out? Many questions. If the latter is the truth, I haven’t felt any negative changes in my life energy, or anything else that I can relate to this incident. I can’t see that it affected me negatively later in life, except that it was a horrifying experience. I may have a “blind spot” in this area, though; I can’t tell…

I told my friends about this the day after it happened. They knew me well enough to understand I was not lying, but of course they had no idea what had happened to me, either. Some may think I was dreaming the whole thing, but believe me, I was awake and fully aware of what was happening. This was not a dream.

If someone has had a similar experience, feel free to contact me at stupid@obscureinternet.com.

Juan of the Dead

The Theory of Time.