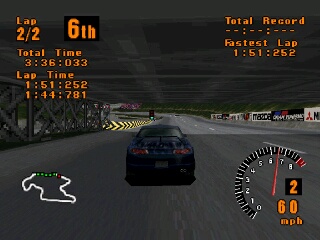 There’s been a few landmark driving games over the years but I can’t remember any that had the impact that Gran Turismo had. Much of the adulation it received initially was earned by the near photo-realistic quality of its action replays, although this always confused me – sure they look good, but it’s the game that counts, isn’t it? Luckily, this aspect of the game was also ground-breaking in many ways. Featuring masses of real cars, numerous testing circuit-based courses, extensive car customisation options, and lots and lots of competitions, this was a driving game fan’s dream come true, and is still the series others aspire to. Many prefer one of the various sequels but this original is the one I always return to, mainly because I’ve never been too good at ‘simulation’ driving games but this game lets you keep boosting the power of your car until you’re more powerful than your rivals (the sequels brought in BHP limits for races)! My trusty Honda Prelude destroys all! 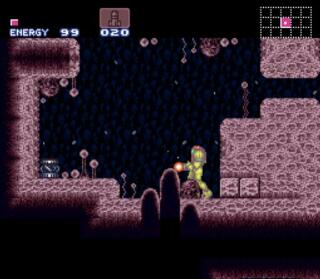 I can still remember buying this game second-hand in my local game/music store. I had little knowledge of it and, thanks to my prior Sega allegiance, I had never played the earlier Metroid games, but I had heard that it was supposedly something special. I really didn’t know what to expect so, upon playing it for the first time, proceeded with caution. What followed was one of greatest awakenings of my gaming life! I was initially wondering what was going on (no one reads instruction books unless they get stuck!) but was quickly immersed in the atmospheric, haunting world of Brinstar and all the other amazingly designed areas of Super Metroid’s world. Not many games have hooked me like this one did – I spent hours, days, weeks trying to uncover all the secrets and explore every square inch of its fascinating game world. In fact, given my love of this game, it’s nothing short of insane that I have yet to get around to playing the subsequent Metroid games!

Due to my lack of interest in modern gaming and PC gaming generally, there’s very few first-person shooters I’ve actually played – something which perhaps needs to be rectified – but this is one of the few exceptions, and a damn fine one it is too. Its set in and around Egypt which gives it the potential for a great story and lots of secret passages and traps, not to mention a fantastic atmosphere! It strikes the perfect balance between puzzles, exploration, and shooting and features a huge game world to play through, with new parts of older levels being continually opened up after the acquisition of new items and abilities. A superbly programmed game by the now sadly defunct Lobotomy Software which did things on the Saturn that supposedly weren’t possible. 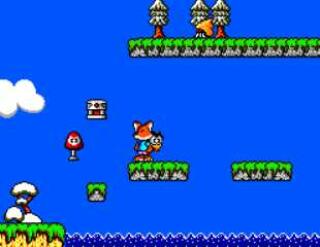 My affection for the Master System has been well documented in these pages and this is one of my very favourite games for it. Sure, in mere screenshots it probably just looks like every other 8/16-bit platformer going – grass, desert, ice stages, formulaic characters, cute graphics, etc, but take the time to play it and you’ll find that it’s a lot more than that. Featuring four playable characters with unique abilities that you can switch between using ‘transformation sticks’, large stages with multiple routes, a perfectly-graded difficulty level, and lots of secrets, there’s plenty here to keep any fan of platformers happy for a good while. It is also home to several features that I hadn’t seen before, but which would later become commonplace in the genre, so for it’s time it was pretty original too. On top of all that, it has springy poles that can fling you halfway across the stage! Great fun and addictive as hell!

To my shame this remains the only Zelda I’ve played properly (yes, I know!) – as much as I have enjoyed the few RPG’s I’ve played, I guess my attention span isn’t up to it! However, this game was one of the few I’ve actually bought full price on the day of release and it was worth every penny. Like Super Metroid, Link’s first 3D adventure draws you into its world completely and hours pass by without you noticing. Featuring lots of large areas and dungeons, many of which reveal new secrets every time you return to them, countless side-quests, dozens of characters to interact with, and a whole host of items and equipment to collect, some new, some old, this is about as immersive as videogames get for me. Now, I must get around to playing A Link To The Past!

Some movie studios to skip Comic-Con

If you were stuck in a waiting room for hours and had to choose one game to play which one would it be?

The beauty of their dreams