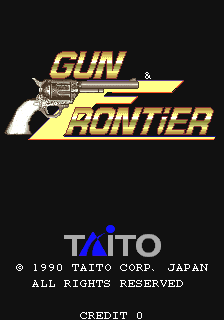 As most of us already know, shmups are one of the most common types of games around, or at least they were in the ‘good old days’! A majority of them featured basic stories merely to facilitate the action which usually revolved around some sort of evil dictator/alien invading a country or planet or something, perhaps kidnapping someone important in the process. So leave it to Taito to come up with a shmup story as off-kilter as this one! It’s set in the year 2120 when Mankind has escaped the confines of Earth and started colonising other planets. One of them, Gloria, is rich in gold, but it cost most settlers everything they had to reach it, so the planet has ended up with a civilisation somewhat akin to the American Wild West! Thanks to the abundance of gold though, Gloria provided a comfortable home to its inhabitants.

Unfortunately, its gold also soon became a target for the ‘space thieves’ known as the Wild Lizards who invaded and quickly overwhelmed the comparatively primitive dwellers. Among them, however, was a few talented inventors and engineers were able to design and build two fighter planes in the shape of revolvers with wings (no, I’m not making this up). Much of this is revealed in the game’s pre-title screen intro sequence which includes some digitised stills of locals being traumatised. “Ah! Can anyone save us from this hell…” Yes, a chortlesome story it may be, but it does its job, perhaps overly elaborately, or giving you an excuse to shoot the crap out of the evil aliens, and this is done over six vertically-scrolling stages featuring some of the more intense blasting action yet offered by Taito! 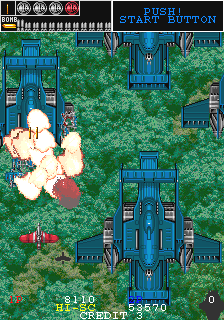 As might be evident from some of the screenshots, Gun Frontier looks and plays a lot like some other well-known vertical scrollers, notably Flying Shark. It features the same sort of tanks, squadrons of enemy fighters, and ground targets such as gun turrets and buildings, and even some of the backdrops are reminiscent. Not that this makes it a bad game, of course, just not very original. Maybe that’s what the Wild West theme is in aid of. Hmm, anyway. It seems the internal working of your aircraft doesn’t adhere to its antiquated design. If it did, you’d only be able to fire six shots before needing to reload! As is it, the rapid-fire, albeit weedy, ammunition is infinite. It initially consists of a twin shot which can be upgraded by collecting the silver ‘dimes’ that some destroyed enemies leave behind. 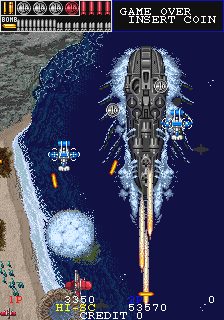 Each time you collect five of these dimes your cannon’s power will be increased by one shot, ultimately enabling it to fire five shots at once. Your weird ship is also equipped with smart bombs whose power can be increased by collecting the gold bars left in the ruins of destroyed ground targets. Appearing less frequently is a spinning silver/gold dime. Collecting it when its silver side is showing will do the same as any other silver dime, but if you collect it with its gold side showing, it will instantly boost your shot and bomb power to maximum! Unfortunately, that’s about it as far as the power-ups are concerned, and you’ll need all the firepower you can get. The enemy attacks are relentless here with plenty of large tanks and battleships around to keep you occupied while the waves of smaller craft try to pick you off! 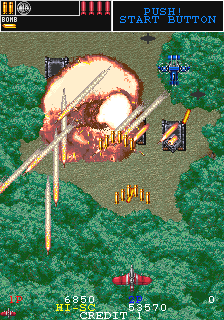 Whilst plentiful, the design of the enemy craft are a bit hit and miss. Some of them are similar to many other shmups, as mentioned earlier, but for some odd reason many others seem to be based on old Wild West-era weapons that you (and potentially a friend, for two players can fight the Lizards together) control, which is a bit odd. It has been explained why the planet you’re fighting to save has a Wild West theme, but why would advanced aliens make their ships look the part too? Well, regardless of the motivations of the aliens, it’s an interesting look but I’m not sure I like it much personally. The sprites are all pretty good from a technical point of view though, and the screen is always busy with bullets, explosions, rockets, etc, and some enemy aircraft are even armed with flame-throwers!

The backdrops are generally pretty good with some nice details, such as a flock of birds flying away as a large underwater enemy starts to stir, but the choice of colours seems a bit dull and washed out for the most part. There’s a couple of nice graphical effects on show (such as the big blue ships in the screenshot above which change size as they change altitude), but nothing is really done with the strangely chosen Wild West theme beyond the aesthetic design of some sprites. In fact, the graphics, as well as the sound, and indeed everything about Gun Frontier really, is generally little more than average. It doesn’t do anything wrong and is perfectly playable, but at the same time there’s nothing here that hasn’t been seen goodness knows how many times before either. Give this a go if you get the chance by all means, but don’t expect to be blown away by it either.