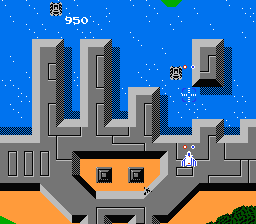 Format- Gameboy Advance (but several others as well)

I don’t think Xevious can join that group though. There aren’t many people that seem to hold this game with much affection, and as a result the game is mostly forgotten.

‘Mostly’ as it has been re-released a fair bit in recent years, giving the current generation of gamers the (mis) fortune to play it again.

Suffice to say, it doesn’t hold up well nowadays. Enemy design varies from the bland to the mildly acceptable, and when both ground and air based foes are on screen frustration reigns.

Movement vertically is sluggish, like the ship is constantly have to force through an invisible blancmange. Coupled with bullets that are much faster than your ship makes the game unfairly difficult. I’m always up for a challenge, but only when the game plays fair.

The graphics have no retro wow factor either – patches of grass look like they were sketched by a five-year old in a more restrictive version of Mario Paint – it makes you wish for a simple but effective black space background.

I’ve not managed to get very far in the game (the screenshot above is of a level that I will probably never get the chance to play through) but I still think most of these criticisms still stand.

So don’t bother with Xevious. Just let it quietly pass away, and hopefully the game’s developers will do the same.

What does ‘Xevious’ actually mean anyway?

Note – I have a quite cool toy from Japan that is based on Xevious. It makes a sound from the game, and is sadly much cooler than the game itself.

Second note – This review was admittedly a play through of the GBA port of the NES game, which is respectively a port of the apparently superior arcade version. So this revisit shouldn’t be seen as a retrospective of the whole Xevious pantheon, just the poor NES version.