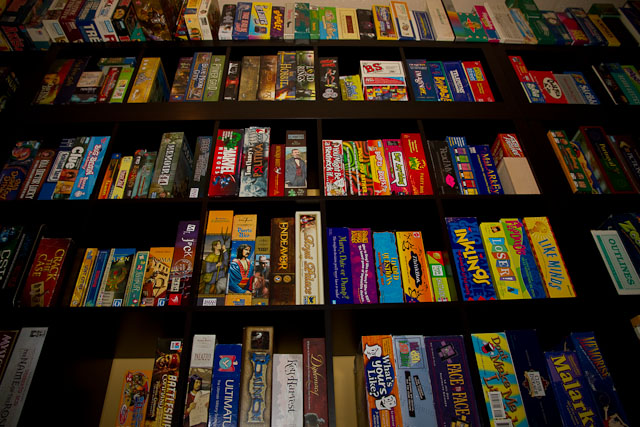 The other day I sat and looked at my tabletop collection to see how many of them were Ameri-trash and how many were Euro games and it turns out that I have more of the latter.  Now, some of you may be asking what is the difference between them?  Well, as some of you might remember, in my last article I went on to talk about how there are games that are all about how the game plays (game mechanics) but they don’t have too strong of a theme.  These types of games are called “Euro games” and European developers, mainly Germany, make them reason for which they are sometimes called “German-style board game”.  Some of the games that belong to this category are Power grid, Castles of Burgundy, Agricola, Alhambra and Ticket to Ride.

Power grid is an example of a great Euro game that has won several European game awards and even though it was originally published in 2004 it still sells really well and has had many expansions as well as games developed in the genre.  When you look at power grid the theme itself is nothing crazy, you’re an owner of a power company that needs to buy power plants, buy resources to power those plants as well as build said plants in cities across the U.S. or Europe.  When you look at the game it looks bland and you would think that you would not have a good time playing it.  How wrong you would be once you actually play the game. The mechanics are superb, the global economy that the game creates is amazing and after you are done playing it you want to reset the board and play again.  That is what makes a game a great game in my opinion. 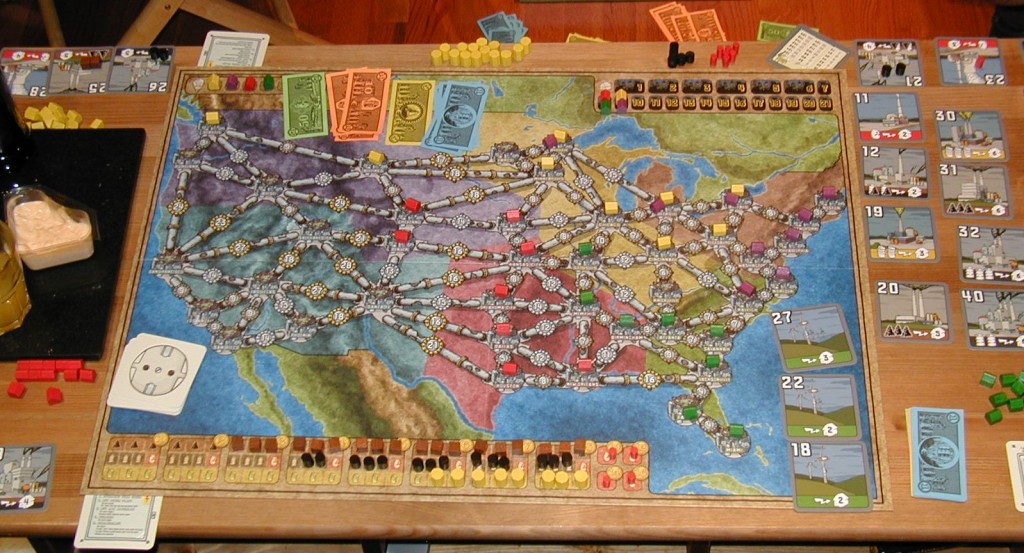 Now to go and describe Ameri-trash games they are usually games that have an outstanding theme to them but their game mechanics fall a bit behind their euro brethren, not to mention that they involve more of luck instead of strategy. Some of the games that fall in this category are:  Arkham Horror, Stracraft: the board game, Clue, Monopoly and Super Dungeon Explore. 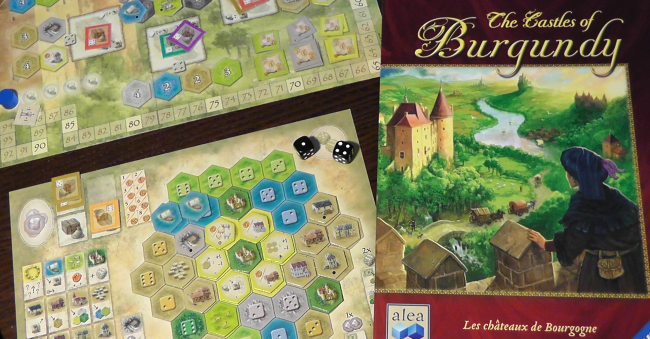 One of the best Ameri-trash games I have ever played is called Arkham horror.  This is a phenomenally themed tabletop game set in the Cthulu mythos.  The game does an excellent job in making you feel like you are a paranormal investigator in the roaring 1920’s trying to stop this great evil from destroying the earth.  When you sit down and look at this marvelous game set up on a dining room table you are intimidated into thinking this game is way too complicated for me to play.  When you look through the rulebook it makes the game seem like it is more complex than it actually is.  Trust me!! I read through the book multiple times before looking up a video online on how to play the game.  Once I saw how easy it actually was to play I sat down and gave it a whirl.  Let me tell you the game blew my mind away with how awesome the theme was but when you actually looked at how the game played, especially when compared to a euro game, it didn’t quite stack up to it.  Now I’m not saying that people should not try out Ameri-trash games but if I really had a choice between the two I would definitely pick up a Euro game before I grab an Ameri-trash game. 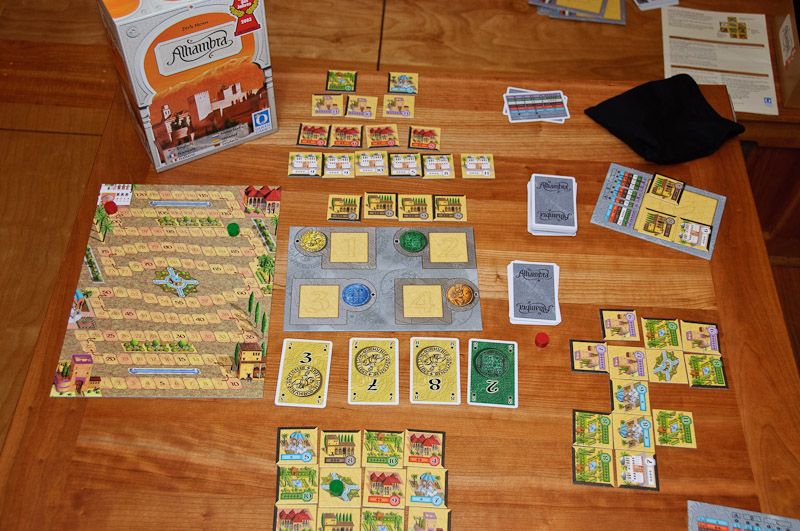 When you look at both these game types it goes without saying that some people when they look for their games they want to get a great experience out of it.  Heck for me as long as I have fun by the end of the game I will try anything.  Now, there are people out there wishing that there is a game that takes the best of both worlds and puts them together.  Well I’m here to tell you that there was once such game.  The game in question is called Twilight Imperium.  It was a game that when it was developed they took the great game mechanics from a euro game and paired it up with the great theme of an Ameri-trash game.  The result was a huge success that sold extremely well and still to this day has had expansions come out for it.  The only thing that I have heard from people who have played it complain about is the fact that you need like eight hours to actually play an entire game of it.  For me that is way too much time to sink in one sitting and, I would love to give that game a try in small chunks.  The only problem I would have is where I could leave the game sitting because I have two cats who would love to jump up on the table and play with the new cat toys. 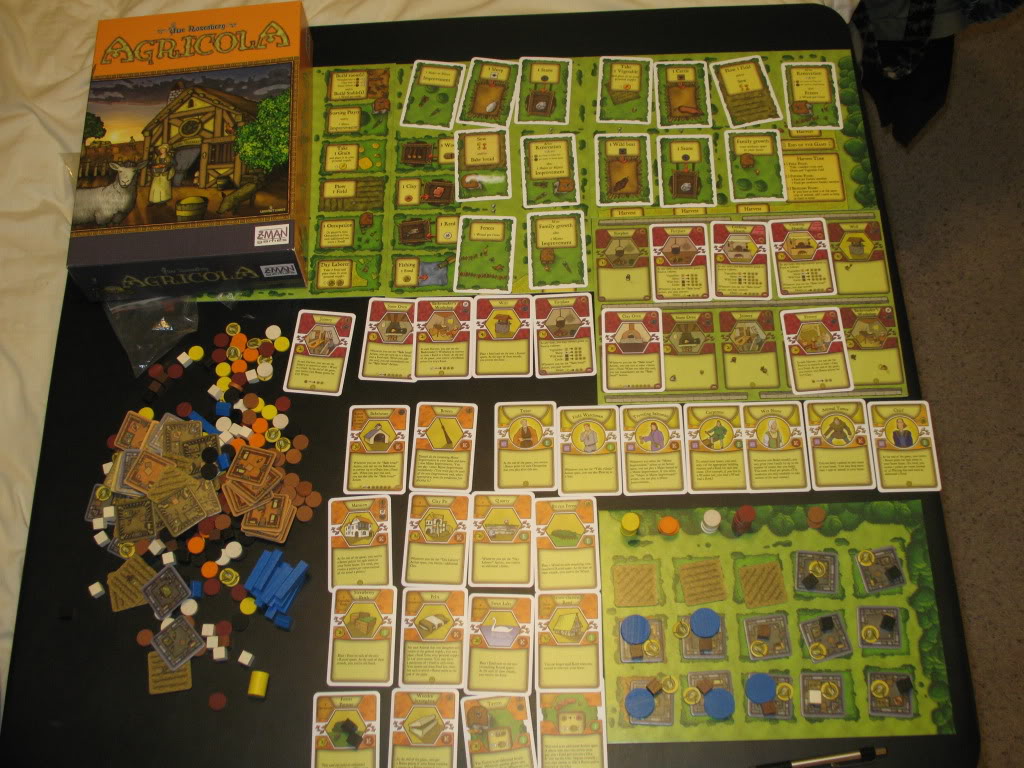 All things said this is the reason why I feel like people should have more euro games in their collection.  For me they have been a great addition to my shelf that my wife and I find ourselves picking up and playing multiple times over and really enjoy playing them.  In my next article I hope to come up with a list of my personal ten euro games that everyone should have in their collection and why I feel that way about them.  Until them guys remember to grab some friends together and play some games.

Randolph Chacon also known as TheOfflineGamer is a gamer that loves to play either on or off the table. Through his blog on tumbler named TheOfflineGamer he writes about his gaming sessions as well as his passion for the hobby.

The Next Evolution in the Golden Age of Board Games