King Louis the XVI was neither the worst nor the dumbest of the rulers of France during the 17th and the 18th century. Although one could say that he lacked a certain determination – a fact that may be perceived as an indication of cowardice, he cannot be considered as particularly mean or nasty for his era (let us not forget that the competition in that domain was rather fierce…). On the other hand, the publicity given to some “saucy” details regarding the private life of his wife (the fabled Marie Antoinette), definitely affected Louis’ public image, but then again, no one can sanely claim that the scandals of a queen may be the sole cause of a revolution (unless we’re talking about some amazingly humongous, supergalactic, inter-species-erotic scandals)

This card game is not about the scandals of Marie Antoinette. After all, it is called “Guillotine”, not “Scandals”. On the contrary, it focuses on heads: Initially, as parts of the human anatomy; after a moment in time, as contents of baskets or spike ornaments. 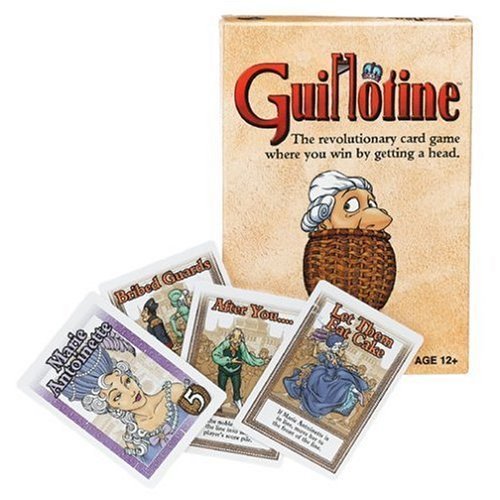 The players (2 to 5) are given the privilege to impersonate for about 30 minutes (the duration of each game) the sensitive souls with the modest hats, those deeply political figures, without the help of which history would not have evolved as rapidly. At last, ‘Guillotine’ pays appropriate homage to the underestimated class of executioners, and portrays them in a time when there services were very much sought after: Revolutionary France.

Gaming purpose focuses on “collecting” the heads of the most famous of nobles, military officials and members of the clergy, or any other rotten supporter of the Ancien Régime. Of course, the value of each collected head is connected to the reputation of the deceased: The executioner who reaps the iconic head of the King is valued much more highly that another, who only manages to behead a puny piss boy, or a court guard.

Game mechanics are wonderfully simple: the noble cards are arranged in a line, each player collecting the head of the noble at the front. Players can alter the arrangement of the line, by playing specific action cards (such as bribing the guards, rescuing a Noble etc.). The player with the most valuable collection of heads wins. It’s that easy. It’s luck you need in this game, not wits.

Still, this simplicity adds to the overall enjoyment. It is not only the hilarious artwork of Christopher Rush, Quinton Hoover and Mike Raabe; Guillotine exudes an aura of lightness (in a “let’s-all-chop-heads-and-sing-till-we-get-tired” kind of way). Chopping and singing. Or to put more eloquently: chopping as entertainment for the masses.

The game keeps a loose connection with historical events. Players can reap the heads of King Louis, Marie Antoinette, Rovespiere (whose decapitation historically marks the end of “la Grande Terreur”, which partially takes place in the game as well), while other action cards make reference to famous punch lines (‘let them eat cake’) or literary figures (the ‘Scarlet Pimpernel’).

Nice game: easy as pie; and funny. “Guaranteed to brake the ice at parties“