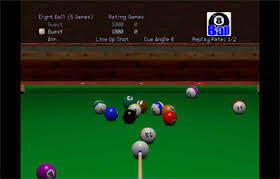 The big issue is whether this huge amount of content and modes is worth wading through today.

If you’re a pool fan it’s probably safe to say that it is though. Despite the game’s slightly dated visuals it plays a fairly solid virtual rendition of the ball potting sport.

The controls are undoubtedly the most important element of the game – without feeling suitably responsive and solid the main meat of the game would be largely worthless.

So it’s good to see they’re not bad. Not perfect by any means, but workable enough. 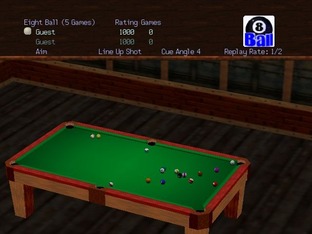 Moving your cue (seemingly held by the invisible man) is done with the analogue stick. Adjusting the cue angle is done with the right C-button, while holding the R trigger helpfully allows you to see things from an overhead perspective.

Hitting the ball is a little odd though. You have to hold A, and then pull back the analogue stick, pushing it forward to strike the ball. The strength of the shot depends on how quickly you move the stick.

It’s unintutive at first, but eventually you get used to it. You can see what the developers were going for at least, attempting to recreate the cue movement with the analogue stick.

You can then start picking through the games many options and modes. 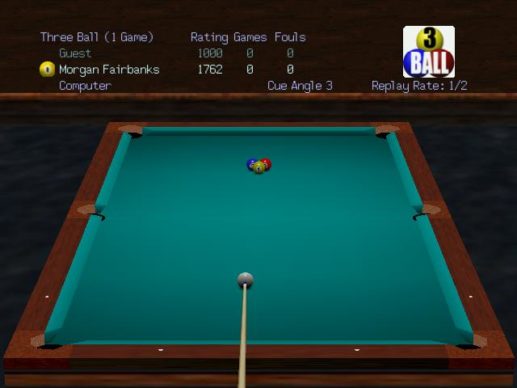 There are nine variants of pool to choose from, and you can play in one-off matches, tournaments and more for each.

Four of them are the same thing but with a different number of balls though.

3-ball, 6-ball, 9-ball and 10-ball all see you potting the balls in numerical order, with the person to pot the last one the winner.

I personally have always found this version of pool to be a tad unfair (you can pot all but one ball and still be the loser), but I know many people who swear by it.

For everyone else you have the reliable, trusted 8-ball mode, with the option to play it US or English Pub style.

If you don’t how this version of pool works i’m surprised you’ve managed to read this far into this revisit. Suffice to say, it’s the one version of pool you should think of when someone mentions the sport to you.

You choose a colour/ball type (plains or stripes) and you have to pot all your balls and the black before your opponent.

Straight Pool, on the other hand, is pretty much pot any ball on the table that you can up to a certain pre-set total. A little mindless, but fun enough.

Rotation sees you attempting to rack up a score of 61 before your opponent with 120 points available on the table. This is one of the less enjoyable variants.

Bank Pool is even more torturous, only allowing you to pot a ball if you hit the rail during your shot. 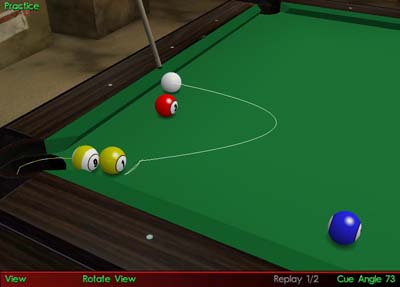 One Pocket is slightly more interesting, and sees you elect a pocket from the far end of the table which you must then try to hit as many balls into as you can. This one is like a hybrid of Hungry Hippos and pool, but it’s still not quite as good as that sounds.

That’s quite a lot to get your teeth into, and if you’re in the market for a pool game on the N64 (well, you might be) you won’t get much better than Virtual Pool 64.