About a week ago, we announced Twin Galaxies video game trading cards being featured in the non-sport update price guide. Obsolete Gamer was able to speak with Walter Day and Grace Snoke of Twin Galaxies International about their trading card rollout.

How did the idea come about to create video game trading cards?

Walter: The Twin Galaxies Video Game Trading Card Set was originally created to celebrate Twin Galaxies’ 30th Anniversary. But the vision for the card set soon expanded to encompass the history of the worldwide video game industry, with cards created to honor the iconic industry pioneers, the world champions, the video game personalities, landmark milestones and events and significant people who, through their creative contributions, have enriched the global video game community. The card set already honors people including Atari Founder Nolan Bushnell in addition to the most recent world record holders on the hottest new games on the Nintendo Wii, PS3 and Xbox 360.

What were the requirements in selecting who would be on a card?

Walter: The basic requirement to be on a card is to contribute something of importance to the global video game culture, either as a business person, a creative professional or a superstar gamer.

What has the reaction been by fans and those featured on cards?

Grace:  Many of the individuals featured on cards feel honored to be on the cards.  Tommy Tallarico, for example, was excited and recommended other individuals, like Nolan Bushnell, and others to appear on cards and asked us to contact them.  The response of the fans has been curiosity and excited.  They’re interested in seeing where this goes and how it will expand.

Walter:  There has been a lot of support in the initial card sets, which resulted in us going beyond the initial 100 cards that were planned. Already, TGI has held numerous autograph sessions that featured celebrities pictured on the cards appearing at events to sign their cards. Public support for these autograph sessions has been very strong and exciting. On March 16, 2012, at the Smithsonian Institute, Walter Day presented to Nolan Bushnell (Founder of Atari) an enlarged version of his new Twin Galaxies Video Game Trading Card (#165) in front of a crowded auditorium. Both Nolan Bushnell and the audience were very appreciative of the cultural importance of the video game trading cards. 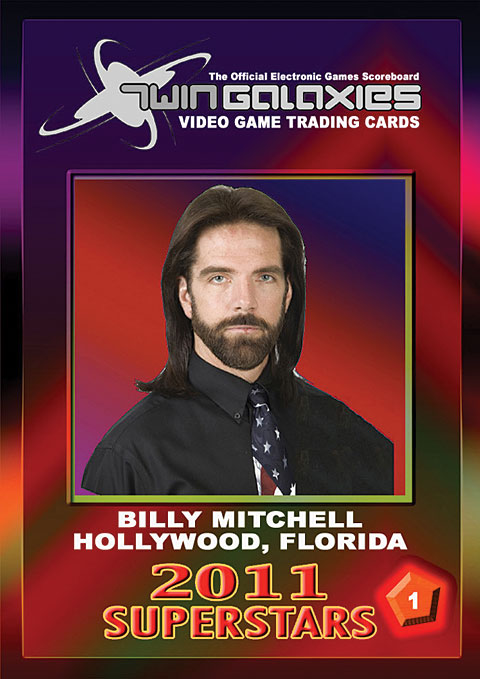 Can you tell us a little more about the upcoming magazine issue featuring the cards?

Grace:  Sure can.  The Non-Sport Update is a bi-monthly publication which contains two parts, the magazine itself with articles and features on non-sport trading cards – like the new Big Bang Theory Cards and other cards distributed by Cryptozoic Entertainment.  This upcoming edition contains information on the 56th Annual Philly Non-Sports Card Show in Allenstown, Penn., where we will be featured and premiering our card to the non-sport trading card industry.  Inside the main magazine is a flyer that talks about the Twin Galaxies Video Game Trading Cards and information on the cards.  There’s another full page toward the back of the book, titled “Trains, Planes and Video Games” which talks about the history of video games and the fact that Twin Galaxies International and Non-Sports Update will have a feature displayed at the Smithsonian launch event “The Art of Video Games,” March 16-18.

The front cover of the Non-Sport Update Price Guide features a number of cards available in our card set and promotes the fact we will be featured at their upcoming card show.  The Price Guide contains pricing and information on a large number of card series both past and present. 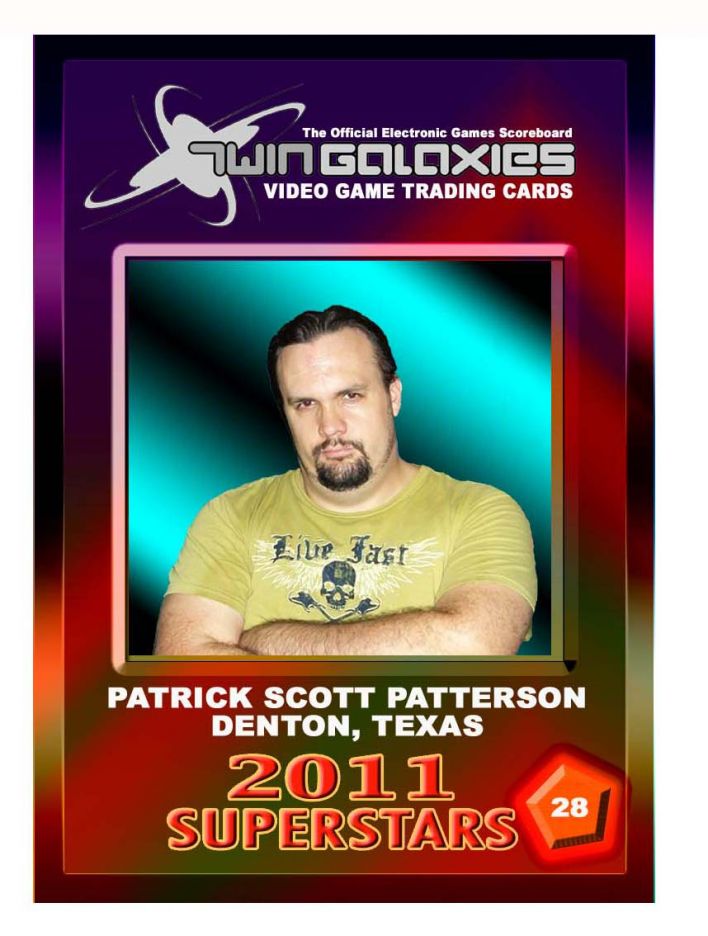 Can you tell us about some of the rare and error cards one can get?

Walter:  Rare cards are produced as limited editions that are individually numbered on the back, with each card having its own registration number. The rare cards are randomly distributed among the plexiglass collector’s cases, with the promise of at least 2-3 rare cards in each case. So far, there have been about ten cards produced with only 100 copies printed and individually numbered and five others printed with 500 copies individually numbered. In the cards planned for Series C (coming out in April at the Philly Card Show) and beyond, there are plans to produce numerous cards in limited runs of 50 cards only — and a few as low as 10-25 copies total. These cards will be distributed randomly in many of the forthcoming sets. There have been numerous cards that were printed, released in very small quantities and then with re-called due to typos that were later discovered. Already, there is competition among collectors to get these error cards, too. There have been three error cards so far and two other cards that were re-released due to data changes on the backside text. 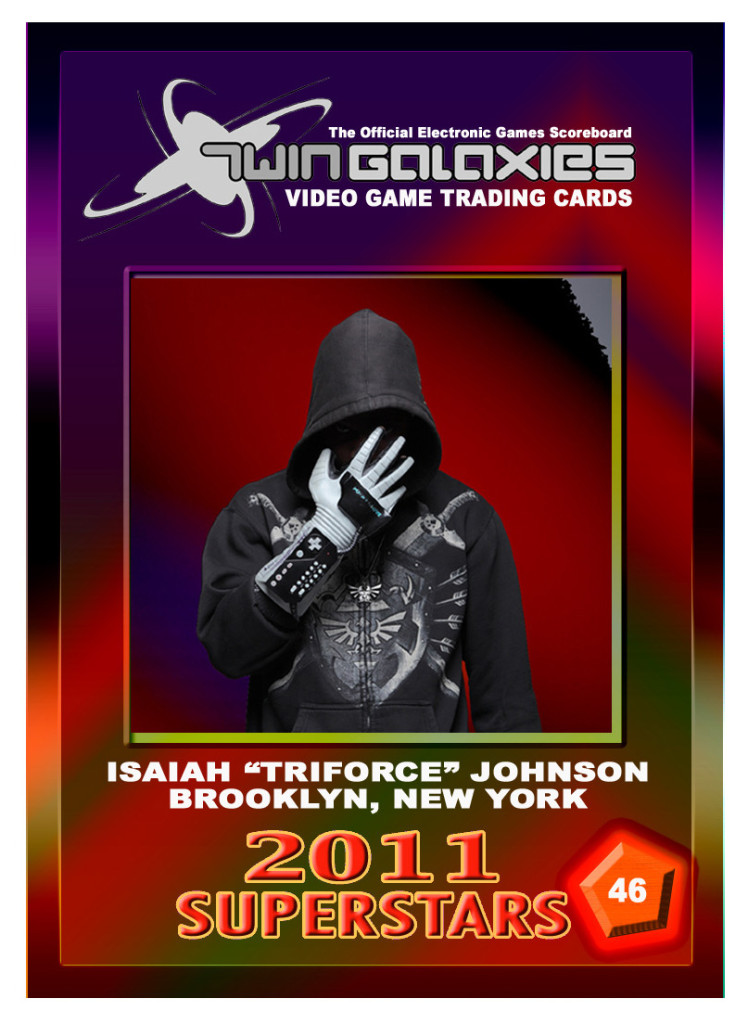 Do you think these cards could become valuable the way baseball cards are?

Walter:  Yes, the Twin Galaxies Video Game Trading Card Set is the gaming industry’s first set of trading cards and we hope to position it to be on a par with TOPPS baseball cards and become the definitive card set that commemorates gaming accomplishments in all genre of gaming.

What about those who want to have their card signed, any advice?

Grace: Definitely.  Throughout the year we will be doing various card signings at multiple locations.  For example, Midwest Gaming Classic, which takes place March 24-25, will be doing a card signing ceremony.  People will be able to get some cards signed at the Philly Non-Sports Card Show in April.  Information about upcoming shows, once they are solidified, will be posted on the Video Game Trading Cards website.

Some of the individuals who appear on cards will sign cards and send them back if you include a self-addressed stamped envelope.  With their permission, we may post their contact information on the website.  Understandably, some individuals may not wish to have their personal information made public.

What would you say is the most valued card out right now?

Grace: I honestly couldn’t say.  I’m interested to see what the appraisers say in a few months.  I’d suspect that some of the cards that are rarer will be more valued, especially those that are signed by the relevant person.

Walter:  We have already been in discussions with PSA – a firm that specializes in grading and authenticating trading cards – to establish the Video Game Trading Cards as certified collectibles that are preserved and graded in the same way that TOPPS and other more establish baseball cards are.

Do you have a favorite card?

Grace:  My favorite card has to be the Video Games Live Card where I was introduced to Tommy Tallarico and his team after we presented them with their card at a Video Games Live Concert in Sioux City Iowa.  I have always loved video game music and the fact they’re being recognized for the art of music in video games with this card is awesome.

How can we keep up on changes and new releases?

Grace:  We recently launched a website dedicated to the trading cards at http://www.videogametradingcards.com.  This site will contain links to press releases, press coverage, event pictures, information on upcoming events where cards can be purchased, checklists for cards in various lists, updates on individuals who have agreed to be on cards, how to order cards and more.   The site is constantly being updated with both current and past events.