In an uncharacteristically dark story for 1985 Nintendo, the setting is a post apocalyptic Earth in the year 2112 after an alien invasion of the evil Quadrunners. Whether the programmers were Rush fans or randomly picked that year is a mystery that may never be solved. Mad Max’s pixelated brother in spirit, Mach Rider, is the protagonist who rides like the fury of vengeance on the aptly named Mach Bike to different parts of the Earth. His main goal to begin with is simply finding a new spot to call home but along the way finds other humans that need assisstance being liberated from the alien’s tyranny.

END_OF_DOCUMENT_TOKEN_TO_BE_REPLACED 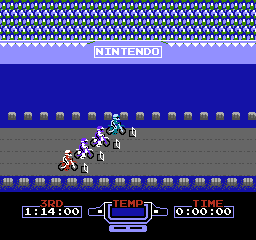 Design Mode is exactly what it sounds like. You get your own NES canvas and get to paint it however you like. Starting with a completely bare track, there are 19 ways to litter it with shit that would drive anyone who tested your tracks out insane. The only bummer here is that it required the Famicom Data Recorder to save and load the tracks, which was never released outside Japan.

END_OF_DOCUMENT_TOKEN_TO_BE_REPLACED

What is gaming? Just kidding, I’ve been gaming since I was a really little kid started off playing Mario Bros series on the original Nintendo, when you had to blow into the cartridge of the game to get it to play. And I was really addicted to Excitebike that game had me going for hours. I finally moved on to Super Nintendo, Sega, and now the next generation consoles. I am really into the Call of Duty series now. I’ve tried out the Wii and Playstation 3 but it really isn’t for me. Those two consoles are collecting tons of dust right now!