Super Star Wars blew my tiny little adolescent mind when I first played it. Graphically it was superb, with crisp and colourful visuals that really captured the look of the film, and even today it still looks pretty damn good. In particular, I remember the Mode 7-generated battle above the Death Star was spectacular at the time, as was the climactic fight against Darth Vader’s TIE fighter at the end – although sadly I only saw this on a couple of occasions because the game was so f*****g hard. But more on that in a minute… 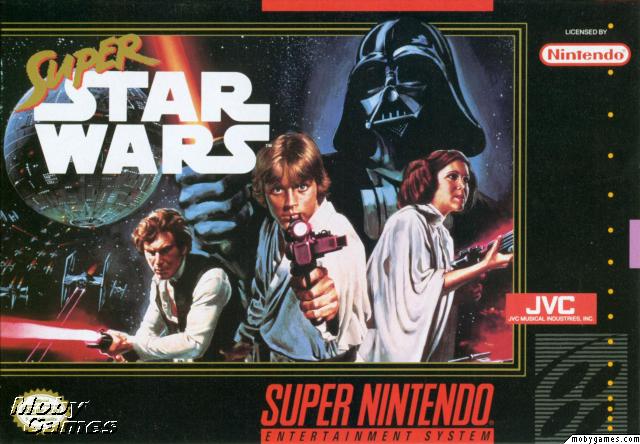 As well as looking fantastic, Super Star Wars sounded amazing. In fact, I’d go so far as to say it has possibly the best sound effects and music on the SNES – the 16-bit versions of the famous Star Wars tunes are absolutely spot on, and the sound effects are probably the meatiest on the console (apart, perhaps, from the OTT gun noises in Super Smash TV). Particular praise should go to the noise that the womp rats make when you shoot them – it sounds more like a train being shunted off a bridge than the demise of a fleshy sci-fi creature (listen to the video below to hear for yourself). But then again, the extravagant sound effects are in keeping with a run and gun game that has all the knobs turned up to 11 – I mean, practically everything explodes in a ball of flame when you shoot it, even the Jawas (who also fly comically off the screen with a satisfying ‘ooOOOtiiini’ noise lifted straight from the film). 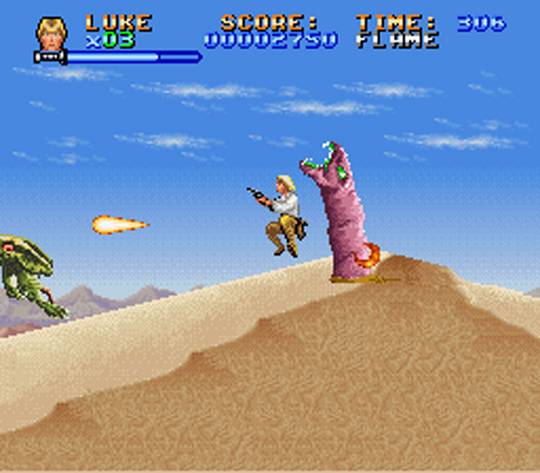 But for all its preening good looks and aural bombast, Super Star Wars was always a little rough around the edges when it came to the gameplay department. Sadly, the massive sprites and evocative music don’t quite cover up the shoddy collision detection, inept bosses and utterly infuriating level design…

…but at the time I could forgive it – the all-consuming desire to see the next gorgeously realised level had me hooked, and the showy visuals – not to mention the fact that it’s Star Wars goddammit – were enough to keep me plugging away until I finally, FINALLY, managed to finish it. Although looking back now with the benefit of hindsight, I’m amazed I had the patience… 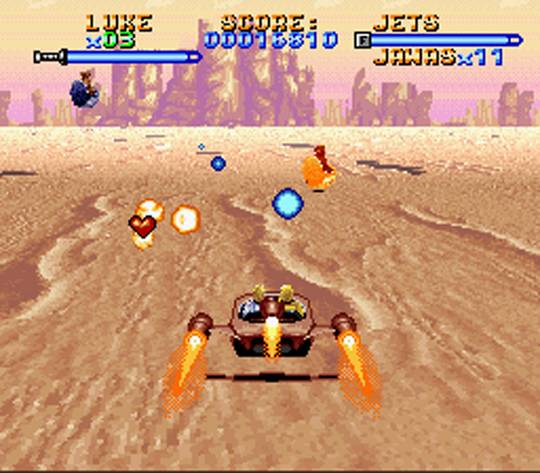 Here at 101 Video Games, we generally write our reviews based on our personal memories of the games, rather than what they’re actually like to play now. The idea is to generate a record of the games that enriched our lives, rather than a list of ‘top’ games – hence the inclusion of games that taught us a valuable life lesson (Rise of the Robots) or that simply made us smile (Dog Walking). However, I got so nostalgic about Super Star Wars after watching videos of it while researching this post, I ended up downloading it from the Wii Virtual Console so I could play it again.

It all started off pleasantly enough as I happily romped across the dunes of Tatooine, blasting the local fauna into oblivion with carefree abandon and generally having a whale of a time. But then I started noticing the cracks…

[Lewis sits playing through the first level of Super Star Wars. Gradually his brow begins to furrow and a slight frown plays across his mouth as he nears the end of the stage. We listen in to his internal monologue…] “Hold on, no matter what I do, I don’t seem to be able to avoid getting hit by these creatures – maybe my reflexes aren’t as good as they used to be? …Or is it because you actually CAN’T avoid them and the developers just decided to throw loads of health boosts at you to make up for it? Wait a minute, here’s the sarlacc pit boss… oh, you can’t avoid his attacks either. And now I’m dead and the restart point seems to be practically at the beginning of the level. That’s …erm… frustrating.” 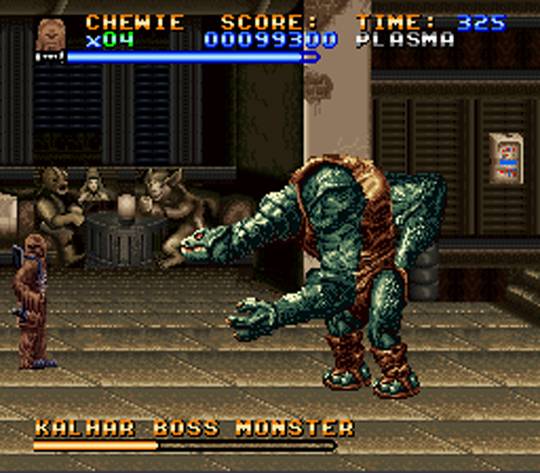 Yes, 17 years is a long time in the world of video games, and little things we now take for granted – like reasonably spaced restart points – were thin on the ground back in 1993. But there are some aspects of Super Star Wars that are frankly just the result of poor design, like the inability to avoid getting hit, or the all-too-common ‘leaps of faith’ where you can’t see the platform you’re meant to be jumping onto (which usually results in you landing in that all-too-common ‘insta-kill’ lava instead).

[We rejoin Lewis’s inner monologue as he starts level 3 outside the Jawa sandcrawler.] “Ah, I remember this bit! I love that noise the Jawas make when you shoot them! Right, just need to make my way to the top of the sandcrawler by navigating these moving, wafer-thin platforms… Oh. I’ve fallen right back to the beginning. Right let’s try again… Hmm, seems a little tricky to persuade Luke to do that spinny ‘super jump’ thing, I seem to end up doing a ‘normal’  jump half of the time… Oh. I’ve fallen again.] 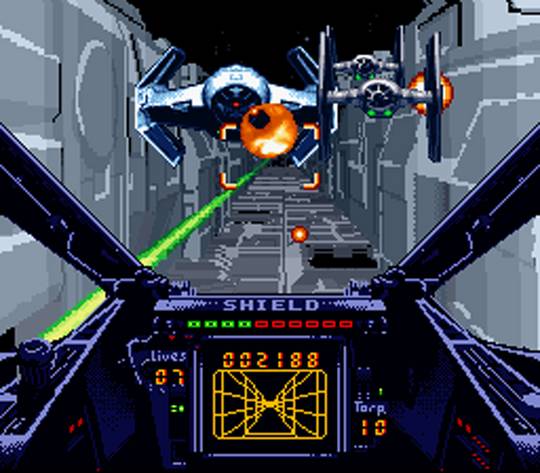 “OK, I think I’m getting near the bottom of the sandcrawler now, although those myriad boucing lasers and security flamethrowers were a tad annoying. Still, I’ve been playing for ages, so I can’t be too far away… Hold on, I’ve come to a dead end and I can’t see what’s at the bottom of this drop. Must be another platform I guess, I’ll just jump down… Oh. It’s ‘insta-kill’ lava. That’s a bit… erm… irritating. Oh, and I’ve been taken back to almost the very beginning of the level… Right, I think I need to stop playing and find somewhere I can hurl this controller in rage without damaging any expensive electronics equipment.”

In a nutshell, Super Star Wars is just a tiny bit infuriating. But my younger self just couldn’t get enough of it – perhaps in the pre-internet, pre-’instant access’ era I had a little more patience. And let’s face it, games were just harder back then, not like these namby-pamby modern games.

So bearing that in mind, I’ve decided to embrace Super Star Wars for what it is and dismiss its faults as the foibles of a bygone age – welcome to our video game canon old friend. Although if it’s all right with you, I’d prefer to remember you as the esteemed game of my youth rather than the frustrating throwback I bought in a fit of nostalgia.

Lewis’s withered thumbs and sunken eye sockets give an indication of just how long he’s been playing video games. He claims that the first video console he owned was made of wood and had circuits made of string. He occasionally writes for Eurogamer, and can also be found shuffling around the blog A Most Agreeable Pastime (http://amostagreeablepastime.wordpress.com/), mostly wondering where he left his slippers. If you want to hear him bang on about films, visit 101 Films You Should Have Seen... Probably (http://101filmsyoushouldhaveseen.com/).