Editorials
July 20, 2012July 20, 2012 Simon Lethbridge 0 Comments alliance, ariloulaleelay skiff, chenjesu broodhome, classic games, d.o.g.i, earthling cruiser, mmrnmhrm transformer, shofixti scout, star control, syreen penetrator, yehat terminator
The first Star Control title really is a game of two-halves. The ‘Main’ game is seen as the strategy side of the game with its turn-based, territorial expansion-based shenanigans, while the ‘Melee’ mode is seen as the action, shoot ’em up side, but it is a lot more strategic than people realise itself. Each of the fourteen starships in the game has many variables, as can be seen in some of the screenshots below and, while it’s possible for any one ship to defeat any one other, there are certain ships that are better or worse against certain others, and many crafty tactics can be employed to exploit their weaknesses.
There really is nothing like an epic Melee battle between two experienced, well-matched combatants. Each lurking on opposite sides of the screen trying to guess what the other is thinking, the occasional skirmish to test each other. They can be very tense affairs! So, for the benefit of any budding Melee-Masters, the next installment in my series of Star Control features will take a look at the ships used by the seven races that comprise the Alliance of Free Stars (the ‘good guys’)…
Chenjesu Broodhome 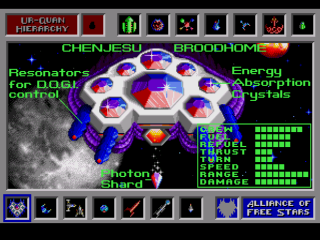 Arguably my favourite ship in the game! This is the flagship of the Alliance fleet, used by the crystalline Chenjesu species. While not particularly quick, it’s big and powerful enough for that not to matter most of the time. It’s primary weapon is the Photon Shard which is a round projectile with an infinite range – when you launch one, keep your finger on the fire button and the shard will continue on for as long as you hold down the button! It’s the longest range weapon in the game and causes devastating damage with a direct hit (some smaller ships can be taken out with one strike), but you can only fire one at a time. When you release the fire button the shard will fragment into eight smaller pieces that travel a short distance causing minimal damage. 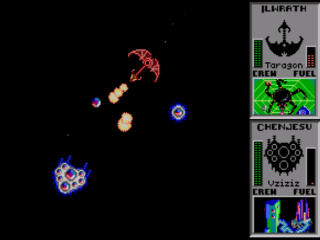 The Broodhome’s secondary weapon is the D.O.G.I. Creating one of these will use all the fuel supply but the D.O.G.I will then home in on the other vessel and each time it makes contact (and makes an amusing ‘barking’ sound!) it will drain your opponent’s fuel. These are very useful, and you can deploy up to four of them, but some of the ships with powerful, short-range weapons like the Avenger and the Drone can take them out with ease. The Broodhome’s biggest weakness is its lack of maneuverability which, amongst other things, means that it’s the ship most vulnerable to planetary gravity, with each high-velocity collision causing a significant percentage of its crew complement to be lost, but it’s still a imposing, numerously-crewed vessel that you’ll do well to come out of a battle with alive!
Ship Rating: 5/5

Smaller and more agile than the Broodhome, this nippy craft crewed by the Pterodactyl-like Yehat is a formidable offensive and defensive craft. It’s armed with twin, rapid-fire Pulse Cannons which can pepper an adversary’s ship with many small, weak shots which can collectively cause a lot of damage, especially to larger ships. The defensive side is catered for by an impenetrable Force Shield which can be activated at will. Both of these eat through the Terminator’s fuel reserves though, and it doesn’t have very big tanks! Luckily its refuel rate is pretty high which, combined with its speed and maneuverability, makes it a tricky opponent that’s hard to beat in the hands of an experienced player. The cannons have a decent range so you can hover just inside it, popping off occasional shots, and using the shields to protect you from the shots you can’t avoid. The cannons have a great sound effect too!

The Mmrnmhrm are best mates with the Chenjesu, a friendship that would lead to the creation of the devastating Avatar battleship in Star Control 2, but in this original their ship is interesting, but ultimately pretty average. As you may have guessed from its name, this craft is able to alternate between two forms. The first and default form is a slow but maneuverable one with twin short-range Laser cannons. With the tap of a button, however, its wings sweep back and its powerful afterburner kicks in, turning it into a fast, long-range craft which fires twin, long-range homing missiles. Both forms come with problem though – the first form is very slow and the second has a horrendous turning speed meaning it’s basically only usable in a straight line. The trick is to attack with the lasers, retreat with the faster craft, wait until the fuel reserves build back up, then zoom in close to your opponent and, change back, and let rip with the lasers. It’s a sound tactic but the ship is pretty clumsy in practise. It can be reasonably effective but isn’t particularly enjoyable to use. 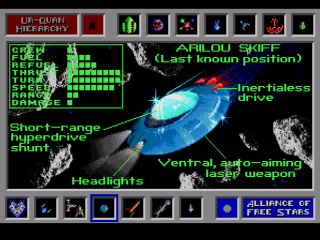 They’re a brainy bunch, those Arilou, so it’s odd that the Skiff is one of the weediest ships in the game! This is one of three ships that can be destroyed by a single shot from one of the larger vessels, but of those three, it’s almost certainly the handiest. It’s very fast, has the tightest turning circle in the whole game, and most impressively it comes equipped with an inertialess propulsion system. This means it can reach maximum velocity instantly and stop just as quickly, and is also unaffected by planetary gravity too. As those with a knowledge of astrophysics will know, that makes the Skiff one agile little bastard, and it can even hide next to planets to lure larger ships into the gravity well! On top of all this, the Skiff is also equipped with a ‘Hyperdrive Shunt’ which basically teleports the ship to a random location in the playfield (whilst making a funny noise). This is extremely useful for escaping from any hairy situations, and with the Skiff’s meagre crew complement, there are many! Its weaponry consists of a short-range, rapid-fire, auto-aiming laser, which can do a decent amount of damage if you can get a full volley off without taking any fire. The best tactic with this little ship is to sneak up behind a ship, pummel them for as long as possible with the laser, then ‘shunt’ out of harms way. Repeat until ship is defeated! 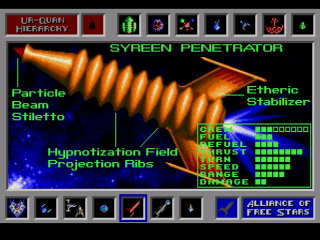 Clearly a riff on the sultry green alien women from Captain Kirk’s adventures, the female-dominated Syreen race is one with whom you can have many interesting encounters in the sequel to this game (including shagging one of them!). Here however, the innuendo’s are limited to their ship (and its name) which is pretty fast and armed with a fairly weak Particle Beam. The ship’s most helpful feature though, is its ability to project the hypnotic songs of its crew outside the ship. When done in close range, the song lures crew from the opposing ship out of their airlocks and into space where they can be collected by the Penetrator, adding them to its own crew roster. This can be done until even the largest enemy ship is down to a single crew member so you just have to finish them off with a single shot! 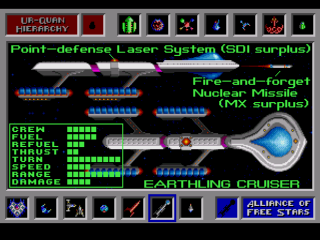 Hooray, it’s our ship, and a pretty decent one it is too! It takes a while to get going and even then it’s a bit lumbering and not particularly fast, but its armaments make up for that. The Cruiser’s main weapon is a plentiful supply of Nuclear Missiles which do a decent amount of damage and have a range bettered only by the Broodhome’s Photon Shard’s and the Podship’s Plasma thingies. This means it can stay as far away from its enemy as possible, using its excellent turning speed to whip round and fire off a missile before continuing on its way. Any time an enemy does get close enough to shoot at the Cruiser, it can take down weaker projectiles with its auto-targeting Point Defense Lasers which can shoot up to four things at once. This means its the only in the game ship to be effectively immune to the Dreadnought’s bloody fighters (much to its users chagrin!).

The Shofixti are a proud and courageous species modelled on the Japanese of old, so it’s a shame their ship sucks ass! It’s pretty fast and maneuverable, but has a weedy Energy Dart as its main weapon which, contrary to the picture, can only fire one shot at a time doing minimal damage to your opponent. That’s assuming you even get a chance to shoot as the Scout has a tiny crew complement and can be destroyed by a single shot from larger ships, and still in seconds by some lesser ships. The only thing it’s remotely useful for is its Glory Device – a self-destruct which, when detonated close to an enemy, can do a decent amount of damage. When under computer control, they bide their time waiting for a chance to get close enough to deploy the Glory Device, then blow themselves up! That says it all really…

What is gaming’s ‘Greatest Generation’?

A Call to Restore FMV Games