Hello.  I’m RetroKingSimon (or RKS to my friends).

Some of my many interests include retro videogames, movies, and anime, but I have been complacent in the pursuit of these interests for quite some time now, espically since I’ve been married. This is my attempt to make amends, and will offer the opportunity/excuse to sample some of the best, and no doubt worst, these subjects have to offer, including some that I’ve been meaning to try for many years, and will also allow me to re-evaluate some old favourites that should perhaps be better consigned to fondly-recalled memories.

In addition, I have a curious fondness for making random, and often nonsensical ‘Top Five’ lists, often with the help of Luke. These will also form part of my tomfoolery here, and are just for fun. Any of you that read these musings, I encourage you to make comments or let me know what you think, good or bad, but trolls and other hateful rapscallions can direct your bilge elsewhere. 🙂

Anyway, to mark my first post here, I thought it might be prudent to list my favourite games. There are 30 here, though I like many more of course, and with the exception of the first one, they are in no particular order. 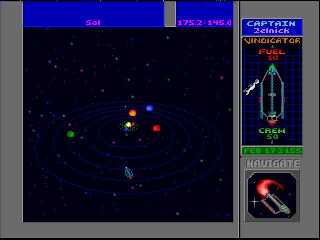 My favourite videogame of all-time? Without question! Not many sci-fi TV shows or films even have a story as engrossing as this game! It’s an epic space adventure game where, controlling a large, but weak starship, you must wander the galaxy searching for artefacts, forging alliances with or fighting against the many alien races, gathering resources, and building a fleet with which to take on the evil Ur-Quan Heirachy who have enslaved Earth and several other worlds. Featuring hectic real-time battles, hours of speech, and countless things to do, it’s a sci-fi game that has everything. You even get to score with a green-skinned alien girly for goodness sake! The best thing of all about this game is that you can download a conversion of the 3DO game for nothing and play it on any modern PC. Get it here (the game has had a name change though, it’s now called Ur-Quan Masters).

Granted, there’s a lot of games I haven’t played, but right now this is the finest arcade-style racing game I’ve ever played. You have three opponents and racing takes place on long stretches of road also populated by civilian drivers ranging from cars right up to coaches and juggernauts. There are a few cars to choose from when you start the game and successful racing unlocks many more. It’s all fairly standard stuff, it’s just done so well. Control over the cars is precise, the courses are busy and superbly designed, and opponent AI is pretty good too. This all combines to make some pretty awesome, hi-octane racing! In my humble opinion, this was and remains the pinnacle of the Burnout series (and marks the final installment before Electronic bloody Arts bought the franchise and ruined it), and the arcade racing genre in general.

Introduced to me by my good friend Luke, this game blew me away when I first played it in the late 80’s, and has remained a firm favourite. Despite its name, this is actually the fourth game in the convoluted Wonder Boy/Monster World series of games and almost certainly universally considered the best. The game, which takes the form of a sprawling arcade adventure, carries on directly from Wonder Boy in Monster Land, and sees Wonder Boy cursed by a dragon and turned into Lizard Man! And so Wonder Boy’s latest quest begins. He must brave many strange and distant lands in his bid to return himself to Human form, but not before he takes various other forms too! A top game when it was first released and it remains a top game today, arguably the best game of the Master System.

Not strictly speaking a sequel, Gauntlet 4, released on the Mega Drive/Genesis exclusively, was more a tarted-up conversion of the original and features four different modes. The Arcade Mode is a near-arcade perfect port of the orignal Gauntlet arcade game from 1985, but with the addition of an all-new soundtrack, the Record Mode, which is a variation on the arcade mode tailored to achieving high scores, the Battle Mode is a multi-player fight to the death, and best of all is the Quest Mode, which is an all-new Gauntlet game where the player must battle through the ten floors of each of an ancient castle’s four towers before tackling the dragon dwelling therein. Including some RPG-style features, this is a whole game in itself. Overall, for any Gauntlet fan, this is the complete package. 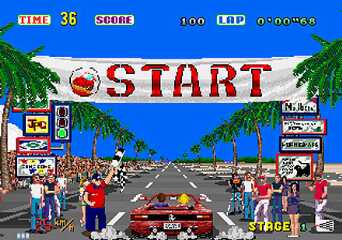 Until the Burnout series came along, this was still my favourite driving game ever, and in many ways is responsible for my love of videogames to begin with. Everyone knows all about this classic by Yu Suzuki which is still as enjoyable today as the day it was made, in my view. Sure, OutRun 2 and Coast 2 Coast superceded it in many ways, not least graphically, but do they contain the spirit and atmosphere of the 1985 original? I can’t think of many driving games that don’t even have any opponents which are still as enjoyable as this! Simply cruising along listening to Magical Sound Shower is a treat matched by only a small number of other gaming experiences. It’s a shame so few people will ever get to play the arcade behemoth now!

That’s it for now, more to come.

Ode to the Angry Sun