The differences between the gaming cultures in Japan and the ‘West’ really are quite amazing sometimes. Obviously certain genres are more popular in certain parts of the world but even some that are universally popular, such as shoot ’em ups, can be quite different. The Japanese like bright, cute, and often very weird games while us Western gamers apparently have darker, more realistic, and often more violent tastes. A great example of this peculiar trend is Insector X by frequent purveyors of cuteness, Taito. Accordingly, this original is colourful and full of cute characters. Most Western gamers know it as a MegaDrive release, however, and this version features much more realistic graphics devoid of cuteness. When I recently decided to reacquaint myself with the game, this time by sampling the arcade version, it was this kind of game that I was expecting, but as you’ve probably already determined, it’s not the type of game I found.

No versions of the game seem big on story, not even the ones that have instruction manuals as far as I can tell, but it seems the premise involves some sort of insect infestation, but they’re not just ordinary insects – these ones are cybernetic terrors! Rather than using a combination of insect repellent and the odd hydraulic press, however, the fate of the world (whichever world it is) is instead left up to a hero who rivals the insects in terms of his diminutive stature as well as his hardened resolve. He goes by the name of Yanmer and only with your help can he rid the world of the Dark Ruler Queen, etc. Five side-scrolling stages stand between the two adversaries as well as a large number of exoskeletal goons who, I’m happy to say, do not exclusively possess the luxury of flight – Yanmer is not only equipped with wings himself which enable free and unlimited movement around the stages but he also wears a hat topped by a propeller for good measure. 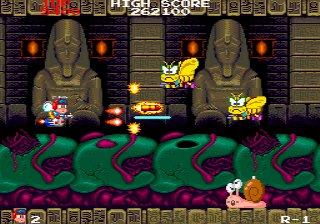 The freedom of flight would be useless without something a bit more aggressive to back it up with though, as a single hit from one of the spindly critters is enough to put him down. To this end, Yanmer is also equipped with the standard weedy gun which initially fires a single small shot. It can be powered-up fairly quickly by collecting ‘P’ icons though, while the similar ‘S’ icons put a bit more wind in his wings, the ‘A’ icon equips an autofire option, Lightning icons are smart bombs, there are acorns to collect for bonus points, and there’s also the odd 1up to look out for. Then there’s the special attacks. There are ten of these altogether which are obtained by collecting insecticide cans carried by some enemies (which is a bit like Ripley carrying an angry Alien around, but nevermind) which alternate between ground and air attacks – coloured brown or blue respectively – of which there are five apiece. They are seemingly awarded randomly but generally consist of either bomb-like things to hammer the numerous floor-dwelling enemies, and various types of missiles for taking out the more numerous airborne nincompoops. 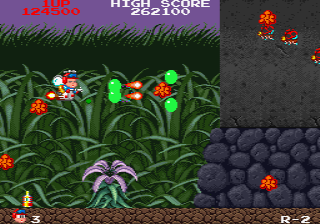 These special attacks can also be powered-up by collecting successive icons and before long our heroic fairy is hurling an almost-unbreachable wall of death! That doesn’t make it the easiest arcade shmup of all-time but it’s far from the hardest either. Least that means you should get to see all the stages though, but are they worth seeing? Graphically, it uses a mixture of styles. As mentioned, the sprites are mostly cute creatures such as flies, bees, dragonflies, moths, and ladybirds in the air while the ground forces are made up of fish, snails, flowers, and even mushrooms. The stages themselves, on the other hand, are made to look a bit more realistic for the most part. They’re named Desert, Plateau, City, Jungle, and Their Empire, and feature a decent mixture of man-made as well as natural environments, both indoor and outdoor. 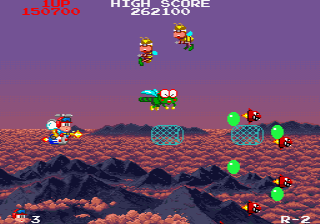 Each stage, or ‘area’, is guarded by a giant creepy-crawly too, such as wasps or spiders. These things reminded me of the bosses in Fantasy Zone – they have limited movement and seem to content merely flinging a load of bullets your way. They’re not nearly as tough as the infernal guardians in Sega’s older cute ’em up but they do look half-decent, as do many of the backgrounds and some of the amusing enemies too, but I can’t help thinking this looks like a game designed a few years earlier – things were generally quite a bit flashier than this by 1989. The flashiest thing here is probably Yanmer’s weapons, with the screen often brimming with his multi-coloured bullets and missiles, but most effects, such as the explosions or enemies taking damage are quite poor. Still, it’s pleasant and cheerful enough, and sounds the part too. The music is rather on the loud side but most tunes are catchy and suit the cutesy action pretty well. 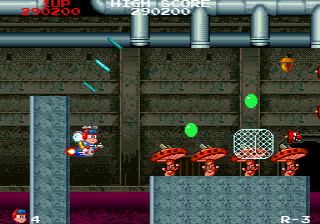 For all its decent-though-unspectacular aesthetics, though, I’m struggling to think of any one moment or section of the game that really stands out. Control of Yanmer is good, although it’s possible to speed him up too much, but there isn’t really much in the way of foreground scenery or obstacles to manoeuvre around which was disappointing and made progress a bit… well, boring at times, especially as there isn’t really any super-tough, nerve-fraying parts either. A balanced difficulty level is rare in a shmup, admittedly, but sometimes you need a crazy, hectic section to keep you on your toes! It’s not a very long game either – a player of moderate skill should be able to play it through in less then twenty minutes with a bit of practise. Insector X is far from a terrible game and is well worthy of a blast if the chance arises – what else gives you the opportunity blow the crap out of confused-looking snails, frowning moths, and evil mushrooms? – but when the most noteworthy thing about a game, and an arcade game no less, is curiosity over its graphical style compared to a more popular version, it can’t really be wonderful news either.