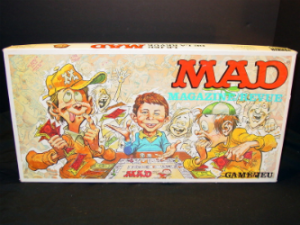 If I had to pick a game that was so bizarre and crazy that it was nutty fun, The MAD Magazine Game would be it.  Back in the 70′s MAD Magazine was a serious force on the magazine stand.  I remember reading them and laughing at their fresh and irreverent presentations of everything from spoofing the latest movies and TV shows, to social-political commentary dressed up as jokes, to the Road Runner/Coyote style violence of Spy vs. Spy.   And so when Parker Brothers came out in 1979 with a board game based on the MAD Magazine zeitgeist, it was a must-buy.

You know you’re playing a different kind of game right from the start when you learn what your goal is: to lose all your money.  It’s much harder than it sounds, though, with the Card cards making your life difficult with cards like, “If you are a Boy Person, Win $500″ or “Change Chairs With Anyone.”  You can get lucky, and get a Card card that says, “If you are GOOD LOOKING, stand up and imitate your favorite animal, and lose $2,000″ or “Stand up and BOO the person on your left. Also lose $1000.”  As you can see, the game plays a little bit more wacky than your average board game fair.

Moving about the table is an integral part of the game, so don’t get too comfortable in your chair.  Between spaces on the game board that move everyone to a new seat, to Card cards that do the same, expect to have to pick up your drink and move to your right or your left.  But you have to leave your money behind, which can be a good thing (if you had more than anyone else) or a bad thing (if you were almost broke!).   This means that there really is no effective strategy to winning the game that can be planned from the start; the random elements send any plan into disarray as quickly as it is formulated.  Perhaps this was Parker Brothers’ version of Chaos Theory in action!

The game board is filled with classic MAD Magazine art and zany humor.  You can see art from Spy vs. Spy, The Lighter Side of…, site gags from Don Martin and Sergio Aragones, and more.  And much like the magazine itself, there are little surprises throughout the game board that you stumble upon as you play.  Some scenes should bring back memories, and perhaps a smile or guffaw or two.  Just make sure your legal name isn’t Alfred E. Neuman, or you’ll have to collect the special $1,329,063 bill included in the game.  Did I mention the game is wacky?

The MAD Magazine Game is yet another timeless family classic, and is recommended for 2 to 4 players ages 8 and up.