How many times have you walked in an elevator and starting thinking you were in the 1983 Taito game, Elevator Action? Never! Really? It must be me, I am strange like that. 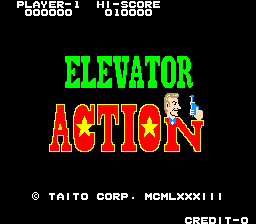 Since Elevator Action is turning 30 this year, I thought it was a good opportunity to have a game, for old times’ sake. So, how does it stack up after all these years – is it still fun to play? Read on. 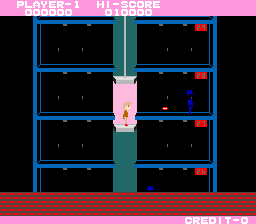 For those that have never laid eyes on this game, the protagonist is Otto, or Agent 17. Otto is tasked with collecting secret documents from rooms (behind red doors) within the 30-floor building. He makes his way between floors via the elevator (hence the title – d’oh) and on certain floors, he can use the escalators. To make things interesting, enemies appear at the most inopportune time to get Otto and derail his whole secret mission.

Otto is no slouch when it comes to defending himself. As a secret agent, he is armed and dangerous. His trusty gun can fire three bullets per shot. If that doesn’t work, the enemies can be kicked. By far the most satisfying way to eliminate the bad guys, is by shooting a light on the ceiling while in the elevator, dropping the light onto the baddies. The byproduct of a dropped light is that the hallways become temporarily dark which makes the enemies harder to see – makes the heart rate go up a notch too. Another way to get kills on the board is to crush the bad dudes with the elevator – gee I’m a sadist. 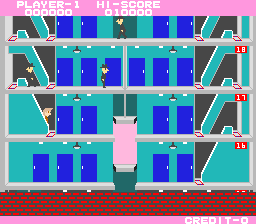 After Otto collects all documents, he has to make his way down to the basement where he can escape via his getaway car. For some inexplicable reason, Otto proceeds to another building for more secret document hunting instead of driving off in the sunset. Ah, once an agent, always an agent.

The controls are four-way (up, down, left, right) with two buttons, one for firing, the other for jumping/kicking – Taito catered for right and left-handed players by having these buttons on either side of the centred joystick. The game can become hectic, with the timer ticking down and enemy spies that pop-up just when you don’t want them to. Even though the action may seem limited, the game is still as much fun to play now, as it was 30 years ago. The graphics and sound could do with a spruce up, but back then, it was all about instant playability – which Elevator Action has in abundance. 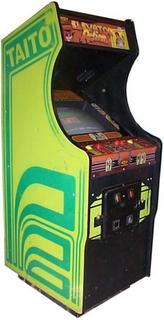