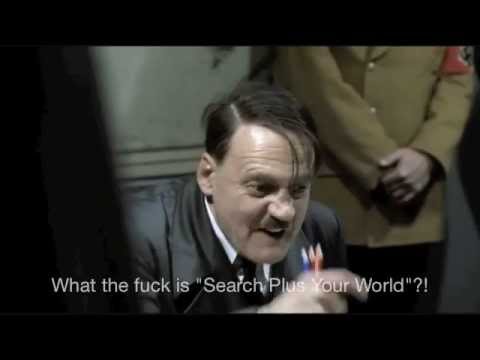 Google is now modifying your search results based on what you and your friends do on Google+. Pretty much this will no longer give you search results based on what’s relevant but more based on whoever spams links on Google+ the most. Hopefully this will just be limited to your friends and not super spammers that hammer Google+ and other social networking and social bookmarking websites all day long. Not only that but it seems that Twitter and Facebook links will be omitted. They are calling all this Google Search Plus Your World.

In its war against Facebook, Google might ruin more of its image by being less of an impartial search engine. Well it’s already not impartial because if you dump a lot of money on adwords your sponsored links can get you top spots on page 1 but that’s just business.

Now that we got the serious part out of the way, let’s see what Hitler has to say about this.

If Hitler and his advisors are right, then Google will start filtering its search even more and that might make people stop using it more.

Here’s a transcript from this hilarious video:

Advisor: “Yesterday Google rolled out a deep integration of Google+ into its search results”
Advisor: “Now when you search, you get results from your Google+ network blended into organic results”
Advisor: “It has royally pissed off Danny Sullivan…”
Advisor: “…and MG Siegler went batshit on his Tumblr”
Hitler: “He’s just trolling for page views…”
Hitler: “He and Arrington are starting a new TechCrunch”
Advisor: “Mein Fuhrer…”
Advisor: “Twitter…”
Advisor: “…Twitter and Facebook are not included in the results”
Advisor: “Now when you search ‘Britney Spears’ you don’t get her Facebook Page”
Hitler: “If you haven’t done a Hangout with Scoble, Vic Gundotra or Ashton Kutcher…”
Hitler: “…leave the room”
Hitler: “What the fuck is ‘Search Plus Your World’?!”
Hitler: “Who came up with that ridiculous name?!”
Hitler: “I bet it was Sergey!”
Hitler: “What the fuck does that guy do that Google anyhow?”
Hitler: “Play Angry Fucking Birds all day?”
Hitler: “I bet I could kick his ass in Cut The Rope!”
Hitler: “Angry Birds is so played out.”
Hitler: “If I see one more kid with one of those god damned Angry Birds hats…”
Hitler: “…I’ll pop a cap in his pig-bombing ass!”
Advisor: “MG Siegler says Search Plus is AntiTrust+”
Hitler: “What do you expect from a monopoly? They are trying to screw Twitter…”
Advisor: “Google said Twitter walked away…”
Hitler: “Did you really think Larry Page was going to let Twitter and Facebook shit all over his front yard?”
Hitler: “Fuck the full Firehose”
Hitler: “Larry knows that Google+ was too late to the social network game”
Hitler: “Sure they let you share animated gifs but how many times did I need to see that fucking squid?”
Hitler: “Now they’re just forcing Google+ down our throats”
Hitler: “Every time I search for something, now I’m going to get some Tom Anderson philosophical bullshit”
Hitler: “Why did he become interesting only after Myspace choked?”
Hitler: “I’ve posted photos of my favorite sunsets on Google+, cat pictures, Hitler videos…”
Hitler: “…and nothing ever happens”
Hitler: “My fucking Klout score is down again today”
Hitler: “I thought if I got in early on Google+ I could kick social media ass”
Hitler: “Now with Search Plus Your World…”
Hitler: “…Google+ is going to be overrun with spammers trying to be your friend so they can rank for STD clinic searches”
Hitler: “Now I’m going to have to get rid of all those Circles I spent so much time building up…”
Hitler: “…just so they don’t pollute my SERPs with useless social crap”
Hitler: “Of course this just points out how monopolistic Facebook is before the IPO…”
Hitler: “Mark Zuckerberg is probably smothering someone with his hoodie right now”
Girl: “Helga, that picture of you from that frat party is on your Timeline”
Hitler: “Matt Cutts is probably saying it’s good for users”
Hitler: “All of the social media douches are probably saying this is going to kill SEO”
Hitler: “It’s definitely going to change the way I share stuff in public”
Hitler: “I just want my old search results back…”
Hitler: “When I search for Katy Perry…”
Hitler: “…I expect to get her Facebook Page and latest Tweets…”
Hitler: “…not her empty Google+ page”
Hitler: “I knew she and Russell Brand wouldn’t last.” 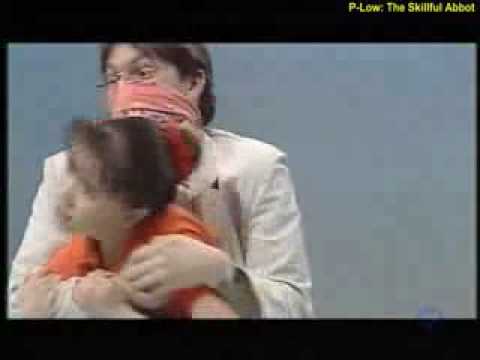