Look past the painful attempts to make Gex a gecko with ‘attitude’ though, and this is a platformer that’s still worth a look. ~Simon Reed

I recall in my revisit of  Gex: Enter the Gecko on the Gameboy Color that the titular lizard had precious opportunity to make his abrasive personality come across – and how that was a real blessing. Sadly, in ‘Gex,’ the game in which the gecko was first introduced to the world, he manages to give you a very good idea of his ‘persona and you know what I find even more annoying than Gex himself? The game underneath is actually not half bad – but it’s overshadowed by the green ones constant chatter. 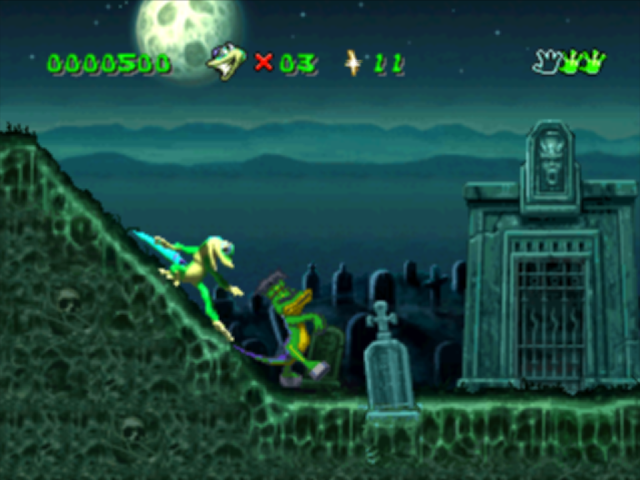 Set up like an old school platformer, Gex sees you travelling around small hubs, each one focusing on a specific location – such as a horror world and a kung-fu universe. So far, so unoriginal. Of course, the game originally came out on 3DO in 1994, so perhaps these old fashioned sensibilities are to be expected. In each stage you have to recover a remote (or two) which then allow you to access new levels. Fortunately each remote can usually be found fairly easily, and are placed in clear view when you’re working your way through a level. 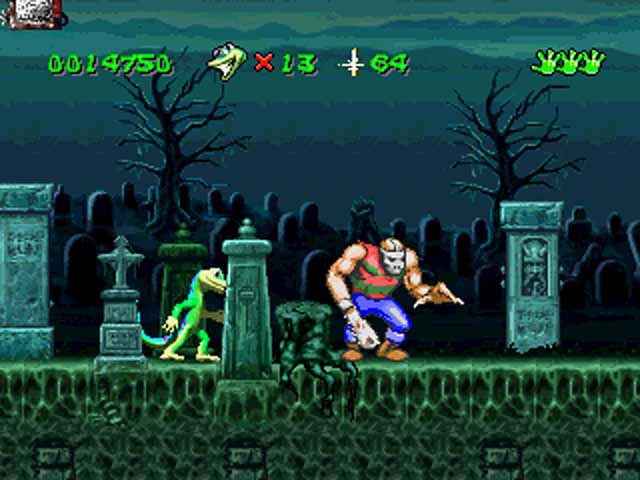 Stages tend to feel a little open, although in actuality they’re quite linear. Gex has an ability to stick to walls you see, and this can make you easily go up, down as well as left and right. Further variety comes about through power ups, which you can either whack with your tail to add to your health bar or eat (by using your extendable tongue) to access short term abilities, such as fireball breath or a super jump. Despite these interesting gameplay mechanics however, the game itself can occasionally feel a little generic – but some credit must go to developer Crystal Dynamics that the game remains playable throughout. Controls are solid, and there are rarely any moments where the game feels broken or unfair. 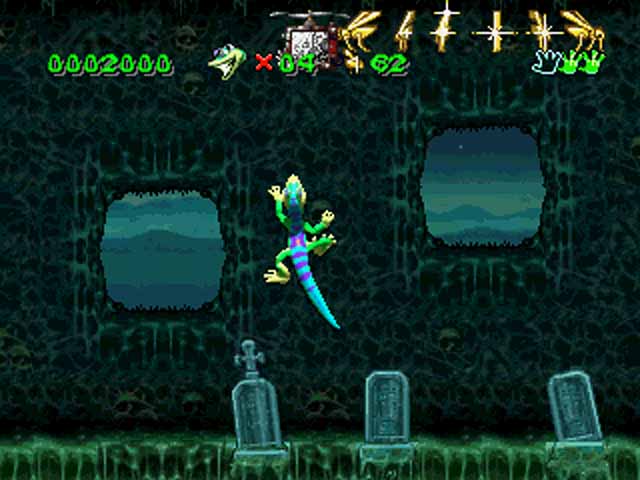 The only truly annoying design aspect is the password system – which requires you to collect a tape in every other level (and they’re usually hidden away) or beat an end of world boss. Whether the game is worth playing thought, simply comes down to whether you can stand Gex himself.  His wisecracks are just about acceptable – the first time your hear them. They’re repeated so much that they end up getting more than a little irksome though, and he seems to have to comment on something nearly every five seconds. Look past the painful attempts to make Gex a gecko with ‘attitude’ though, and this is a platformer that’s still worth a look.