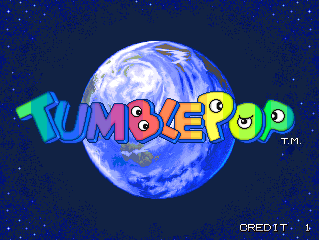 Back again for another round of forgotten gaming classics. This time, we take a look at another fairly obscure arcade game that was mentioned last time around, that being 1991’s TumblePop. TumblePop was made by Japanese developer/publisher Data East, who were one of the kings of the arcade’s heyday. Data East was responsible for such early arcade hits as Burger Time, Astro Fighter, Karate Champ, and Ring King. They also made later hits such as Karnov, Two Crude Dudes, Bad Dudes vs. Dragon Ninja, Heavy Barrel, Captain America and the Avengers, Kid Niki, Breakthru, Bloody Wolf, and the Magical Drop series. They were also a big name in the late 80s/early 90s home console market, producing such hits as Joe & Mac, Congo’s Caper, and High Seas Havoc. And of course, I’d be remiss if I didn’t mention their infamous (but decent) Street Fighter II ripoff, Fighter’s History, which became a short-lived series of it’s own.

Unlike the last entry, Avenging Spirit, TumblePop was more of your traditional arcade fare: light on story, big on high scores and just outright fun. The basic premise of the game is that you play a pair of “Ghost Buster” type characters, who use (get this) vacuum cleaner type gizmos to suck up ghosts, demons, aliens and other monsters. A concept that would, in some form, pop up again years later in Nintendo’s own Luigi’s Mansion. Once you suck up enemies, you can blast them back OUT of the vacuum thingy to use as projectiles against other enemies. And therein lies the core gameplay mechanic, and basic fun of Tumble Pop.

Similar to the Taito classic Bubble Bobble, when enemies are destroyed, they often leave behind goodies for you to collect, such as coins, etc. In fact, the game seems largely inspired by earlier hits like Bubble Bobble as well as Capcom’s Buster Bros, and the game takes the same classic arcade approach of the action being limited to little “Screens”, instead of the kinds of sprawling levels seen in the later side-scroller genre. Like those earlier games, it also features two player simultaneous co-op gameplay, which just adds to the pandemonium. Along with goodies from enemies, you also collect occasional letters that, as you can see in the picture above, eventually spell out “Tumbepop”, and when you get the full word, you are whisked off to a timed bonus stage where you can get even MORE high-score ensuring goodies, as well as extra lives.

The game plays out over 10 different areas, representing (mostly) real places on earth, such as New York, Moscow, Japan, Egypt, Australia, etc. In the final two areas (SPOILERS) the game sees you travel to Outer Space and finally The Moon. Each area features it’s own themed monsters, as well as typically one big boss fight at the end. And as you have seen in these pictures, there are some crazy bosses, like a giant octopus, a killer snowman, a giant clown robot, a flaming dragon, an enormous genie, etc. And if that weren’t enough, if you failed to defeat all the monsters in a given time, a Dracula-type dude will wander on screen and if he catches you, you lose a life. Major bummer. Totally bogus! But I digress.

As mentioned in the previous article, as coincidental Fate would have it, unfortunately the only platform that TumblePop was ever ported to, like Avenging Spirit before it, was the original Game Boy, in 1992. Again, awesome for Game Boy owners, too bad for anybody else. As again, this would have made an amazing NES game, or even SNES or Genesis game. I certainly would have loved to have rented or maybe even owned it on NES as a kid. The one big difference between the two however, in my personal experience, was that I actually got to PLAY the arcade version of TumblePop as it was long a mainstay of the local area skating rink. As a matter of fact, as a call back to an even earlier article, remember that buddy of mine Harold, whose favorite game EVER is M.C. Kids? Yup, well TumblePop was pretty much his favorite arcade game too. And wouldn’t you know it (unlike his modern taste in games), BOTH of these classics were actually fun! Damn you Harold!!

It should be mentioned that the Game Boy version of TumbePop differed slightly, in that it featured a “World Map” of sorts, where you could even exit areas if they were too hard and come back later, as well as an on-map Shop where you could use coins collected to buy upgrades. Pretty nifty all around. And, again like Avenging Spirit, the Game Boy version of TumblePop, as luck would have it, is available for download on the 3DS eShop. I would highly suggest giving both games a whirl, as they’re well worth it.

Well, that about wraps it up folks! Another fun game, faded from memory, but now resurrected through the power of….well, my bodacious writing! Go find yourself a copy of TumblePop, and suck away!

Longtime writer. Firebrand for the ages. Purveyor of archaic information. Lover of various things classic and old school. Minister of the Retro faith. Follow my mad quest at my official blog page, on Facebook, on Tumblr, and on Twitter, all under the "Retro Revelations" war-banner. There's no need to miss the past, because I'm bringing it back. You can see his work at - http://retrorevelations.blogspot.com/