If you want to play an updated NES version of Battletoads, then the Genesis version is the one for you. I feel that this version is a lot easier especially in the second level where you can rack up all the extra lives a lot easier and at a quicker rate. As many of you know, the NES version is brutal and will take you countless of tries to get pass the later levels. It gets to a point of frustration but not in the Genesis version, at least this one takes a lot less tries to get passed such levels. This game really feels a lot more polished and more fair in gameplay than the NES version. Of course, you will still have a tough time in the two player mode and you will probably be better off playing one player unless you have a buddy that’ll do the job just as good as you can.

So lets move on, the game is as fun as the other counterparts. You’ll enjoy the graphics and sounds of this one as the Genesis takes advantage of them. The gameplay will be challenging but it will keep you coming for more. 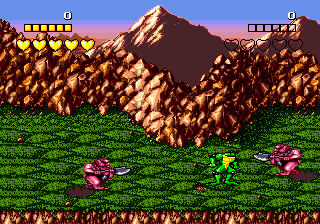 Well I highly recommend this title especially if you won’t give the NES version a chance. This one is the game not to miss and it’s mighty cheap on Ebay. Go Toads!