In 1990, cult-favorite developer Sunsoft published Batman on the 8-bit Nintendo Entertainment System (NES) console, a video game cartridge based on the original film as directed by Tim Burton with Michael Keaton in the titular role of the caped crusader. Little did Sunsoft know, perhaps, that they would be laying the foundation for what would be among the most prized legacies in license-game franchise history, and authoring the blueprint for what a successful high-quality license game should feel like. 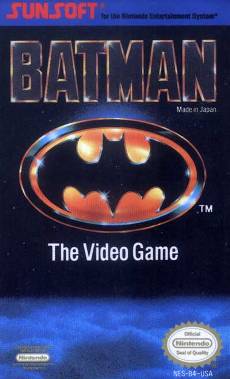 The controls are definitively sublime: The A button jumps, and the B button punches, as they should. However, the Dark Knight has a few further tricks up his sleeve: Not only can he crouch and jump at varying heights, along with altering his midair momentum, but he can wall-jump rather intuitively, adding a whole new dimension to the classic 8-bit platforming gameplay. Not only are his movement capabilities fleshed out well, but he has a trio of weapons at his disposal: A ‘batarang’ boomerang, a projectile missile that begins with a slow flight before rapidly speeding across the screen, and a powerful triple-shot firing option as well. Each of these items is accessible by toggling through by pressing the Start button, and each with their own respective inventory amount, of which Batman can increase by picking up certain items as he proceeds. 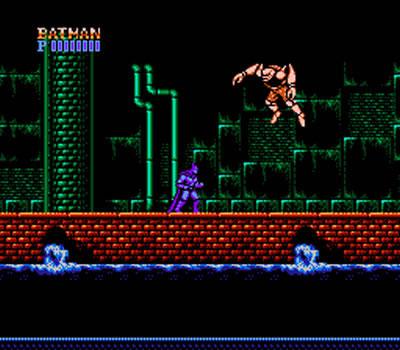 Another item he can find is health to boost his life meter, which at full strength allows him to take several hits before dying, although even Batman’s death is impressive, as he bursts into a flash of fire. Suffering damage does not incur knockback, and grants a brief moment of invulnerability. Mastering Batman’s skills in movement, melee combat, long-range weaponry, and inventory management will be key to success, as this Batman game boasts a challenging difficulty curve that will prove to be a worthy conquest for even a seasoned retro gamer.

The stages loosely follows the sets from the movie, as our hero must progress through Gotham, the AXIS Chemical Factory, some Laboratory Ruins, and other locales and sub-levels, before the inevitable final confrontation with his arch-nemesis the Joker. The boss fights after each stage are appropriate, and even innovative, as one finds Batman fighting an inanimate security system. 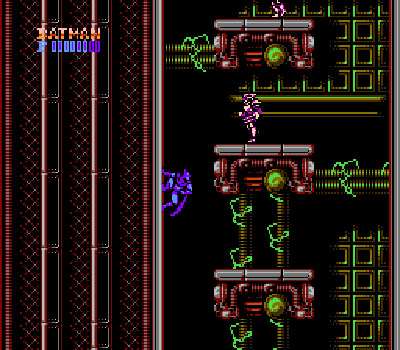 The platformer may have been an almost too-popular genre for the NES console, but Batman proves to be a shining example of how it can give the player a thorough, satisfactory experience, demanding honed reflexes, tactics, patience, and outright gaming prowess to complete, while still remaining as one of the best license video games of all time, even decades later. 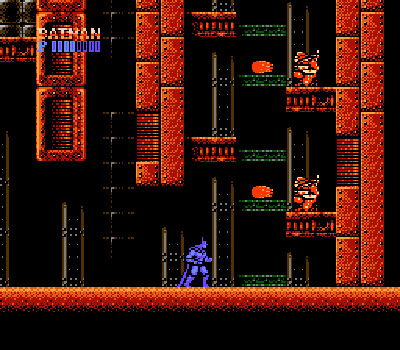 Sunsoft did not skimp on presentational strength. This is a fine-looking 8-bit NES video game. The characters are well-defined, distinctive, and varied, from the shock troops wielding flamethrowers to the robotic spike-armed floor guards and react to Batman’s presence. The cutscenes do justice to Batman’s bold, dark flavor, serving to more fully enrich the in-game plotline. But perhaps, in this humble reviewer’s opinion, the most noteworthy of Batman’s graphical qualities is its level design and background graphics. Even on the very first level, the use of detail in the backgrounds is exquisite, thoroughly pacing the rigors of the NES color palette toward establishing atmosphere, and the way the elements gradually fade into swooping blank swaths of black is stunning in its ingenuity and overall effect. This words may seem overly effusive, but rest assured: The praise is deserved, and those who play the NES rendition of Batman The Video Game are in for a memorable portrait of visceral action gaming. 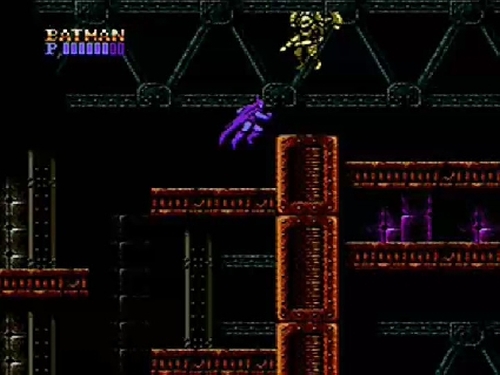 While some development teams and programmers were bewitched and obfuscated by the inherent difficulties of composing quality music for the Nintendo Entertainment System, Sunsoft must have had a very competent team indeed, because the themes present in Batman are among the most earwormy pieces of sound candy the console had to offer. The title screen tune thunders in with a deep taste of bass before adding a layer of melodic meat. The first level may be the most unforgettable for its music, with an intense track that is not only not a stretch to be described at nearly orchestral in its arrangement power, but apparently so fondly recognized that it is revisited in a later level to dramatic effect. The actual effects, in comparison, may even be a letdown, but pack enough punch to satisfy the proceedings as the buzzy chime of item-collecting bumps up against the brief flame-burst of defeated foes. 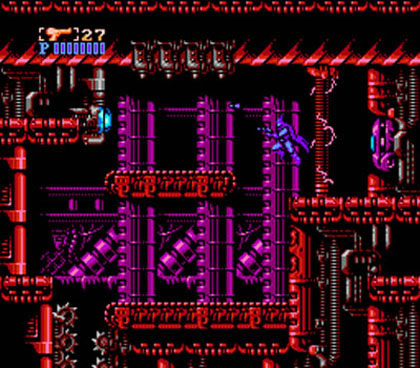 This is it: The definitive example of a good license game on the NES. Perhaps it is not the only one, or even the very best, but it set the standard, standing out amidst the morass of sub-standard cartridges in the sea of pre-1990 NES games being made. Maybe it was mostly due to its vast distribution and resulting commonality, but this is among the most beloved NES video games, with countless gamers pleasantly recollecting this as among their favorites.

The wall-jumping mechanic may have been the greatest innovation, with the second-level automaton boss being a notable mention as well. The item-toggling system is an interesting touch, but maybe not done as well as it could have been, although it certainly delivered results in real time. Then again, hardcore purists would balk at the concept of Batman carrying such guns anyway.

Some gamers, even retro fans, point to Batman as among the pioneering carts that helped define the term “Nintendo Hard,” supposedly representing an era when, since the limited-memory cartridges could not hold a hugely lengthy game, clever developers instead had to rely on steep difficulty levels to properly give gamers a heart replay value, as kids and hobbyists everywhere repeatedly tried to beat the game. While Batman may be tough, it is defensibly so, with the possible exception of the climactic Joker fight, in which the ultimate boss not only packs an enormous pistol but can inexplicably wield lightning bolts as well.

Whether nitpicked for its theoretical flaws, worked over as a title for hardcore fans only, or unappreciated as merely another example of the inundated field of NES platformers, one basic truth strikes at the core of the issue: Batman is a good game. The detective punches four stars out of five to earn its rightful place in the Nintendo pantheon.

Eric Bailey is a retro gamer on a crazy quest to write a quality review for every single American-released NES video game over at NintendoLegend.com.