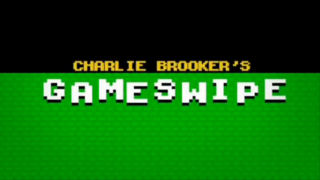 For those of us on this side of the pond you can learn more about Gameswipe here.

Charlie Brooker used to review games, and in his BBC4 programme Gameswipe (part of the BBC’s Electric Revolution season) he took his usual acerbic and satirical view at the games industry – and in particular how the media has represented games over the years. And while it was good, there were a few things that could have been better.

Let’s start off with the good things. It was great to see the genre definitions with their silly mimes, and the Consolevania segment dealing with retro games (complete with a glimpse of Jeff Minter’s classic Hover Bovver and the Mario imitating Great Giana Sisters). It was also good to see footage from Micro Live, which represents some of the BBC’s best content dealing with video games. But since that is over twenty years old, it does show one of the central tenets of Gameswipe – that the mainstream media does not take gaming seriously.

The Screenwipe and Newswipe programmes made good use of guests to provide short segments of the show, and Gameswipe followed that trend with some interesting names. Dara O’Brian described his ineptitude at Gears of War and Rock Band, Graham Linehan bemoaned the quality of writing in games and Rebecca Hayes from The Escapist appeared with her singing review of Madworld.

The recreation of Charlie as an Xbox avatar was also cleverly handled, and in particular the sequence showing him flying in a Super Mario Galaxy style. And yet it felt very hollow (and shallow) when the show presented fake footage of a “neighbourhood simulation” game. The title sequence was superb however, a clever combination of a retro-sounding version of the Screenwipe theme tune and pixellated visuals culminating in the descending boot inspired by Jet Set Willy (itself inspired by Monty Python).

For me, the worst sequence was the piece on games that caused outrage. While it gained brownie points for mentioning Turbo Esprit as an inspiration for Grand Theft Auto, it didn’t push home the point adequately. Many of the scandals, such as Night Trap, have been fabricated or exaggerated. It should have highlighted the fact that games have voluntarily had age ratings for many years, and it was irresponsible parenting that let children play unsuitable material. The selection of barely articulate vox pops undermined the message too. Archive footage of Gamesmaster and Games World was shoehorned in with little appreciation for what worked in those shows. The fact that we still lack a regular show dealing with gaming on a mainstream channel could have been hammered home.

There is no doubt I am sat squarely in the target market of such a show, as a fan of Brooker’s writing, a fan of his previous series and a gamer. But paradoxically, because it did exactly what I was expecting – a review of Wolfenstein with strong language, the self-deprecating humour about gamers being losers – it left me feeling slightly disappointed at the missed opportunity to go beyond the obvious.

So, as a one-off Gameswipe managed to hit some targets and miss others. Could it be commissioned for a full series? Based on the overnight ratings of 361,000 – higher than for any individual episode of Brooker’s previous Wipes – people were watching. There is scope there for a series, but ultimately it would need a forward-thinking editor to do so.

Cryptic Studio Has Moved On But Have Their Games?: Star Trek Edition