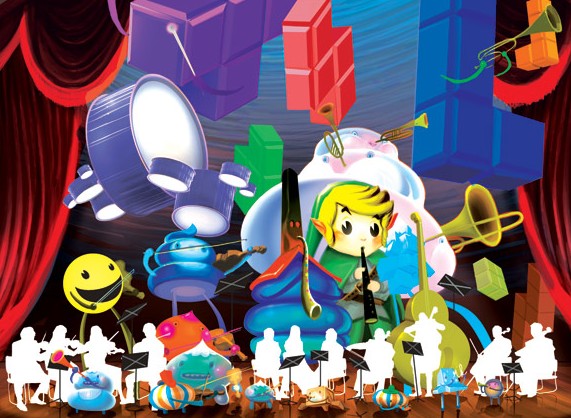 There are quite a few iconic tunes from videos games that if heard one would easily be able to identify them. Some of these songs immediately conjure up visions of the game while others may stir up a memory surrounding an event centered around gaming. However, it does one thing is certain and that is music has had a great impact in gaming.

A theme from a game like Bubble Bobble may just identify the game, it was a repetitive theme as most early game music was, but it stuck with us because the game had over 100 levels. On the other hand the theme from Zelda is more likely to bring up a specific moment in one of the games like when you first went to the dark world or when you collected all the pieces from the Tri-force. Sometimes a song can remind you of an event. Say the theme from Double Dragon, perhaps it reminds you of hanging at the local arcade with friends or the theme from Frogger reminds you of the pizza shop near your school.

As music became a larger part of gaming individual songs became fan favorites like Celes’s Theme from Final Fantasy VI or the Kelethin music from the original Everquest. Like in movies the right kind of music could set the stage for a level, a boss fight or a cut scene and if done correctly could touch a cord with fans.

Video game music became so popular fans begged for soundtracks and from there people made their own versions of their favorite songs and the remixers were born. Almost every gamer has a tune in their head from a video game (or several) that will take them back to a happier time. Some of us even take our video game music with us in our media players and cars.

Even as video games have become more advance the music still remains and important part. It doesn’t matter if it is computer generated or performed by an orchestra, the key is it fits the moment and is memorable.

This week we asked our panel:

Do you have a favorite song or theme from a video game if so what is it and why do you like it?

“Still Alive” from Mirrors Edge was very catchy and attached to a really catchy game as well. But “Still Alive” from Portal was a kind of phenomenon and I’d say must go in the Hall of  Game Music Fame. I knew that song was something special when I went to a game conference and saw an auditorium of gamers singing along to the song that was being played on a 50 foot screen in Rock Band.
I’m not sure I could articulate why I (and millions of others) love that song so much but its tied somewhere to the whole experience of the game and how the song perfectly complements what I just survived.

The first time I heard the intro theme for Civilization IV as the world turned in the background, I almost cried… (ok, I did cry, but don’t tell anyone). Having music that perfectly fits the game’s atmosphere is actually a rare thing, but when it does happen it can really seal the deal on immersing oneself in the game.

On the flipside, nothing really beats the soundtrack to Redneck Rampage…

“Sweet Emotion” from Aerosmith: Revolution X.  Because music IS the weapon!

The only one that comes to mind is the Super Mario Bros. music.

Overall my favorite soundtrack is Zelda II: The Adventure of Link. As far as favorite individual song though, that would have to be the battle music from Final Fantasy IV / II U.S. Why? I love the bass line! In fact, the bass line from that song is what inspired me to start playing the bass, which is now my primary instrument.

I’m kind of cheating on this one.  I like C64 Pool of Radiance but I wrote it.  🙂  It’s in the style of Wagner.  You can’t go wrong with 8 bit Mario, it’s too classic.  I like the way retro influenced bands cover it too.

Purely because of decades of Pavlov-type conditioning, I’d have to say the ‘Puzzle Solved Noise’ from Zelda… yes I’m aware it’s not a whole song…

So what about you, what’s your song?

A Call to Restore FMV Games