It’s generally accepted that, outside of the arcades at least, shoot ’em ups have always been the province of consoles. There were a few good examples on the Spectrum, Amstrad, Commodore 64, Atari 400 & 800, etc, and the arrival of the more powerful 16-bit machines should’ve heralded even more, but they never really came, despite the genre’s enduring popularity. Few could argue with either the quantity or quality of offerings on the likes of the NES, PC Engine, or MegaDrive, and I myself, in my days as a die-hard Sega fanboy, used to champion the latter console as Lord of Shmups. Of all the computers, however, it was arguably the Commodore Amiga that fared the best with its shmups with not only some decent arcade conversions but also a good few original games too. In fact, I believe all the games in this Top Five were Amiga exclusives! Here they are:

Games-Related Top Fives Disclaimer: Unlike my usual Games-Related Top Five Disclaimers, which cover my arse by mentioning that the list was compiled only from games that I already know and love, and that any great games not featured may well not yet have been played by me, this one is different, mainly because I never was a big Amiga gamer and probably hadn’t even played five shmups on it! Therefore I had to research this list thoroughly by playing each game via emulation. However, to finally get to the actual ‘disclaimer’ part, there was a few supposedly great games that I wasn’t able to play (because they didn’t work). Therefore, assuming I ever am able to play them, I’ll make a revised list accordingly. Phew! 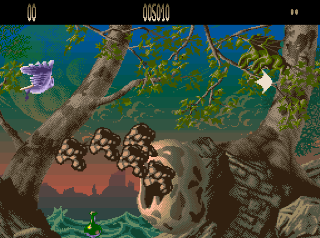 Regarded as something of a tart by many Amiga owners, it’s easy to see where Agony gets this reputation – the presentation and graphics really are something else and leave the gameplay with a lot to live up to. It’s certainly a pretty original concept, with you in control of an owl which uses echo-location to take down the masses of evil creatures spread across the six worlds that lie between it and the ‘Cosmic Power’ that it seeks. The intro/loading screens feature beautiful artwork and music, and in-game action is similarly gorgeous. This certainly isn’t the most playable shmup I’ve played, even just on the Amiga, but at the same time its reputation seems a little unfair. Besides its stunning aesthetics Agony is a unique and enjoyable horizontal-scroller which would’ve blown my socks off if I’d discovered it when it originally came out! 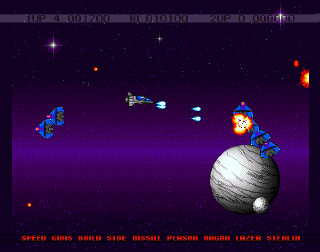 Released to much fanfare by Team 17 during their superb run on the Amiga, this is another one with amazing aesthetics. It’s far less original and moody than Agony, being a somewhat generic game set in space and across all the usual landscapes, but it nonetheless comes closer than any other Amiga shmup to duplicating the arcade/console style of shooter. The hi-res graphics are beautifully drawn and feature some amazing effects, and the sound is equally impressive with some great music, effects, and speech that MegaDrive owners (myself included) would’ve killed for. In fact, the only thing stopping this from taking top-spot is its insane difficulty level! Even at the peak of my skills I couldn’t get anywhere near the end of this otherwise ultra-playable game. Responding to pleas from gamers, Team 17 did release a Special Edition of the game which toned down the difficulty though, and if I get around to buying that version perhaps it will feature higher in the list next time. 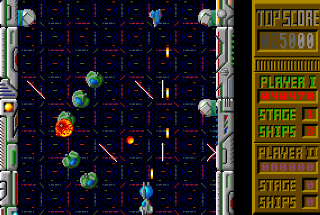 This is one I had absolutely no knowledge of prior to looking into this Top Five but I’m very glad I found it, for it’s one of the most addictive little blasters I’ve played! Initially seeming to be a very basic and fairly uninspiring game, it soon reveals itself to be a tough but rewarding, not to mention highly enjoyable shooter. Its creators had clearly been sniffing around the back-catalogue of Irem though, as this is basically a vertically-scrolling take on R-Type! Your little ship can be equipped with a Force-style attachment, the weapons are a copy of those from Irem’s classic, the power-up capsules themselves look the same, and there’s even a circle of guns! Some of the the ‘homages’ are far from subtle, but it’s hard to complain when it’s as well done as this. 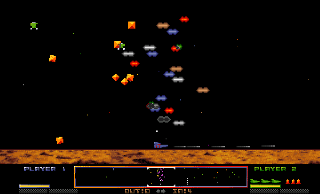 Here’s another one that takes its inspiration from elsewhere, this time from both Defender and Dropzone, the latter of which is itself a Defender clone! The object is to rescue at least one of the eight pods drifting along the floor of each stage and drop them at a portal while pesky Landers try to steal them. Millions of other enemies also swarm each stage and all must be eliminated. Datastorm is a tough, fast-paced game that rewards practise and is a fantastic score-attack game! This is one of the few Amiga games I really have spent a lot of time playing, first on my friend’s Amiga, then on my own when I finally got one, and now again via emulation, and it’s never gotten boring. Fantastic music and sound effects too. 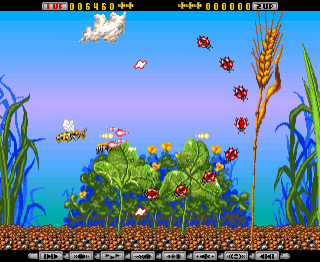 For some reason I never knew about this one when it came out but I’ve heard about it repeatedly over the intervening years and know how highly regarded it is amongst the Amiga fraternity. Having finally played it for this feature, I can see why! Much like Agony, it’s a unusual premise for a shoot ’em up. Here, you take control of a magical honeybee (although it looks more like a wasp to me) and must battle against other insects, garden beasties, and all manner of others monstrous adversaries across five stages. The game has nicely detailed, colourful stages and great music, but it’s the finely-honed gameplay that is most responsible for Apidya’s grand reputation. The stages and weapons are nicely designed and it’s a real pleasure playing through this interesting and unique shooter.

What is your favorite flash game?