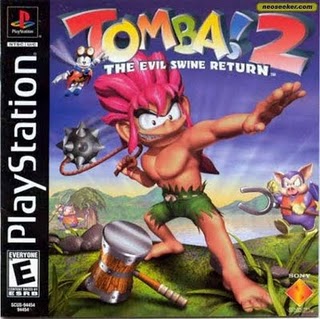 Tomba 2 for the PSX redefined a golden era of platformers that were though to be dead but weren’t! This game has some of the most innovative gameplay around for the PSX. Anyways, the game starts you out as caveman of some sort that goes on adventures like saving a crab for once…lol….it does contain some great graphics and interesting concepts. The game is just so damn fun and hard to find. I for once have only found one copy of it and has been loose which is still worth a pretty penny(around 35 US dollars loose according to my friend that owns a gaming store).

This dude’s hair looks crazy being all pink and all but it sort of reminds me of the good old Joe & Mac games. Those were some classic fun games for sure. The gameplay pretty much goes from 2D to 3D at times. You can call it 2.5D if you please since it switches views at times. In the end, you are always following one road which keeps to its platforming genre.

Alright, I don’t want to say too much about this game to give stuff away but I do suggest picking a copy up if you ever see it in the while. I don’t recommend you buy it off ebay since it goes for a lot of money and we want to keep our costs down hehehhe…. You can also pick up part 1 of the Tomba series which is as good as this one.