Serve the Emperor! Join the Imperial Navy and save the Galaxy!

The back cover blurb of one of 1994’s best PC games began with these words, and what an amazing game it was.  Star Wars TIE Fighter was the sequel to the amazing Star Wars: X-Wing Space Combat Simulator, and it gave players the chance to play for the other team:  The Empire. 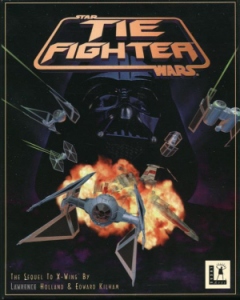 I loved the setup to this game: the Rebellion are called “terrorists” and a threat to peace and order in the galaxy.  But the game isn’t just about taking on the Rebellion; your rookie Imperial Pilot is tasked with wiping out pirates, ferreting out corruption in the Imperial Navy, and disposing of other criminal elements.  In all, there are around 50 missions you get to embark on.

Not only could you play fly various missions for your commanding officer, you could also choose to enter into a secret service for the Emperor.  A shadowy member of the Emperor’s Inner Circle gives the player further objectives to fulfill.  These optional briefings add more information to what’s going on in the game as they reveal more and more of the plot.  You don’t need to complete them to finish the game, but they’re fun!

While John Williams’ original soundtrack plays in the background, the player gets to fly a variety of space craft, which include: TIE fighters, TIE bombers, TIE Interceptors, TIE Advanced, TIE Defender (awesome!), and assault gunboats.  Personages you interact with include Emperor Palpatine, Grand Admiral Thrawn, Grand Admiral Zaarin, and, of course, Darth Vader.  If you complete the game and save the Emperor you can expect a closing ceremony reminiscent of the one at the end of the original Star Wars movie, except this time it’s all in the Imperial motif. 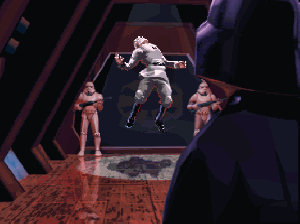 There was an expansion disk pack released for TIE Fighter called Defender of the Empire, which added a few more missions, but didn’t do much in advancing the storyline.  A second expansion pack called Enemies of the Empire was originally planned for an independent release, but ended up as an added bonus to the CD-ROM release of TIE Fighter, called – appropriately enough – Star Wars TIE Fighter Collector’s CD-ROM.  The CD version includes Defender of the Empire, and offers around 100 missions to fly.  This is retro gaming at its finest, so if you never played TIE Fighter, it’s time to suit up and restore order to the galaxy – your Emperor commands it!