It has come to my deeply shocked attention that despite the recent Gnome’s Lair reviews of both Blackwell Legacy and Blackwell Unbound, there are still gamers, adventure gamers even, that have yet to try a Blackwell game. How very odd. I mean, it’s not everyday a fully indie, retro-styled, well written and impeccably produced adventure gets made, is it? Of course not. And The Blackwell Convergence is the latest in the Blackwell series, which, as you should have already guessed or known, is an indie, retro-styled, well written and impeccably produced series of adventure games, with Convergence being the third installment.

Convergence, just like the Blackwell games before it and -hopefully- the Blackwell games that will follow, is all about getting the restless dead (in their ghostly form) to actually rest. In New York. Interestingly, New York is as much a character as any of the protagonist duo: Rosa the psychic and Joey the 30s ghost. 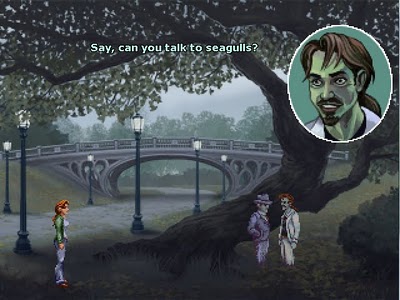 Now, point-and-clickers that have already enjoyed the previous games in the series, will definitely have to also play this installment, as it feels bigger and more lush than ever, while sporting the best graphics in the series yet and a truly fascinating plot. As for the characters animated portraits, well, they make a welcome return, as does the excellent voice-acting and writing. Oh, and it’s got horror bits in it too.

Newcomers to the series -the genre, even- on the other hand will appreciate the built-in tutorial and the fact that no previous Blackwell experience is required to fully enjoy the delights of Convergence. Besides, its puzzles are very simple and generally enjoyable, and the game is relatively short, clocking in at roughly 5 hours.

Verdict: Oh, come on. You must have guessed that. Blackwell Convergence really is a great adventure game.

Independent Adventure Games for the masses

Call of Cthulhu: The Wasted Land