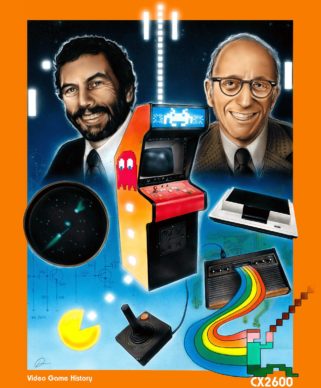 To say the film is thorough would be an understatement although the movie mainly focuses on arcade and console game development. Although I love this film a lot, I can criticize that it barely touches on what was going on in the home computer field, which although Nintendo saved the console gaming market (probably what World 1-2 will be about), home computers also saved video games and people’s interest in electronics and computers with great machines such as the Commodore 64, Atari computers, and later Commodore Amiga (much before IBM clones and DOS become popular).

END_OF_DOCUMENT_TOKEN_TO_BE_REPLACED

The film industry is always looking for the next big thing. Film execs gain the rights to make movies based on novels, children’s stories, and comic books. One source that on the surface seems to have incredible synergy with Hollywood is the video game industry. Games have already benefited from using Hollywood-style production values, including professional actors and actresses for both voice and live parts. You’d think that both being visual mediums would lead to incredible movies being made based upon video game properties.

END_OF_DOCUMENT_TOKEN_TO_BE_REPLACED

Most games are made with very iconographic heroes and villains. You don’t have to worry about plot or story as much, and can focus on the core gameplay. Nearly everything is black and white. The Heroes are universally good, and the Villains are the purest of evil. As we get older, we learn life is really just shades of grey (or from “a certain point of view”).

END_OF_DOCUMENT_TOKEN_TO_BE_REPLACED

Thanks to the Wii, brining you wastes of time since 2006, you can now Yoga your way to the backwards sun pretzel position in just a few short weeks. This hot new program will teach you how to get your mind and body in sync preparing you for long nights of passion. Keggle’s add-on pack not included.

END_OF_DOCUMENT_TOKEN_TO_BE_REPLACED

Ha. The stories I have to share involve other Square employees, cute Japanese girls at various locations in Tokyo at night. They are not fit for public consumption… so I’ll let you guys imagine some of the trouble we got into.

END_OF_DOCUMENT_TOKEN_TO_BE_REPLACED

Although the sequel to TRON, Tron Legacy is coming out near the holidays this 2010, in 2003 a really great FPS game came out on computer by the name of Tron 2.0. See, I was never expecting anything like Tron Legacy to happen, especially since I read years ago that some people in Disney were bitter about having paid to get TRON made. However, Tron 2.0 was made and that was even better than TRON!