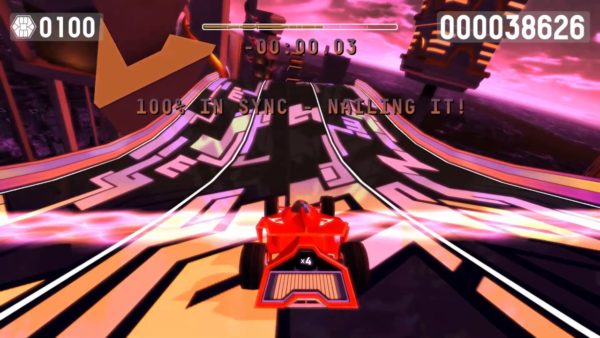 Riff Racer (Drive Any Track) is a game similar to Beat Hazard and Audiosurf that lets you play with your music. It creates a track based on a song from your music library.

In this video I race to Hocus Pocus by Focus. It is a 3 star difficulty track. I was using the car Monaco.

END_OF_DOCUMENT_TOKEN_TO_BE_REPLACED

Riff Racer (Drive Any Track) is a game similar to Beat Hazard and Audiosurf that lets you play with your music. It creates a track based on a song from your music library.

END_OF_DOCUMENT_TOKEN_TO_BE_REPLACED

The graphics of SRC2 are tremendous. Jumping right into a game, I noticed the frame-rate is top notch and the backgrounds move fluidly. Didn’t really notice any slowdowns, shudders, or jumps. I was a little worried how it look, but pleasantly surprised. The weather effects look nice, and handle accordingly. Being a hater of the brake petal, I learned quickly that I’ll have to adapt to the elements (ice, gravel).
Now that’s out of the way, let’s talk about the options:

END_OF_DOCUMENT_TOKEN_TO_BE_REPLACED

The Black Car was the Holy Grail of the game. After you defeated the other modes and cars, you were able to take on the evil one. If you could defeat it, you would own it. Namco’s version of The Crossroads. One of the most difficult ‘bosses’ I ever faced, the only way to win was to run a perfect race…meaning if you scraped a wall, or skidded too much on a turn, the sumbitch would pass you and you’d never catch up. I put a lot of blood, sweat, and tears into that challenge, and still fondly remember the day of victory. With the powerful engine and control of The Black Car, you could improve your times even more.

END_OF_DOCUMENT_TOKEN_TO_BE_REPLACED

From the screenshots this game probably looks awesome, and it is pretty unique in the way that it moves. Unlike similar games where you simply steer the car around the track, here you steer the track around the car! It’s an interesting approach which kind of reminds me of F-Zero on the SNES (although non-3D, obviously), and can take some getting used to. However, Drift Out is a very tough game and it’s not just because of this! The courses look nice, featuring the type of backdrops you might expect to see – wooded areas, dusty tracks, desert areas, shallow water, mud, etc, but there are also a lot of roadside objects and it’s very easy to become stuck by one of these which pretty much ruins any chance of doing well in a race, and it’s this which is Drift Out’s main problem.

END_OF_DOCUMENT_TOKEN_TO_BE_REPLACED

There’s quite a lot to F-Zero X for an arcade-style racer but it would all be for nothing if the widely-criticised graphics kept gamers away. Personally though, I can’t see what all fuss is about! I asked earlier if Nintendo’s decision to sacrifice graphical detail for increased smoothness and speed was worth the risk. Well, in my opinion it was an excellent decision. The backgrounds may well be somewhat sparse but they are colourful and varied but that’s not hugely relevant anyway

A new name and a new way of doing our weekly report on games coming out the following week. With so many games out there the fact is some will be worth the cash and some will not be. Beyond that some games may be worth picking over the others and so we have come up with a dollar sign rating system. One $ means it can wait until it’s in the bargain bin and five $’s means you should be waiting in line to purchase it.

END_OF_DOCUMENT_TOKEN_TO_BE_REPLACED

EA and the development team wanted to bring the NFS franchise back from the dead. They admitted that the last game was just not what it should be and blamed it on a number of things including how long they were allowed to work on it. Now with more time the team has put together a game they hope will restore NFS to its former glory.

END_OF_DOCUMENT_TOKEN_TO_BE_REPLACED

Need for Speed is one of the first 3D Racing games and even today this game makes a lot of fun. The sequel titles runs on different platforms like PocketPC´s and Playstation what makes this game a very cool game.

END_OF_DOCUMENT_TOKEN_TO_BE_REPLACED

Funny, I didn’t know F-Zero could help you lose weight I’ll have to remember that.

END_OF_DOCUMENT_TOKEN_TO_BE_REPLACED

I first plated TD2 on my cousins Amiga which he had connected to his stereo system so it sounded even better. What was funny was a few months later I heard the intro on a 386 system and almost fell over laughing.

END_OF_DOCUMENT_TOKEN_TO_BE_REPLACED

The game that changed the genre, revolutionized it & was years ahead of its time… The game that many loved and still love to this day… Ladies and Gentlemen, I give you… Stunts!

NFS was classic racing and now Electronic Arts are working on releasing Need for Speed World which will be an MMO racer based on the NFS series. NFSW will feature single and co-op racing teams and something they are calling “epic online pursuits”