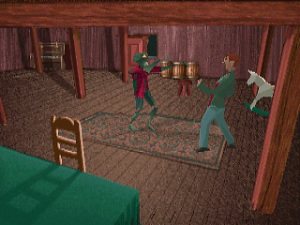 Alone in the Dark is a game that dabbles in the Cthulhu mythos. The horrific situations found within the game display their Cthulhulian influence, and even the mansion is discovered to be actually named after Shub-Niggurath, H.P. Lovecraft’s The Black Goat of the Woods with a Thousand Young. However, the creatures that Edward and Emily encounter are more standard fare (and are a mixed bag when it comes to frightening appearance), and do not possess the mind and world-shattering power of Lovecraftian monsters.

END_OF_DOCUMENT_TOKEN_TO_BE_REPLACED

By far the best aspect of this game was the two player mode. There were surprisingly few Amiga games that you could play over a link cable, but these games were among my favourites, and most of them are (or will be) on this list (I’ve already covered one of them – Stunt Car Racer).

END_OF_DOCUMENT_TOKEN_TO_BE_REPLACED

I made a custom world, medium map, played at prince level and stupidly selected the raging hordes for barbarians, I played against 4 other civilizations. I selected to be the Romans myself, so I could employ the unfunny name of ‘Naughtius Jamesius’, some things never change. The game started well until I realised I’d completely forgotten how to play, tactics and strategies were absent from the beginning and soon the 4 other civilizations were ploughing ahead with warfare, advancing technology and building wonders of the world. My only saving grace was the fact my people seemed to like me, therefore I could address my fellow leaders from a throne instead of a rock.

END_OF_DOCUMENT_TOKEN_TO_BE_REPLACED

Sid Meier’s Pirates! was not only popular amongst gamers, it also performed well in the eyes of the gaming press. It was awarded “Action Game of the Year” by Computer Gaming World, and also the Origin Award for “Best Fantasy or Science Fiction Computer Game of 1987”. The game also ranked at #18 in the Computer Gaming World’s 150 Best Games of All Time. Clearly, this game has remained in the gaming public’s eye for a reason, making Sid Meier’s Pirates! a worthy addition to anyone’s game collection.

END_OF_DOCUMENT_TOKEN_TO_BE_REPLACED

Players started with a single settler (a covered wagon) at the dawn of civilization, chose a location to found their first city, and from that built an empire as the game timeline progressed to the Space Age. Sometimes you’d find another computer player right next door, and either had to keep the peace with non-stop diplomacy, or – more times than not – send in the troops to crush them like the insects they truly were. Up to six other civilizations were out there to discover, and they all had to be dealt with, one way or another (either the Americans, Aztecs, Babylonians, Chinese, Egyptians, English, French, Germans, Greeks, Indians, Mongolians, Romans, Russians, or Zulus.)

END_OF_DOCUMENT_TOKEN_TO_BE_REPLACED

On a serious note, much during my internet down time I got to read the Master of Orion 2 manual A LOT and it made me really sad that they no longer make 200 page user manuals like that that were actually worth reading and it also made me really sad that Microprose (probably my favorite game company) has been dead for a long time. They sure don’t make them like that anymore! Klackons FTW!

The grand daddy of Magic meets Civilization games (literally) is finally available on Good Old Games for $5.99. This game had many improvements over the original Civilization 1, that we now see in modern games, and the later sequels of Civilization.

END_OF_DOCUMENT_TOKEN_TO_BE_REPLACED

I remember very well when I tried to run Carmageddon 1 on my AMD 486 DX-4 100 Mhz and the game was a slide-show. Quickly after that I jumped to my AMD K6-2 266 Mhz with 128 MB of RAM and a Diamond Stealth 2000 video card tied to a Creative 3dfx Voodoo 2 with 4 MB of RAM. I got addicted to Glide games quickly… Thanks to my gaming I got a lot of orders for gaming computers which paid for my college and taught me more about the real business world than many classes I took and books I read ever were able to show me.

The X-COM games are the best tactical combat games where you take on aliens with great AIs. You can get all 5 games for $2 total through Steam.

END_OF_DOCUMENT_TOKEN_TO_BE_REPLACED

The game consists of you taking turns (non-simultaneous) with your rivals, managing your planets’ development, research directions (allows multiple research projects at a time vs 1 in later space empire games, which I think that’s unrealistic), your spy projects (they can sabotage, steal tech, be sleepers), your diplomacy (make alliances, actually never do almost, and trade tech, start trade deals, threaten and demand tribute, end and start wars), and conquer conquer conquer. You can orbitally bombard planets to dust basically or be smart about your killing (because later the weapons can literally scorch all populations out of existence, even one ship) and enslave, I mean welcome the conquered population to your empire.