The pc gaming genre I appreciate the most has always been the Adventure Game. I simply can’t stress enough, how much I enjoyed the vintage classics of Lucasarts and Sierra. How carelessly I danced around them wearing only a green wig and chanting ecstatically ‘Oi, oi, that’s life. Ei, ei, I love adventures’ etc. How I gloriously spent my money on them. How I desperately searched for walkthroughs. How many of them I actually missed. Pah. Those were the days.

On the other hand, I can neither stress how disappointed in Lucasarts I currently am. Not only have they dumped adventures, but also rejected any kind of creativity and/or originality by producing a torrent of mediocre and/or lackluster Star Wars action and(/or) ‘strategy’ games. Star Wars Battlefront was a prime example of this trend. A desperate clone of Battlefield 1942 with Star Wars models and textures, featuring awful gameplay.

It is not an original concept. It is a Lucasarts product. It is a Star Wars game. It’s not an adventure. It is a First Person Shooter with a strong multiplayer aspect. I honestly enjoyed it.

SWBFII is such an improvement over its predecessor it totally surprised me and reminded me how fond of Star Wars games (TIE Fighter is what I am actually referring to) I once used to be. There are lots of excellent maps, vastly improved game mechanics, four different factions, many weapons and classes to choose from, playable characters (Darth Vader and co.) that can be used in multiplayer battles, a decent single player campaign, driveable vehicles and even a small but interesting strategic mode called Galactic Conquest (unfortunately only for the single player mode). By far though, the most interesting new feature is the inclusion of space battles. X-Wings, B-Wings, Y-Wings, TIE Fighters and the rest are all there in a highly enjoyable space flight sim in the style of X-Wing versus TIE Fighter. You can even land inside enemy motherships and fight for tyranny or freedom on foot. You can even play capture the flag in space! Joy. Lots and lots of hours of joy actually, since this is a game that really has dozens of hours worth of gameplay to offer. 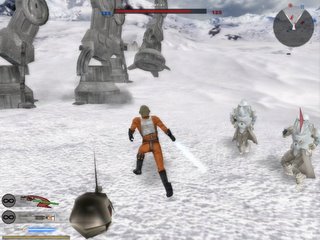 Obviously and unfortunately all is not perfect. The 3d engine seems a bit dated, a lack of overall polish is evident, there are some minor bot A.I. problems, no in-mission save points in the campaign and you get to play Princess Leia. On the multiplayer front you wont have any trouble finding people to play against, but you will have lag trouble in some of the larger maps.
And it definitely isn’t the most original or artistic game I have ever seen…