Table Top Games
March 16, 2011November 18, 2013 Konstantinos Dimopoulos 1 Comment board game reviews, board games, games workshop, genestealers, sci-fi, Space hulk, space hulk 2nd edition, space hulk review, space marine terminators, the inverted paradox, warhammer 40k
Space Hulk 2nd edition is apparently the 2nd edition of the 1st edition Space Hulk, which was published by the massive miniature making 500lb gorilla, usually referred to as Games Workshop. Thus, the setting of the game is none other than the dark, sci-fi and quite gothic 41st millennium. A time of war, theocracy, aliens and incomprehensible gods, war, famine, war preparations, battles, war and 80s music. And as war seems to feature quite heavily in the imagined year 40,000, a war inspired game shouldn’’t come as a surprise to anyone. The fact that humanity of the distant future is struggling under the boot of a rotting vegetable-Emperor, is quite irrelevant to Space Hulk 2nd edition being a war-themed board game and not a wargame. The Alien, Aliens etc craze that raged throughout the late 70s and 80s should explain the overall feeling/aesthetics of the board game, that are glorified in the following picture (directly scanned from the rulebook): 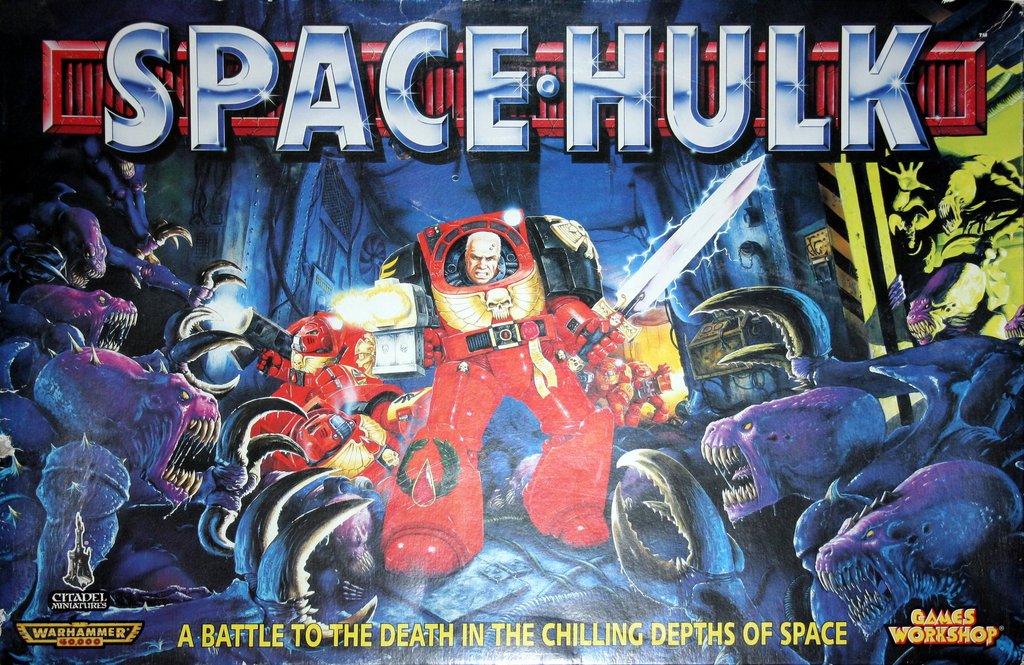 Silliness aside, the Warhammer 40000 universe, Space Hulk‘s setting, is a very rich in detail and well-portrayed world. An unholy bastard of a fantasy and sci-fi setting it may be, but also one of the better gaming worlds around. Space Hulk 2nd edition (Space Hulk henceforth) is accordingly one of the better board games around. Perhaps the best I’’ve ever played, and one I can’’t recommend enough. It might be difficult to track, but at least it’s easier to find than the really obscure first edition, and it will not cost you a fortune. When it was released, some 10 years ago, it was actually great value for money. You bought an -almost- huge box that contained:

Space Hulk‘’s game mechanics are rather simple, but extremely atmospheric and varied (that’’s what a 52 page long mission book is good for). Each player (in this two-player game) controls either the tough-as-nails and hip as anything from the 80s Space Marine Terminators, or the Giger-esque, fast and numerous Genestealers. After sides are picked, the players battle it out using the missions (and dice and miniatures) provided, over the modular cardboard terrain, that represents the narrow corridors of an ancient and derelict spaceship. The rules are simple, simpler than the first editions’’ (no stopwatch, just actions/time units per turn for example), but really interesting and appropriate. For example: the Terminators player can’’t see the Genestealers models, but only blips on his radar, represented by small counters his opponent places and moves over the board. Each counter can stand for either one, more or even none of the aliens; this of course can only be revealed when the Space Marines establish eye contact with the blip. Pure genius and a prime example of how atmospheric Space Hulk is.

In typical board game review fashion let me also inform you, that each game (match?) lasts for about an hour. In not-so-typical fashion I’’ll let you know a small fact: Space Hulk has been successfully ported to video game format. Take a look here. This video game even had a PC and console FPS sequel. Fancy, that.

Oh, and concerning my grading of Space Hulk, I guess …