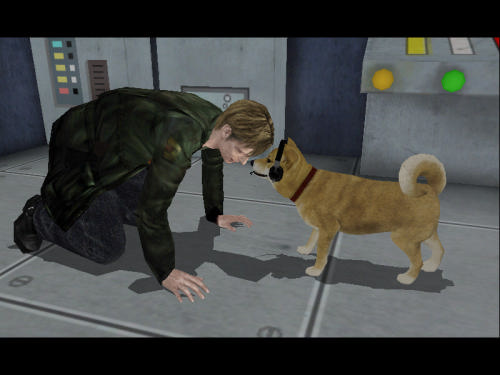 We all look forward to a good video game ending especially if the game had a good story and even more so if the game was hard to beat. In the survival horror game Silent Hill 2, there are a number of endings from best to good, too bad and just weird.

One of the weirdest endings in gaming is the Dog ending in Silent Hill 2 and to get this ending you have to be pretty hardcore because you need to beat the game a number of times or get the special rebirth ending.

To get the Dog ending:

1. Play the game all the way through at least once.

2. The second time, after you hook up with Maria, leave the park and go across the street into an empty parking lot with rather odd directions written on the doors.

4. Continue playing the game. In the Dark Side hotel, go to the Observation room and unlock it with the dog key.

5. Watch to discover the REAL mastermind behind it all! Also watch the credits to get some shots of James and Maria in an incomplete state of dress.

Check out GameFAQs for the specifics.

Here is the video:

The video is kind of an inside joke about a dog being behind events in some horror and sci-fi movies and television shows. By the way, the dog’s name is Mira and shows up in other Silent Hill games.

Commercial Wars: Best use of Sexy