Some classic games are more obscure than others, but are no less gaming gems than those games that inspired a multitude of sequels and imitators.  LOOM, a LucasFilm Games (the original name of LucasArts Entertainment) product, is one such game. 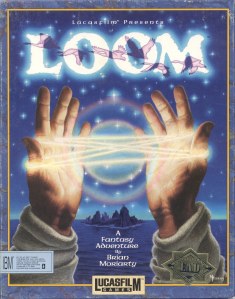 The front cover of the PC game, LOOM.

Released in 1990, LOOM contained a complex plot involving the fate of the universe resting upon the shoulders of one gifted man-child who is the last practitioner of an ancient guild of magicians called the Weavers.  The plot was so complex, in fact, that the preamble goes on for 30 minutes.  You read that right.  Originally a cassette tape was included so you could listen to the audio drama before starting the game. In the later CD-ROM version, the audio file was included on the CD. 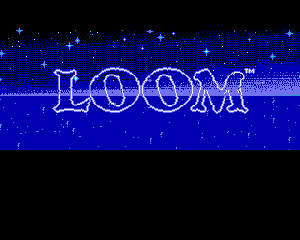 Bobbin Threadbare, the aforementioned only surviving member of the Guild of Weavers, must learn the ways of his craft.  This is not a simple adventure game; players don’t simply point and click their way to the grand finale.  In LOOM, magic is music and music is magic.  Bobbin can cast spells, but only as musical sequences on the C Major scale, and only if he possesses his “distaff,” a combination walking stick and wizard’s staff. Much of the game revolves around Bobbin seeking new “drafts” – the magical musical sequences – for him to use in his quest to save the universe from a “grey strand” that has unbalanced creation. 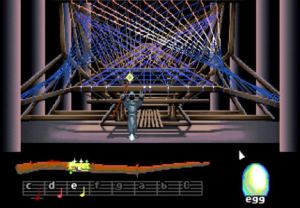 The Practice Mode of LOOM.

This game is pure delight from beginning to finish.  I loved the musical element and complete departure from the standard LucasArts adventure fare that this game provided.  The puzzles weren’t all that challenging, but different enough to be memorable.  The graphics were good for the time, also.  But most importantly, you couldn’t die or be returned to the beginning of the game for a simple mistake, making LOOM the first game to follow the LucasArts game design philosophy. 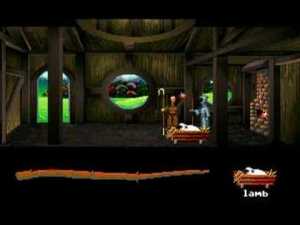 The game featured three challenge levels: Standard, Practice, and Expert, all relating to how the player learns the new scripts (spells) as they play.  With Practice mode, players could see the letters for the notes that were played. Standard mode takes away the letters on the notes, but instead the distaff glows when the notes are played.  Toughest of all – the Expert mode – removes both the glowing distaff and the musical letters, forcing the player to “play by ear” repeating the spells without the aid of any graphical representation. 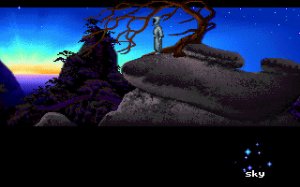 Although this is a definitely a one-of-a-kind game, its creator, Brian Moriarty, claims that it was originally intended to be the first of a trilogy.  The sequel, Forge, would have followed Rusty Nailbender of the Guild of Blacksmiths in his fight to free his home from the evil of Chaos.  Following that would have been The Fold, wherein Fleece Firmflanks (I’m not making this up!) must restore the all the guilds to their former glory.  Alas, the sequels were not meant to be, and LOOM remains the unique game that it is today.

This is a fabulous piece of retro gaming history, and one of the most sought-after PC games for most collectors.  If you have a chance to play it, do so.  You won’t regret your time spent saving the world!