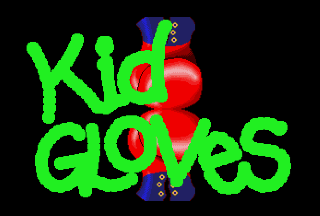 The poor old Amiga games industry was ravaged by pirated copies of games flooding the market and friends copying games for each other, it was this more than anything else that brought Commodore down in the mid-90’s. I’ve always tried to avoid that sort of business but when I belatedly got my Amiga, a friend gave me a box of discs with copied games on. Some didn’t work, others were pretty sucky, but of them all Kid Gloves is probably the one I played the most, guiltily of course, but seeing as it was later given away free by Amiga Power magazine I don’t feel so bad now! However, since I no longer have my Amiga and have developed a deep fear of using WinUAE, it’s been a long time since I played this game. It’s not looked upon too favourably by the Amiga community these days, I wonder if I’m about to destroy my happy memories of playing it too…

It’s a pretty simple game which sees you, as Kid, attempting to rescue your kidnapped girlfriend or some such nonsense. In order to do this he must make his way through the danger-filled, flick-screen world between him and his goal. Each of the screens are populated by various creatures and obstacles, such as pigs, goblin things, whirly blades, etc, which move in short, simple patterns, and some which remain still, such as fire. Contact with any of these objects means instant death for our hapless hero. Fortunately he can fight back, against the creatures at least, by firing coins at them, and there are other weapons available in the shop that appears periodically including Flames, Deathstar, and Megalaser. Many of the screens also contain other items like food (for points), keys (to pass barriers), money (to spend in shops), smart bombs (to clear screens of enemies), and ankh’s (for extra lives) and he can also use magic to turn the barriers into food too. 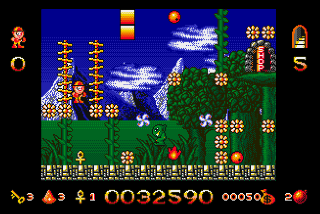 If there’s one thing about Kid Gloves which is still as true today as the first day I played it, it’s that it’s a pretty tough game! Some screens have objects such as blocks that fall down when you touch them to help you reach certain areas. Not only does this kind of thing kill you if you go so much as a pixel too close, but they can also have the opposite effect and prevent you from accessing an area. Most of the enemies in the game either walk backwards and forwards on platforms or bounce on the spot but there are also some that appear some time after you entered a screen. These ones can move freely around the screen and pursue you like Baron Von Blubba! Luckily, unlike the Bubble Bobble meany, these can be shot, but they always appear in the same place regardless of where you are on the screen which means they might appear right on top of you if you’re not careful! There are also some fireball things that move much more quickly around the screen if you hang around for too long, and these cannot be shot. However, leaving the screen then returning to it will reset everything to its original place, except the enemies which do not reappear. 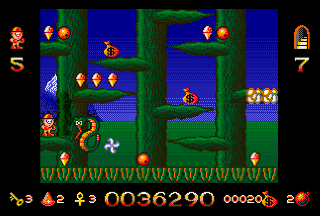 That’s pretty much the only problem with this game. I knew even back then that it was a simple game, looking more akin to a Public Domain game than a full-price release. The backgrounds and sprites look okay but are poorly animated and hardly push the Amiga to its limits. There is some nice sampled sound effects and speech though, and a pretty decent title-screen tune, but there’s no in-game music. None of this is really reason to dislike the game, it just has a few minor gameplay flaws that are so frustrating. The collision-detection is pretty shocking for one thing which obviously doesn’t help matters, and the controls can be really fiddly too – you try going up or down a ladder in a hurry! I never could get very far in Kid Gloves and that hasn’t changed since I started replaying it. Every time I think “right, I’ll get really far into it this time” it just ends up annoying me too much and I play something else. I don’t think it’s aged too badly, but it’s flaws are more apparent to me now. Ultimately it has a certain charm but this is a very average game that could’ve so much better with a few tweaks.