Hearts of Iron The Card Game Review by Honorabili

Anyways, back to the card game! The link for the game is the following http://hoitcg.com/hoi/index.php. You sign up for the game by using your existing Paradox Interactive (forum) account. If for some reason (and it happened to me with Firefox), the sign up button is not generating the site correctly for you, click here to sign up.

In the game you take the role of the ruler of either the USA, Germany, or USSR (Comintern). Each faction has its own benefits. The Germans are all about their heavy tanks (tougher to kill) and killing other units outright but also have the most expensive units to build. The USA is all about artillery and airpower but have lousy tanks and poor organization and leadership. The Russians are all about throwing waves of cheap infantry as cannon fodder at the enemy (think Enemy At The Gates) but have lousy airpower. Each of the three different factions have their own strengths and weaknesses.

The game is divided into different phases. In the first one, you draw up to three cards and if you don’t then you have infrastructure points which you can use to build factories. In this same phase, if you have enough of the right kind of factory you can use this time to build artillery, airplanes, infantry, tanks, or fortifications as well as learning new field strategies. In the next phase, alternating per turn, one of the players attacks first. The other player gets to pick which units will defend. If they cannot defend (basically because they don’t have enough infantry) then usually the other player gains a certain amount of victory points. The game ends when one of the player gets 7 victory points. Just so you have an idea, a game usually takes me at least an hour when I fight to the bitter end.

Units, like in many card games, counter each other and certain units are good at attacking in certain ways. Combat is divided into three phases: artillery, battle, and close combat. You have to attack or not attack based on what your strategy is. Sometimes not attacking will do more damage in a later phase of the combat but usually the combat gets really nasty and a lot of stuff dies. Sometimes you won’t be able to attack because one of your units got pinned or damaged or outright killed by an enemy unit. Be sure to read their cards carefully before committing to a certain death strategy!

I’m still learning the game myself so I recommend reading the strategy guide found here if my explanation doesn’t make much sense to you.

The game is for the most part pretty well balanced. The only part I found bullshit was when a bunch of German Panzers shot down some of my airplanes which they shouldn’t have been able to do unless they were specifically anti-air cannon tanks.

The game is free and if you play 7 games per week they give you a free booster of 1st edition (regular) cards. Like many card games, each booster contains a majority of common cards, some uncommons, and one rare card. If you feel confident in the game, rather than play casual practice games, they offer a pvp mode where you can spend tickets (a mode to access special pvp games) and you can compete with another player in a best two out of three match game where the winner wins a booster for the Hidden & Dangerous expansion to the card game. These are very powerful cards. Again, I recommend doing this only when you become really good at the game and/or have a badass deck that makes even Stalin cry. 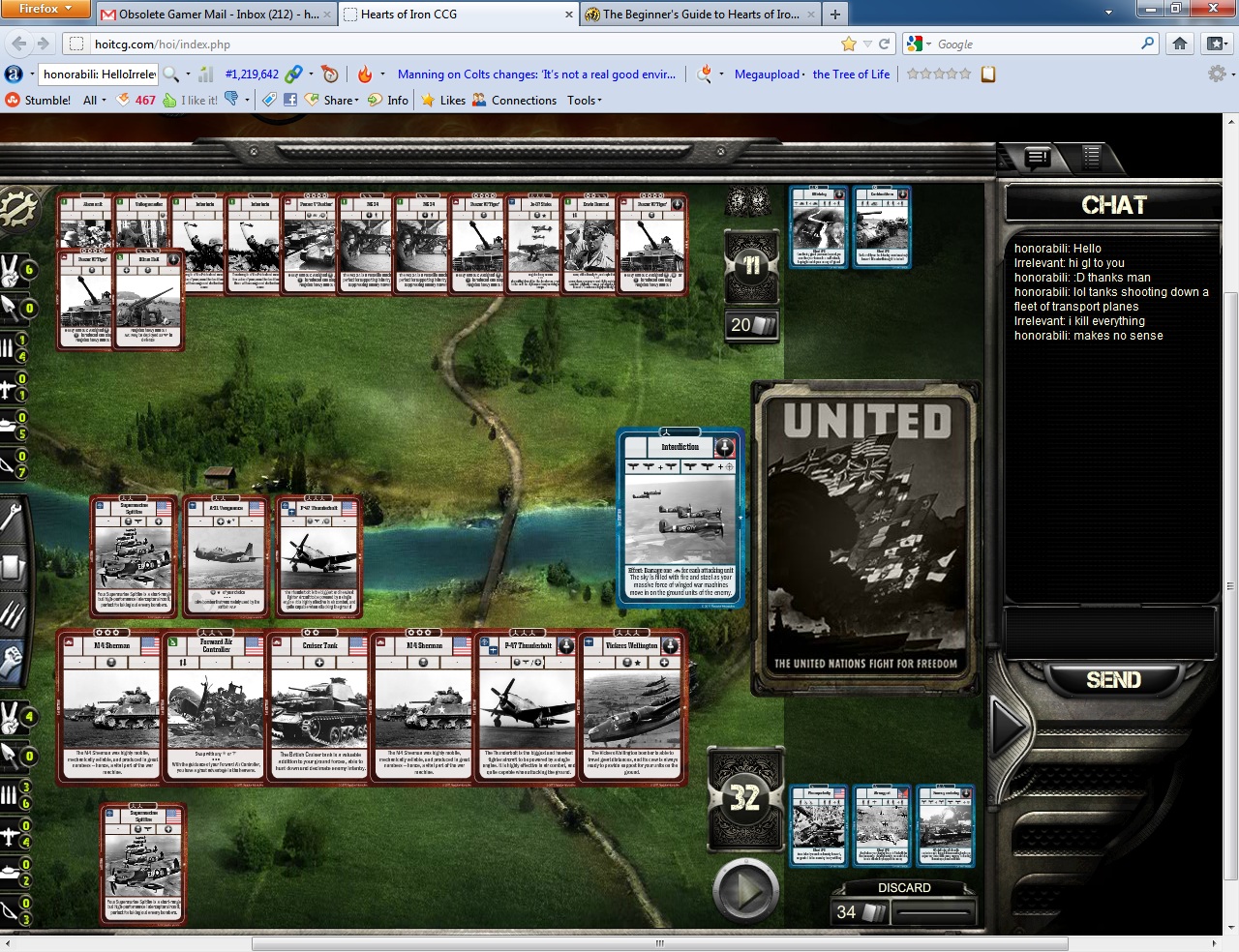 Overall, since the game for the most part is well designed, although it will have a hard learning curve for people that don’t play many card games, so I give this game a review score of 8 out of 10. Some stuff can be added like a friend’s list and some small balance issues. I will update the score if this game grows. Go play it! Oh and if you want to play against me, look for Honorabili 😀

Ten Euro-Games Every Board Gamer Should Own

The Next Evolution in the Golden Age of Board Games