With a plethora of terrible games out there, I thought the decision would be quite easy. Little did I realise, I found myself struggling to come up with one bad game that truly grated my retro gaming nerves. I could write about how terrible ET was for the Atari 2600, but I thought that everyone already knew that. Then, a light bulb went off in my head ! Why not write about a game that promised so much and delivered so little – Hard Drivin’ on the C64. Get your vomit bag out and read on……

Don’t be fooled by the “C+VG HIT” on the cover of this game. This game was more of a miss than a hit. Originally released in the arcades in 1988 by Atari Games, Hard Drivin’ was a revolutionary coin-op. It was touted as the world’s first authentic driving simulation. The game featured state-of-the-art polygon graphics and realistic force feedback controls, all designed to offer gamers a sense of what it might be like to sit behind the wheel of a high-performance car. So how do you convert this sense of driving, to an 8-bit system and still make it playable ? 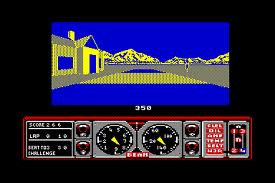 Well, in hindsight, you can’t. This conversion was an absolute catastrophe on the trusty C64. It featured hideous monochrome graphics, and the control system was a joke – any slight pressure on the joystick, and your car would instantly veer out of control.

The other frustrating aspect of the game was the sense of speed, or lack thereof. Driving at 140mph felt like my grandmother could walk faster with her walking frame. Perhaps the speedometer was measuring speed in hours-per-mile. 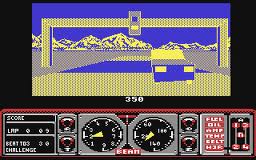 Did I mention the graphics ! It is absolutely laughable when seeing oncoming traffic – it looks like a flying double bed coming at you at a snail’s pace. Embarrassing as this game is, it was never released as a standalone game, nor at full price ! Perhaps the publisher knew it was a pile of stinking poo.

In a nutshell, this C64 conversion offered the gamer to drive a painfully slow and uncontrollable vehicle around a bland and ugly looking world. This title easily wins the award for the worst C64 arcade racer ever, period !