No longer are the days of inmates choosing normal hobbies in-between the shanking and the group showering like soap on a rope making. In the age of the gamer prisoners must have their fix of console and PC games and even cable television. Why workout and dig elaborate escape tunnels when you can file lawsuits and play D&D? 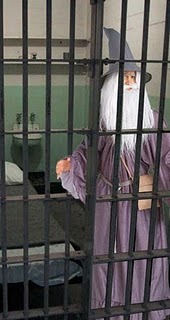 Well now at one Wisconsin prison the lawsuits are flying, but not the fireballs. Kevin T. Singer filed a lawsuit against officials at Wisconsin’s Waupun prison after a policy was initiated in 2004 to eradicate all Dungeons and Dragons game materials among concerns that playing it promotes gang-related activity.

The 33-year-old Singer is a devoted player of the fantasy role-playing game that involves recruiting others to play as a group. He argued that his First Amendment rights were being violated and demanded that Dungeons & Dragons material confiscated from his cell be returned.

But the 7th U.S. Circuit Court of Appeals ruled Monday that the prison’s policy was reasonable.

Personally I don’t understand how working out with weights is ok and playing D&D is not. I go to the gym, I see some of those guys and it must be ten times worse in prison. However, I have also seen nerd rage so it is possible there could be a hybrid between nerd and prison rage that could become unstoppable.

Gang-related activity that is one of those terms that are used far too often to keep three or more people from gathering, but this is prison and he is a murderer. Maybe they should let them play World of Warcraft. We could give them their own server called the stockades. Could you imagine the AV and Trade channel chat?

Thanks to Boston.com for the story and Youtube for the video.