I don’t know about you, but the very first thing I thought of when I realized this game existed was Leisure Suit Larry.

This game isn’t a spin of LS Larry as a renegade cop though, but instead a Lynx exclusive title. Games made specifically for the Lynx are particularly rare, and this one probably nestles between Kung Food and Blue Lightning in terms of greatness.

The first thing I noticed was that is a very well presented game, with looks that shout scream retro appeal and a rather cool sounding backing tune. Controls wise it also feels solid, but a few minutes in and you realize exactly why Dirty Larry has been long since forgotten.

First off, enemies emerge very quickly from either side of the screen and it can prove very difficult to avoid their attacks without taking damage. Like many games of this type you can creep slowly to the right and play it safe, but that just isn’t fun – which is surely the whole point of the game. 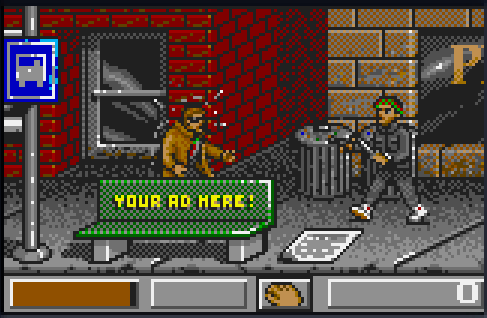 You will most likely end up struggling through to the second level (set on a subway train, see pic above), but then manage to tread no further.

There’s a certain simple charm to the game, and it’s certainly not a bad effort, but I can’t really recommend it unless it’s fairly cheap or you’re looking to amass a complete Lynx collection.

Final nail in the game’s coffin – the carts label is incredibly bland, doing nothing to help the game get noticed on your average car boot stall. Game over, Dirty Larry.