Arcades are products of a dying caste. On the decline for the past two and a half decades, it has become increasingly more difficult to find them. And when you do manage to wander into an arcade, unless it’s a Friday or Saturday night, chances are you’re all by your lonesome. The lights of machines twinkling, games beeping and talking to you as if they have been waiting for someone to show up for a very, very long time. The vestiges and ghosts of people remain only in the form of high scores, but no living souls are in sight. These are testaments to a once thriving subculture that rose in the late 70’s and waned in the mid 80’s and ultimately was dissolved by home consoles.

Go on. Hit the jump for more about unconventional arcade cabinets, broken arms and my personal quest to defeat a videogame’s arm.

I haven’t seen a picture like the one above in a non-gaming magazine, well, ever. This is a sad fact. Only a few remaining large-scale arcades, or, I should say, beacons of hope, remain. Such as Funspot in NH. In these few select locations, the people seem to remember why arcades used to be popular. For the fun and excitement of live, high-level competition and intensity of playing a game with the pressure of others watching. Will you buckle and face the humiliation of public defeat or step up and overcome the odds as you digitally etch your name into the hall of fame? 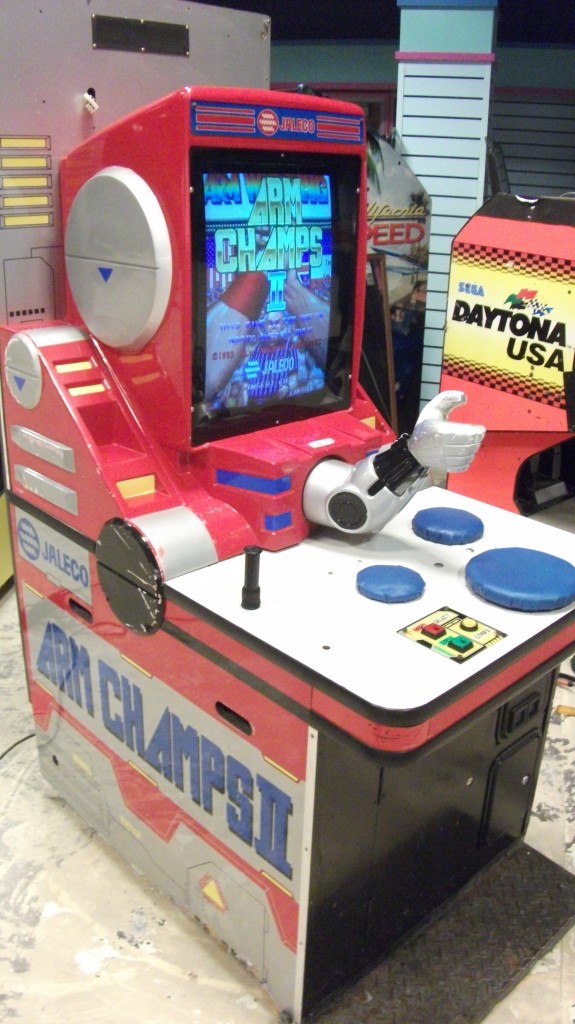 Unfortunately, in the years following the Golden age of video arcade games, arcade popularity has, overall, slipped off the map. However, new ideas have emerged in an effort to bring gamers back out of their living rooms. Deftly moving fingers and button mashing would no longer be sufficient to satiate the “masses”. Games of greater kineticism and physicality started appearing. Games that employed peripherals, such as the light guns of Virtua Cop or Big Buck Hunter, the motorcycles of The Fast and the Furious Super Bikes, the stage and pads of DDR and the arm (yes, arm!) of Arm Champs. And yes, kiddies, all of these were out pre-Wii (not to be confused with PeeWee), Kinect, Playstation Move, etc. 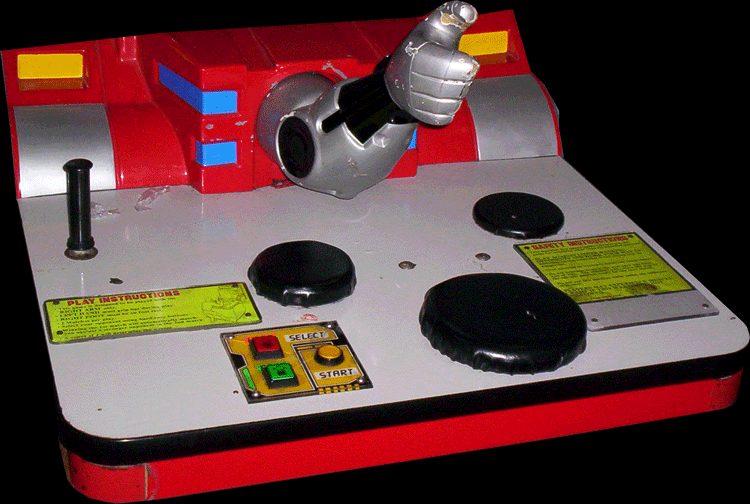 In mid-October of 2010, during a trip to Universal Studios in Orlando Florida, me and fellow contributor Jamie Richardson (Yes, we’re married. And yes, this was our honeymoon. Anything else you want to know?!) stumbled upon an arcade in the New York section of the theme park. Enchanted by the charm and nostalgia the arcade made us feel, we proceeded to haphazardly spend our hard earned money (wedding gifts) on tokens and played arcade games until our yearning hearts were content. Of all the claw cranes with console prize boxes, classic game cabinets and themed pinball machines, I was (for some inexplicable reason) most fascinated by a machine called Arm Champs II. Yep, you got that right. That’s a sequel to Arm Champs. But only equally as evil. Check out some of my masterful shaky cam of the title screen.


You can see why I had to play this. Arm Champs II is a 1992 game from Jaleco that pits you against the Terminator arm of a robot video game. That’s right, you arm-wrestle it. Little did I know at the time that people have had their arms broken from similar game cabinets in Japan, resulting in recalls. All I could think was, “Oh this looks like good, clean fun!” The surprising results of my herculean efforts can be viewed below. Thanks so much to my new wife for narrating this and humoring her pasty, frail, geek husband! It’s too late now babe!

In case you didn’t catch it at the end there, Jamie asks, “How does success feel?” To which my best reply was, “I’m sweating.” How ignorant of me. I wasn’t even thankful that I didn’t have any broken bones. 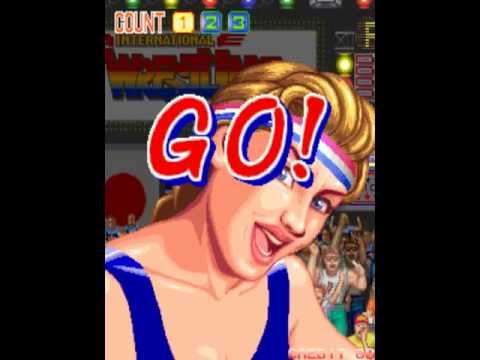 Not unlike the robot boss, I also emphatically repeated, “No way!” over and over (and over) again after my unexpected victory. I couldn’t believe that I was Number 1. What? I’m not too sure about the 1992 wiring in this cabinet. How can I, king of nerds, be the top score? Ohhhhhh wait … I get it. They must reset it every week to make kids (and weaklings) feel good about themselves. Well you know what I think about that? Mission accomplished, Universal Studios. Mission accomplished. Now I know I’m stronger than videogames.

Justin is an unabashed video game geek and has an affinity for the obscure, unconventional and indie within the gaming community. He has been playing video games ever since the twilight of the Intellivision, and writing about them since early 2010. Nowadays, he prefers cooperative games, fast-paced first person shooters, anything that takes place in space, zombies and spicy food. He's the guy who gets overly excited about games despite his pessimistic inner critic.