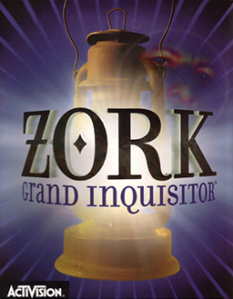 In 1996, Activision released Zork: Nemesis, a visually-stunning game, but with an overtly dark theme and a serious – even intense – game atmosphere, very unlike any other game in the Zork series.  (So dark, in fact, that the Infocom label was not included on the box!)  Nemesis was a great game, but something had to be done to bring back the humor and irreverence of all things Zork.  And so, a year later, in 1997, Activision released a new game in the Zork / Enchanter series, set 580 years before Return to Zork, and with an eye to bringing the series back to its roots – Zork: Grand Inquisitor.

The story behind Zork: Grand Inquisitor was fairly basic: magic has been banned by the merciless Inquisition, and the Dungeon Master has been trapped within a trusty adventurer’s lantern.  The player is called upon by the Dungeon Master – “I shall call you ageless, faceless, gender-neutral, culturally ambiguous, adventurer person. AFGNCAAP for short. ” – to restore the magic outlawed by the Inquisition in Quendor.  To do so, AFGNCAAP must locate the lost Zorkian magical treasures of the Coconut of Quendor, the Skull of Yoruk, and one of the Cubes of Foundation, with which a torrent of magic will be released, defeating the plans of the Grand Inquisitor and his minions.  Sounds easy, right? 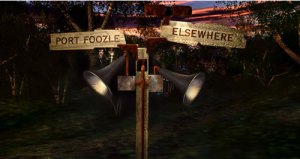 The technology used by Zork: Grand Inquisitor was a modified version of the Z-Vision game engine first used in Zork: Nemesis.  A full lateral sweep of 360 degrees was available to the player, but not any vertical movement (with a couple of exceptions based on unique scenes at GUE Tech and at the Flathead Mesa).  Human characters were portrayed by actors in full motion video, while non-human characters, such as Marvin the Goatfish, were clay models which were then digitized and animated.  Zork: Grand Inquisitor used lighting effects to draw the eye of the player to explorable areas, permitting the player to spend more time engrossed in puzzle-solving rather than the standard mouse click-fest and hunt-and-click routines of many adventure games.

The voice acting was superb, with Hollywood-class talent giving life to the various characters, which included Michael McKean (as the lantern-trapped Dungeon Master, Dalboz of Gurth) and David L. Lander (whom many will recall played Squiggy inLaverne & Shirley, as the font of ridiculous proclamations, the Voice of the Inquisition).  Some of the actors involved who had both visual and audio parts included Dirk Benedict as Antharia Jack, Rip Taylor as Chief Undersecretary Wartle, and Erick Avari, as Mir Yannick, the pompous, over-his-head but desperately attempting to fake it, Grand Inquisitor.  The effect was to improve the gameplay, especially during cutscenes, which can be excruciating when players are forced to watch the programmer’s second cousin who once acted in a school play gamely work their way through a script. *shudder*

Zork: Grand Inquisitor received good reviews (PC Gamer Magazine gave it an Editor’s Choice award and scored it at 88% in its May, 1988 issue, while GameSpot scored it as a 8.0 “Great”).  The biggest fault that reviewers agreed upon was that it seemed too short, and a longer visit in this archetypical gamer universe was wished for.  Now that’s a complaint any developer would like to hear!  It was released for both Windowsand Macintosh platforms, and played the same on either one.  Also, a DVD version was released in 1998, which also included the full version of Zork: Nemesis as an added bonus.

“Never forget who is the boss of you. ME!  I am the boss of you!“  Combining the visual appeal of Zork: Nemesis with the humor of the original series, Zork: Grand Inquisitor was a laudable addition to the Zork milieu, and certainly a worthy entry into this Game of the Week series.  Bluntly put, this game is well-worth a playthrough, especially if you are a fan of the Zork series!

Magisterrex has been gaming since the days of Pong and still owns a working Atari 2600. He tends to ramble on about retro games, whether they be board games, video games or PC games.  If you’re into classic old school gaming check out his blog here